A baby orangutan may have died from coronavirus at a German zoo, PETA has claimed – prompting an angry denial from zookeepers.

Leipzig Zoo announced the death of nine-month-old baby Rima last week, saying she was seriously ill without giving a cause of death.

Since then, PETA’s German branch has demanded an investigation into whether Rima died of Covid-19.

There have been sporadic reports around the world of the virus spreading to animals, but the zoo insists that none of its keepers or animals have been infected and says it will not waste testing capacity on the dead orangutan. Baby orangutan Rima, pictured with her mother Pini at Leipzig Zoo, died in the Pongoland enclosure last month – prompting claims by PETA that she could have had coronavirus

Rima was born in August 2019 and lived at the Pongoland ape enclosure, but zookeepers said she was in poor health and died in April this year.

‘She was so ill that she passed away overnight,’ zookeeper Daniel Geißler told regional broadcaster MDR last week.

A veterinarian had been visiting every day in the hope of saving Rima’s life after she became seriously ill, Geißler said.

Her mother Pini is said to have kept hold of Rima’s body for several days before zookeepers finally took it away.

No cause of death was given, but PETA specialist Yvonne Würz said there was a significant risk of apes being infected with coronavirus.

‘The danger of apes being infected with SARS-CoV-2 is thoroughly likely,’ she said in a statement. 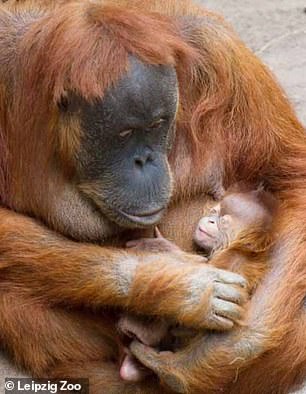 ‘As the closest relatives of humans, they are vulnerable to pathogens which cause respiratory illnesses in humans,’ she said.

Even diseases which are not deadly in humans have previously proved fatal in animals, she said.

However, she did not provide specific reasons for PETA’s suspicion that Rima may have been infected at the zoo.

PETA also used the case to highlight its wider opposition to apes being kept in zoos, saying it makes them more vulnerable to illness.

‘Because of the quarantine measures related to coronavirus, many people can imagine what it means to be locked inside for weeks at a time,’ Würz said.

A spokeswoman for Leipzig Zoo dismissed the coronavirus claims, telling Bild that no staff or animals had suffered any virus symptoms.

‘It’s difficult for us to respond to unqualified statements like this from PETA,’ the spokeswoman said.

‘The dead baby was not tested for coronavirus. She died at the start of April, and was already faint and in poor general health before that.’

She added: ‘Neither staff nor animals have had coronavirus symptoms in our zoo. Therefore, we will not use up human screening capacity with unnecessary tests.’

In any case, it is now too late to test the orangutan because Rima’s body has already been disposed of, she said.

Leipzig Zoo was closed for six weeks because of the pandemic, but partially re-opened on May 4 with new hygiene measures in place. 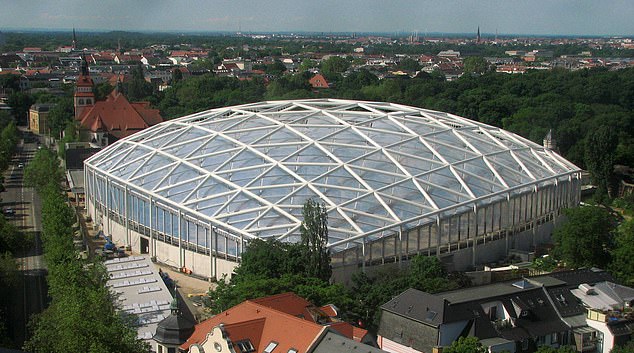 Zookeepers at Leipzig Zoo (file photo) say that none of their staff or animals had any coronavirus symptoms, rejecting claims that the orangutan could have died from the virus

Visitors have to buy tickets for a specific time slot on a particular day in order to control the number of people in the park.

Some attractions such as camel rides and a petting zoo remain closed for health reasons, according to the zoo’s website.

The extent to which animals are vulnerable to coronavirus is not yet fully clear, but there are no signs of widespread transmission in the animal world.

Some animals including a handful of cats and dogs are known to have tested positive for coronavirus after being infected by their owners.

‘Findings from laboratory studies suggest that, of the animal species investigated so far, cats are the most susceptible species’ for the virus, according to the World Organisation for Animal Health.

Dogs, hamsters and fruit bats are also thought to be susceptible, along with the rhesus macaque – a type of monkey which has been used in early vaccine tests.

There has been no evidence of pets spreading the virus to humans, and animal rights groups have urged people not to abandon their pets over virus fears.

Scientists are still trying to establish how the virus was transmitted to humans in the first place.

Suspicion initially fell on a live animal market in Wuhan, where the outbreak was first detected, but the exact origin of the virus is not yet clear.

There is some evidence that the virus may have originated in bats, possibly spreading to humans via a third species such as pangolins.