Amid extraordinary coronavirus lockdown restrictions, Brenton Tarrant, 29, appeared via video-link in the High Court at Christchurch on Thursday morning and admitted 51 charges of murder, 40 charges of attempted murder and a charge of engaging in a terrorist act. 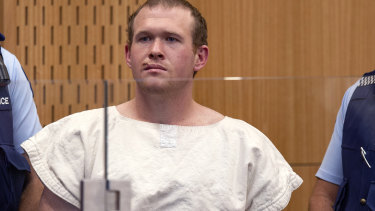 He previously pleaded not guilty to all the charges and was scheduled to stand trial on June 2.

Tarrant, who wore a grey prisoner sweater, was largely silent and emotionless throughout the hearing. He sat alone in a white room with a grey door at Auckland Prison, Paremoremo, where he's held in maximum security.

The terrorist's lawyers, Shane Tait and Jonathan Hudson, appeared via video-link from another court room.

The names of all 51 people killed were read to Tarrant, before he was asked how he pleaded to the murder charges.

He queried the name of a victim before saying, "Oh, OK. Yes, guilty".

The same process was followed for the attempted murder charges.

Justice Cameron Mander remanded Tarrant in custody, but has not yet set a date for sentencing, when the summary of facts would be made public.

​Few people knew of the special hearing, which was only scheduled late Wednesday, on the eve of an unprecedented nationwide lockdown to prevent the spread of the Covid-19 coronavirus.

Six New Zealand journalists attended. Also in court were the imams from both targeted mosques. An-nur (Al Noor) imam Gamal Fouda was visibly upset as the guilty pleas were entered.

The hearing concluded at 10.30am, but the judge suppressed the outcome for an hour to allow victims, who were unaware of the hearing, to be notified.

The decision to hold the hearing amid the national state of emergency was not made lightly.

Earlier in the week Tarrant indicated to counsel that he might change his pleas. A formal request was made on Wednesday that the matter be brought before the court.

Mander said both the Crown and defence asked to have the hearing expedited, despite the severe health restrictions.

The courts were considered an essential public service that was able to deal with "priority proceedings without compromising people's health".

The judge said he felt the court had the capacity to safely hear the matter by limiting the number of people in court. In total, 17 people were present.

It was regrettable the victims were unable to attend, but the imams were asked to be present to bear witness to the proceedings.

"It was my assessment that taking the defendant's pleas at this time was the appropriate course in the circumstances," Mander said.

"The entry of guilty pleas represents a very significant step towards bringing finality to this criminal proceeding and I considered the need to take the opportunity to progress the matter was particularly acute coming as it has at a time when the risk of further delay as a result of Covid-19 was looming as realistic possibility."

On March 15 last year, Tarrant drove from his Dunedin home to Christchurch with an arsenal of guns and ammunition he'd amassed since moving from Australia to New Zealand in 2017.

The white supremacist entered Masjid An-nur (also known as the Al Noor Mosque) on Deans Ave as Friday prayers were beginning, about 1.40pm, and opened fire – killing and wounding dozens of people.

He then drove across town to the Linwood Mosque where he continued his shooting spree.

Tarrant was arrested a short time later after his car, a gold Subaru Outback, was rammed off the road by two police officers on Brougham St as he tried to make his way to a third target, thought to be a mosque in Ashburton, where he planned to carry out another attack.

When police searched the vehicle they found several guns and petrol bombs.

In total, 51 people were killed in the terrorist attack, the worst mass shooting in New Zealand history.

Tarrant was the first person to be charged under NZ's Terrorism Suppression Act 2002.

During the hearing, Tarrant sat in a room at Auckland Prison, Paremoremo, where he's being held in maximum security.

He entered the guilty pleas about 10.20am on Thursday, but Judge Mander suppressed this until 11.30am so victims could be told.