The steward of the literary estate of Theodor S. Geisel, the real name of the late author, died in her her home at the top of Mount Soledad in La Jolla, California, at the age of 97, according to the San Diego Tribune.

Married to the giant of children’s literature since 1968, Audrey Geisel took charge of his her late husband’s legacy after his death in 1991, and two years later, she founded Dr. Seuss Enterprises.

Dr. Seuss Enterprises today posted a memorial to Audrey on Facebook calling her ‘Beloved Wife and Ardent Champion of Theodor Seuss Geisel and His Legacy’ accompanied by a tearful image of the Cat in the Hat.

Audrey Stone Geisel was born in Chicago on August 14, 1921 to a  ‘song and dance man’ father, Norman Alfred Stone, who would leave the family and mother Ruth Benson. She would be raised at times by her mother or family friends and a stint in foster care. 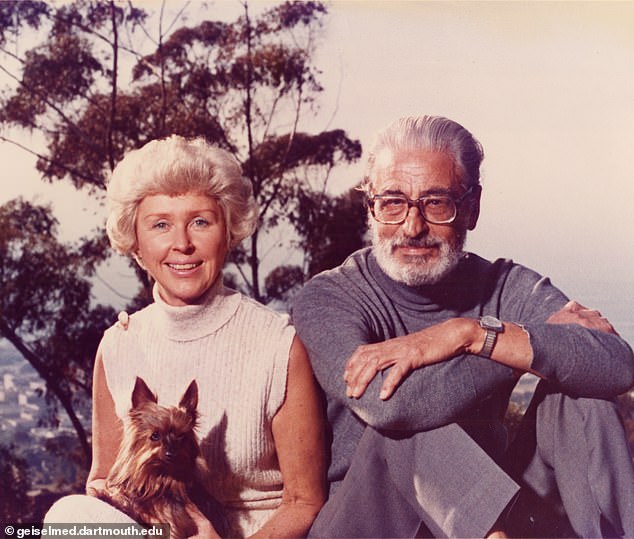 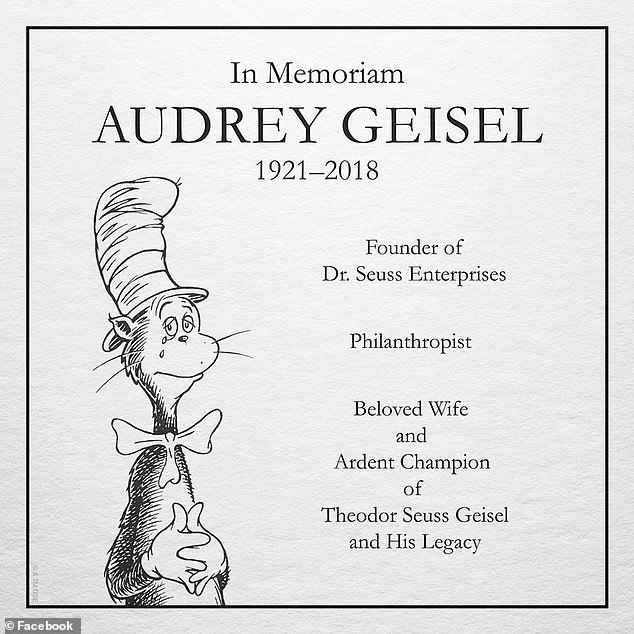 Dr. Seuss Enterprises posted a touching tribute to its founder on its Facebook page

After a difficult childhood, Audrey entered the nursing program at Indiana University where she met pre-med student E. Grey Dimond, her first husband.

They worked together at Massachusetts General Hospital until moving to Kansas, where they had two daughters.

The Dimonds then moved to La Jolla, California in 1960 where the couple met Theodor Geisel and his first wife Helen. In 1968, both marriages ended and Audrey and Theodor went on to be each other’s second and last spouses.

Following their marriage, Audrey is believed to have influenced her husband to write on more socially relevant topics like ‘The Lorax’ with its environmentalism and the anti-war ‘The Butter Battle Book’.

In shepherding Dr. Seuss’ legacy, she donated massive collections of her husband’s work products, original drawings and notes to the University of California San Diego housed in the Geisel Library. 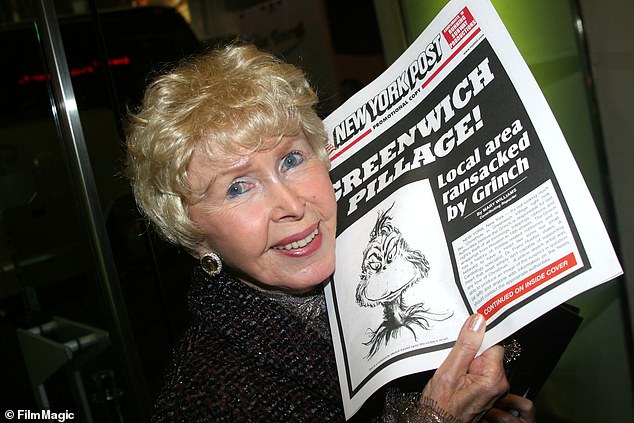 Audrey Geisel at  ‘How the Grinch Stole Christmas!’ The Musical on Broadway 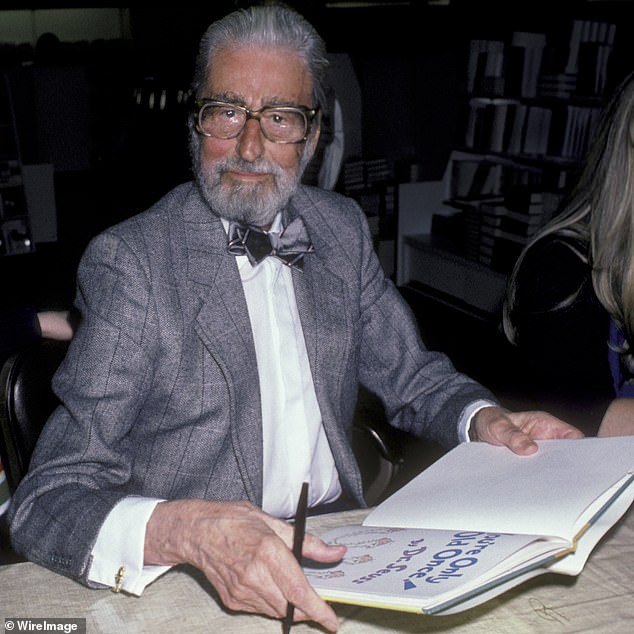 Theodor Geisel shown at a store appearance in 1986. Audrey Geisel would be instrumental in maintaining his legacy after his death only five years later

In Theodor Geisel’s hometown of Springfield, Massachusetts, she donated $1 million to the Dr. Seuss National Memorial Sculpture Garden in partnership with the Springfield Museum with bronze sculptures by her daughter, Lark Grey Dimond-Cates, according to MassLive.

‘He was so partial to Springfield,’ Audrey Geisel recounted about her late husband in an interview with The Republican in 1999. ‘Springfield held a great deal of charm for him and that showed up in his work.’

Her philanthropy would also be reflected in the renaming of Dartmouth College’s medical school in New Hampshire to the Geisel School of Medicine in 2012.

Remarkably, decades after Theodor’s death, Audrey Geisel would also discover materials in 2013 that formed the posthumous Dr. Seuss  book ‘What Pet Should I Get?’ that would be published in 2015.

The Grinch (Benedict Cumberbatch) warns his dog Max and reindeer Fred about the seductive power of the Santa cookie in ‘Dr. Seuss’ The Grinch’ 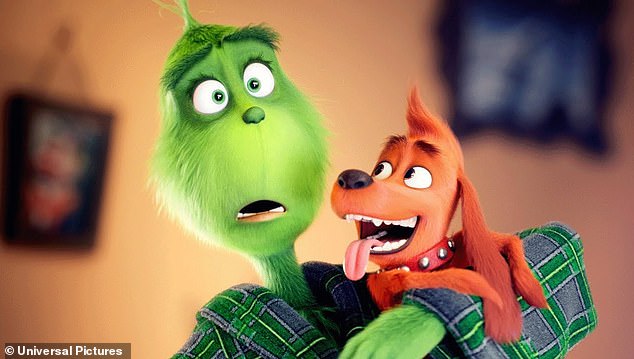 The Grinch with his dog Max. Audrey Geisel was less than thrilled with the live action ‘The Cat in the Hat’ and all properties subsequently have been animated

‘While undeniably special, it is not surprising to me that we found this because Ted always worked on multiple projects and started new things all the time—he was constantly writing and drawing and coming up with ideas for new stories,’ Audrey Geisel said in a press release following the book’s discovery.

Along with numerous publishing projects, she served as executive producer for some film adaptations of his work, most recently the animated feature film, ‘The Grinch,’ which came out last month.

She reportedly did not have affection for the live action ‘The Cat in the Hat’ film in 2003 starring Mike Myers and put an end to further live action adaptations Dr. Seuss’ work.

Audrey Geisel is survived by her daughters from her first marriage, Leagrey Dimond and Lark Grey Dimond-Cates.