This is the heartwarming moment a runner stops inches from the finishing line to turn back and carry an exhausted competitor.

The athlete had been racing in the 10K event in Bangkok, Thailand, when he stopped to help the man, who had experienced sudden fatigue known as ‘marathon bonk’ or ‘hitting the wall’.

Footage filmed last Sunday shows the Good Samaritan, who is dressed in a green vest, run back when he’s just metres from the finish line to help his exhausted rival. 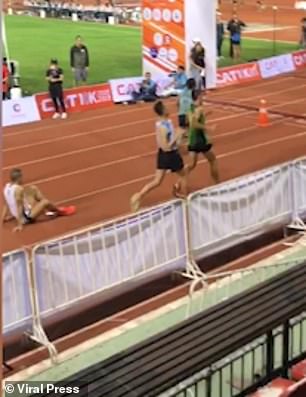 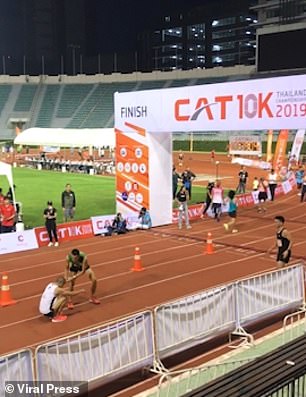 A runner competing in a 10k event in Thailand collapsed less than five metres from the finish line. He was helped by a rival runner who stopped and ran back before he crossed the line

The video starts with runners streaming past the man, who is on crouching and struggling to stand up.

The finish line is seen less than five metres away.

When the runner in a green vest jogs past, he stops and tries to help by pulling his outstretched arm and pushing his back.

Two other runners who allowed themselves to cross the line first then run back to help as well.

A fourth man, one of the track attendants, also offers his assistance and the four of them together are able to coax the runner – who is too weak to stand – over the line.

The exhausted marathon runner was later taken to the first aid room at the stadium. 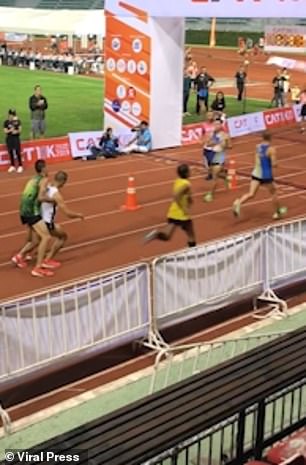 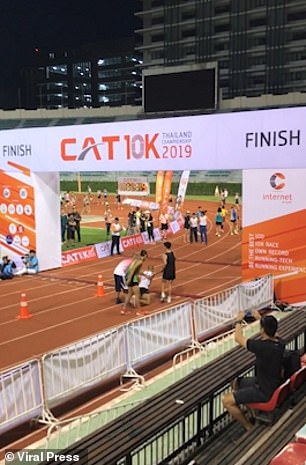 The helpful man, dressed in a green vest, tried to lift the exhausted runner to his feet. He was joined by two other runners who had finished the race

Spectator Lalita Photchimphlee, 22, filmed the touching moment while she was in the crowd at the 10K Thailand Championship 2019.

She said: ‘Marathon bonk is like a cramp but it feels so much worse and lasts longer than normal cramps. It can happen to any runners no matter how strong or healthy they are.

‘That man didn’t hesitate to help his colleague even though he knew that he was going to waste his recording time. His action is just really impressive.’ 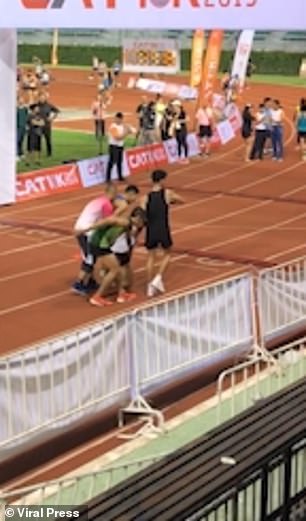 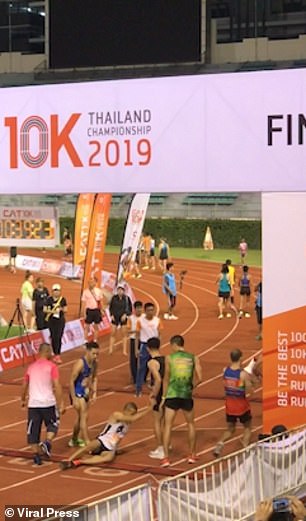 One of the race attendants also came to help. The four of them together coaxed the man over the finish line

‘Marathon bonk’, or ‘hitting the wall’, refers to when glycogen stores, which supply the body’s muscles get severely depleted in runners and experience sudden fatigue and loss of energy.