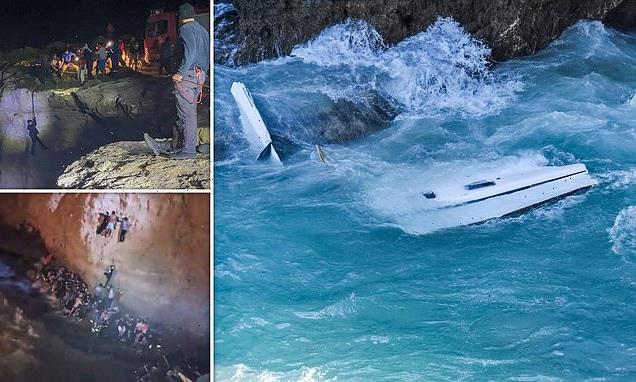 At least 18 migrants have died in the Mediterranean Sea after Greek coastguard launched a desperate search when two sailboats clammed into rocks during a storm.

Eighteen victims, nearly all of them women, drowned and a further 30 migrants are still missing after gale force winds of up to 45mph caused havoc off the island of Lesbos late last night.

The bodies of 16 women and a 15-year-old boy were recovered from the area, close to Turkey, coastguard spokesperson Nikos Kokkalas told state TV.

Divers also recovered an adult male body during the afternoon, he added.

Earlier, the coastguard were alerted to a sailing boat in distress off Kythira island’s Diakofti port, south of the Peloponnese peninsula/ The vessel had around 95 people on board.

Some survivors made it to shore and dramatic footage released by the coastguard showed them being winched up the vertical face of a cliff, some barely managing to hold on amid battering waves.

The fire service and police reported 80 asylum seekers from Iraq, Iran and Afghanistan made it ashore during a major rescue operation.

Kythira mayor Stratos Harhalakis said the coastal spot was ‘the worst possible place on the island’ for a ship to sink. 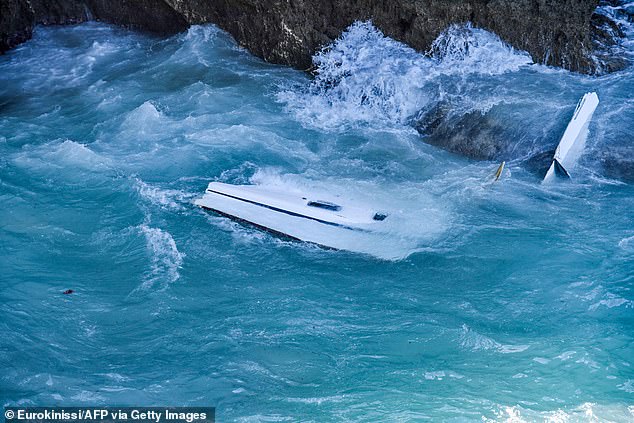 Debris of the boat carrying migrants are pictured off Cythera Island, south of the Peloponnese peninsula 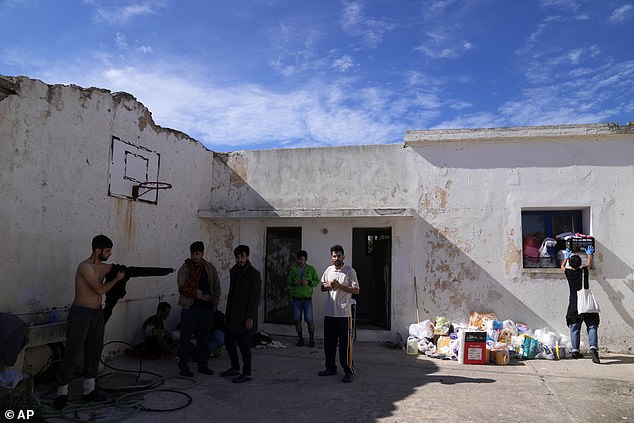 Migrants, most of them from Afghanistan, gather at an old school used as a temporary shelter on the island of Kythira, southern Greece 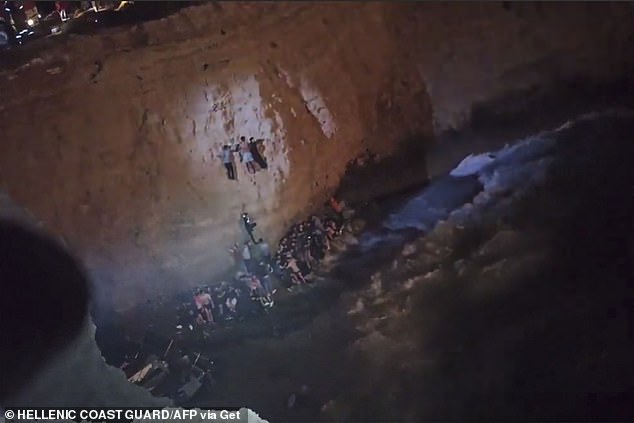 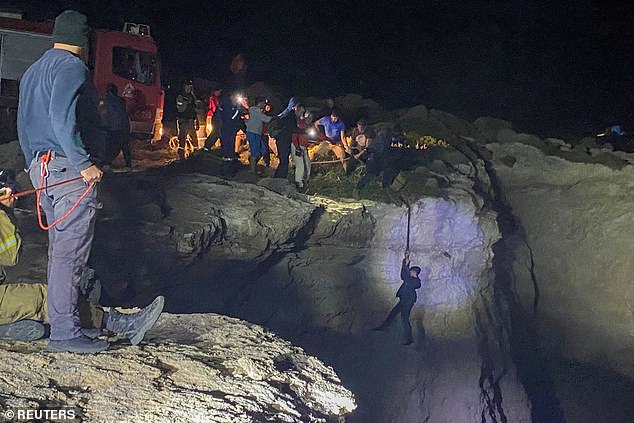 A migrant hangs from a rope during a rescue operation following a shipwreck, on the island of Kythira

He added: ‘Nobody could approach (them) by sea, it was incredibly difficult.’

Meanwhile, the survivors recalled being so tightly crammed below deck on one of the yachts that there was only space to stand.

Ahmad Shoaib Noorzaei, a survivor from Arghanistan, said: ‘From the first minute, we thought that maybe we will face some problems.

By late last night, their third at sea, the captain of the yacht is said to have lost his bearings. Instead of safely rounding Kythira, with a clear passage to Italy ahead, the vessel was swept into a rocky inlet surrounded by forbidding cliffs.

Abdul Ghafar Amur, another survivor from Afghanistan, said: ‘We tried to save our lives, but most of our friends, they have died.’

The survivors managed to cling to the rocks while nearby villagers, who poured out to help, eventually pulled them to safety with ropes.

At first light, at least four bodies were seen bobbing under the cliffs among the flotsam from the shipwreck.

And by this evening, 80 survivors were accounted for from Afghanistan, Iraq and Iran – including 17 boys and a girl. 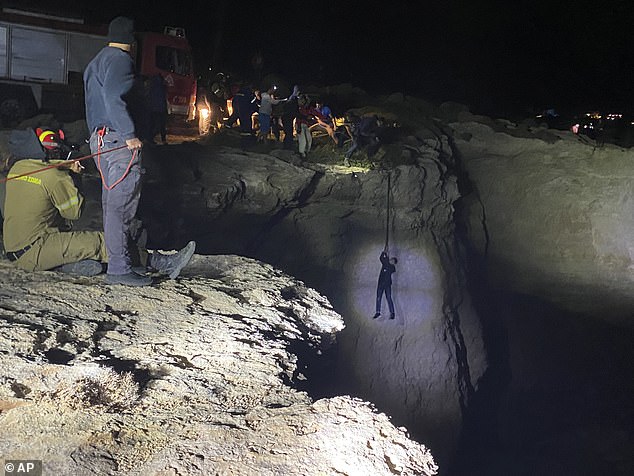 Authorities said that the boat was carrying up to 100 migrants when it hit rocks off the village port of Diakofti and sank in high winds of up to 45mph late last night. Pictured: Rescuers save a migrant as they search for survivors after the boat sank 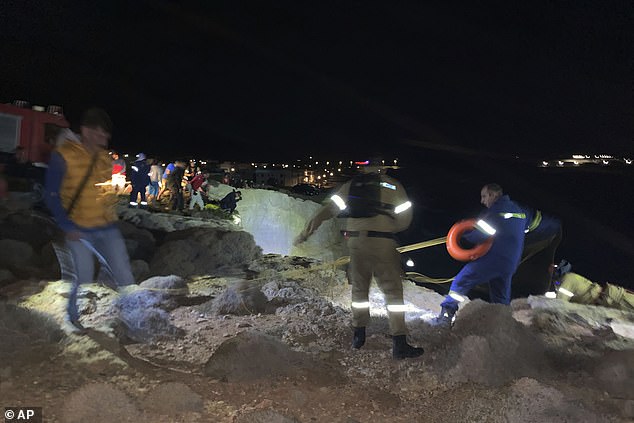 The coastguard did not have additional information on possible casualties or on the nationality of the migrants. Coastguard vessels, private boats and a rescue helicopter are involved in the search for migrants off the coast of the island of Kythira, 140 miles south of Athens. Pictured: The large-scale rescue operation 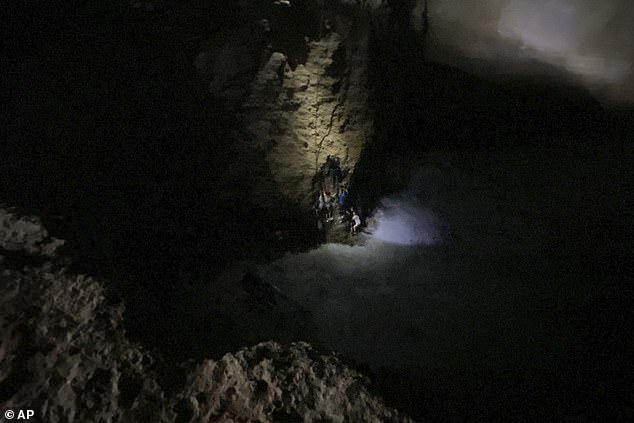 By early this morning, 30 people were rescued, according to officials, who gave no other details on the missing. Pictured: Migrants at the bottom of a cliff after their boat sank and rescuers work to reach them 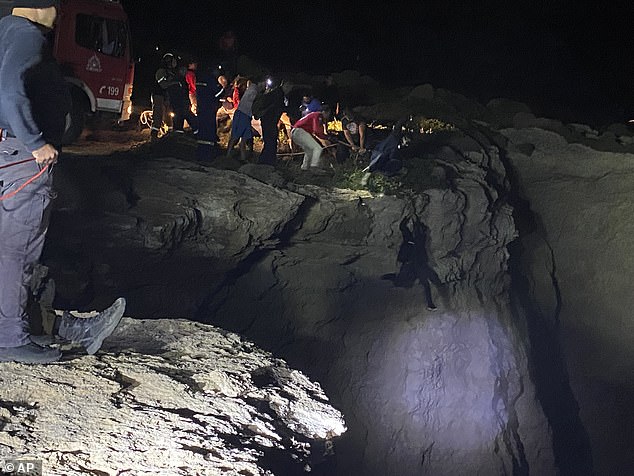 Authorities and local residents save a migrant during a large-scale rescue operation on the island of Kythira, pictured

Speaking from a schoolhouse being used to provide shelter for the migrants, Mr Amur said the coastguard had arrived ‘two or three hours too late’.

He added: ‘During these three or two hours, most of women died. Young guys and old men, we couldn’t do anything for them. We saw just how they died.’

Amur said he paid smugglers $9,000 to be shipped from Turkey to Italy, a sum which matched accounts by other survivors.

The fate of the yacht’s captain was unknown, though some of the survivors said he was lost in the wreck.

Meanwhile, Greek Prime Minister Kyriakos Mitsotakis deplored the ‘tragic loss of life’ and called for ‘much more substantial cooperation’ to avoid such disasters.

Greece has seen increased migration traffic this year, and accuses Turkey of failing to enforce a 2016 agreement with the EU to keep migrants from sailing on to Europe.

Migration Minister Notis Mitarachi also tweeted after the two shipwrecks that Turkey should ‘take immediate action to prevent all irregular departures due to harsh weather conditions’.

Mitarachi said: ‘Already today many lives lost in the Aegean, people are drowning in unseaworthy vessels. EU must act.’

The coastguard has said it has rescued about 1,500 people in the first eight months of the year, up from fewer than 600 last year.