When Diana Tandia makes jollof rice, she lets it burn a little at the bottom of the pot, just enough so that smoke rises to possess every grain.

At Berber Street Food, the tiny restaurant she opened in the West Village in September, the rice arrives stained reddish-orange, with smoke still in its soul. After a wallow in melted tomatoes, bay leaves and thyme, it’s as rich as — if daintier in scale than — the grand heaps served at West African restaurants in Harlem or the Bronx.

Other dishes draw from the cuisines of North Africa, like thumb-lengths of lamb kofta, the meat vivid with mint and a daub of housemade harissa, profoundly earthy and sunny at once. Ms. Tandia’s harissa is an essential contribution to the city, evoking the fervor of chiles without their spiky heat.

Thankfully, more harissa comes as the base in her reinterpretation of a tagine, with couscous packed inside squat pillars of bell peppers and squash. This is finished with drops of argan oil, derived from the nuts of trees that grow in southwestern Morocco, holding off the encroachment of the desert. 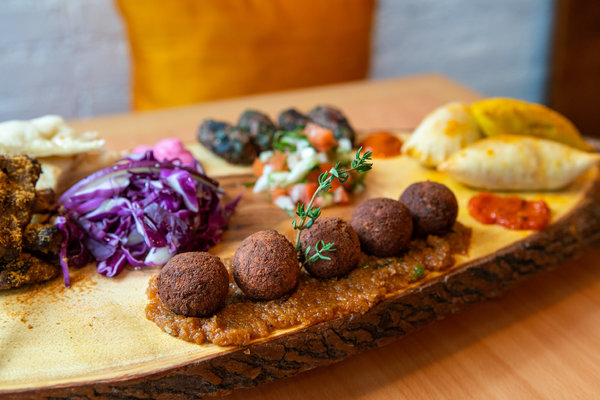 Ms. Tandia’s roots lie in both North and West Africa. She grew up in Nouakchott, the capital of Mauritania, and was raised in multiple traditions: Berber and Fulani on her mother’s side, and Sarakhole with Senegalese ancestry on her father’s.

But her menu also reflects her time as a college student in New York, when she supported herself as a waitress at the haute French restaurant Daniel. (“I didn’t speak much English, so I could only work at French restaurants,” she said.) She later returned to Daniel as a line cook, and did stints in the lofty kitchens of Gramercy Tavern and Per Se.

Berber Street Food is humbler, with a fast-food setup of a menu on the wall and orders placed at the counter. There are just four little tables and a few stools at a ledge positioned uncomfortably in the path from door to cash register.

And yet: It’s elegant, the tables set with baskets of brilliant-hued peppers and appetizers laid out on rustic wood-slice boards. Ms. Tandia’s cooking is thoughtful, with none of the haste and bravado implied by the words street food — only the punch of flavor.

Fataya, listed on the menu as Senegalese empanadas, are half-moon pies, traditionally fried. Ms. Tandia bakes hers and uses a mixture of crumbly short crust and laminated dough, butter sealed repeatedly into its folds, to achieve buoyancy.

Accara are made of black-eyed peas soaked overnight (“no shortcuts,” she said), ground with thyme and cayenne, then rolled into balls and left to settle; if you cook them right away, she explained, they go flat. They’re not intended for a fork: Just dip them in the accompanying meld of tomato paste, lemon zest and raw onion pounded until silky. There’s habañero in there, a faint needling, and a fistful of cilantro for brightness.

An African street burger brings together a number of Ms. Tandia’s influences, the ground sirloin laced with herbes de Provence and topped by a piri-piri of uncompromising African bird’s-eye chiles. French fries get a dusting of dried lavender, delicate and summery.

Everything is delicious, if diminutive. The burden of renting in the West Village occasionally shows through: The $24 Berber Feast isn’t quite as substantial as the name and price suggest, small knobs cut from a roasted leg of lamb where, in the depths of Brooklyn, a giant whole shank might land on the plate.

But for this neighborhood, Berber Street Food is a gift. Diners in search of a quick lunch may assemble colorful bowls labeled Afro-fusion, although Ms. Tandia prefers to think of them as “universal.” Choices include gingery fried rice; a curry anchored to no one place, uniting coconut milk and lemongrass with the thyme and bay leaves of Ms. Tandia’s childhood; and a black-eyed pea stew so deep, eating it feels like sinking in, as if for a moment you could opt out of time.

As for the charred, crackly bits of jollof rice left at the bottom of the pot, known in Africa variously as xoon, kanzo and cro cro, Ms. Tandia said with a sigh, “I can’t serve burned rice to my customers.” Instead, she and her staff eat it in the back, in secret, savoring the best part.