This is the astonishing moment a group of African migrants sprinted up a Spanish beach after jumping out of a rickety wooden boat, leaving locals stunned.

Around 30 people, including three children, were filmed diving out of the boat on the shoreline before running up the sand and disappearing up the beach in broad daylight.

Many of the group wore thick coats and clutched belongings or carried rucksacks.

The surreal scene, a replay of incidents in summer when African migrants tore past tourists as they topped up their tans, happened at Santa Maria del Mar Beach in Cadiz in the south-west of the country. 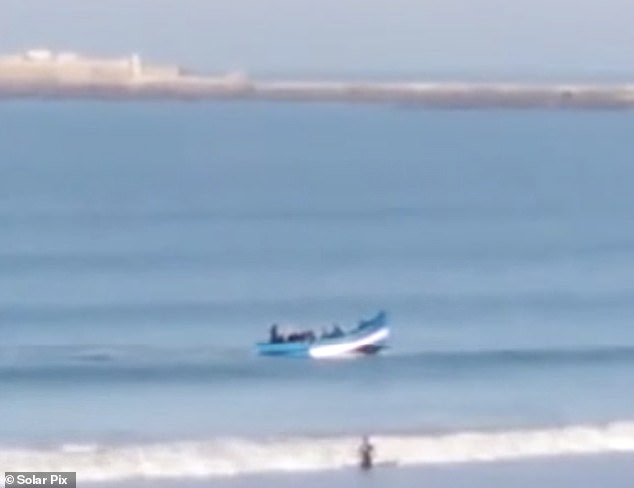 The small wooden boat was first spotted as it came towards the beach, clearly packed with people

Locals filmed the occupants of the boat, known in Spanish as a patera, with one giving a running commentary as he watched the arrival with a Sunday morning surfer and said: ‘This is live. Look, how amazing! It’s just arrived. At Santa Maria del Mar.

Eighteen of the migrants, including three children, were intercepted by police in the streets of Cadiz.

One was a five-year-old who had travelled with his mother. Officers said all those caught were Moroccan.

The whereabouts of the rest were unclear this morning, although police sources said that because they were also thought to be from Morocco, they may have had relatives living in Cadiz who were waiting for them to arrive and had arranged to pick them up. 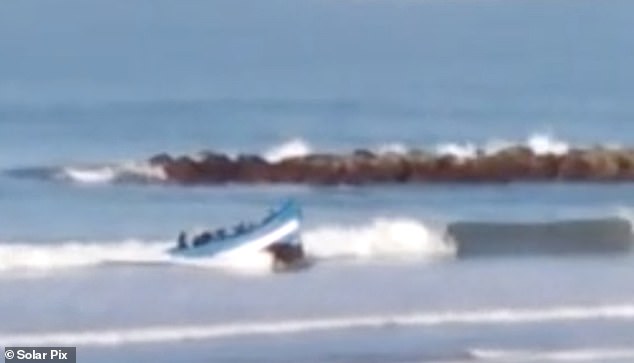 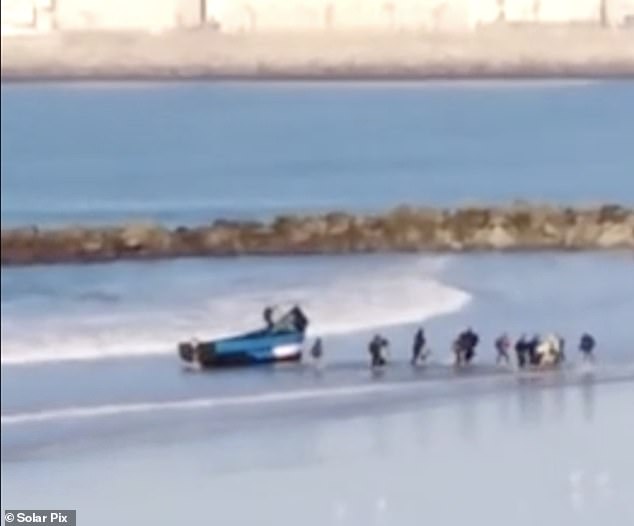 Men, women and children jumped from the vessel and began to trudge their way up the sand

One of the surfers who witnessed the boat arriving handed police a GPS device he found in the abandoned vessel.

Sunday morning’s incident coincided with the release of Spanish Ministry of Interior figures showing 48,376 irregular migrants reached southern Spain by sea and mostly in pateras to December 3 of this year, nearly triple the figure for the whole of 2017.

Most – 21.4 per cent – were Moroccans followed by Guineans and Malians.

France’s far-right leader Marine Le Pen and white supremacist David Duke, a former leader of the Ku Klux Klan, were among those who tweeted their congratulations after the VOX triumph. 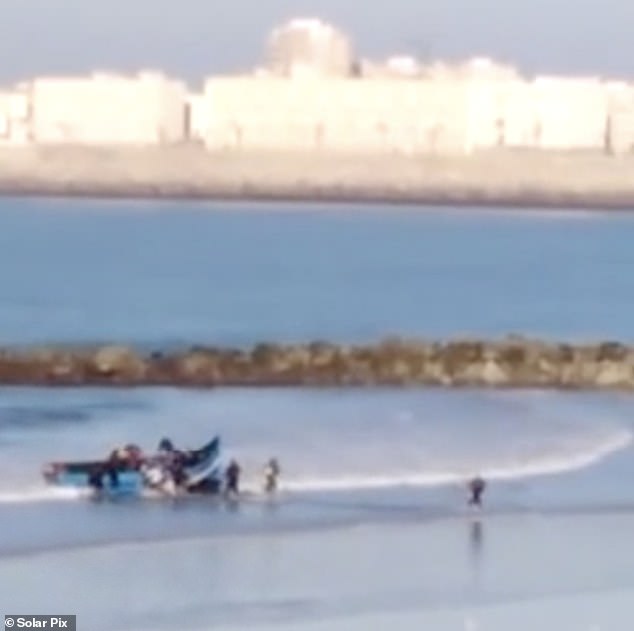 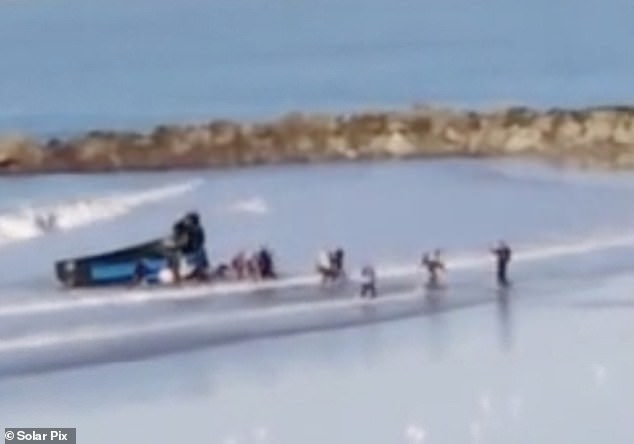 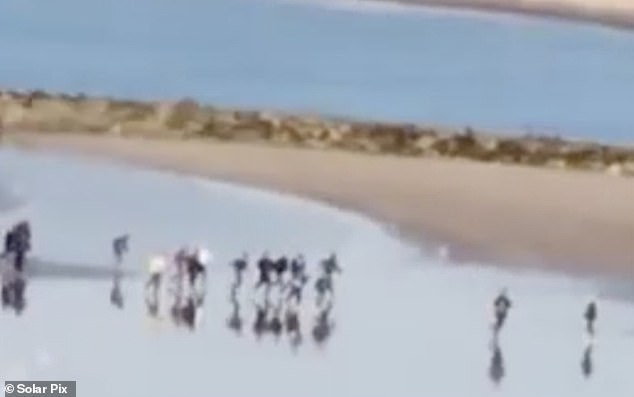 Locals were stunned as they filmed the large group making their way up the sand. Recently, scenes like this have become more frequent in Spanish coastal towns

In August holidaymakers watched on as a group of African migrants reached a packed tourist beach on Spain’s Costa de la Luz.

The semi-inflatable zodiac carrying nearly 50 Moroccans including around ten children reached Barrosa Beach, considered to be one of the best beaches on Spain’s southern coast and near a purpose-built residential and tourist resort called Sancti Petri. 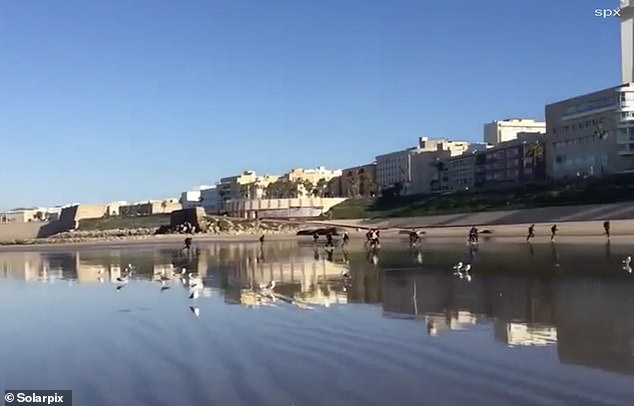 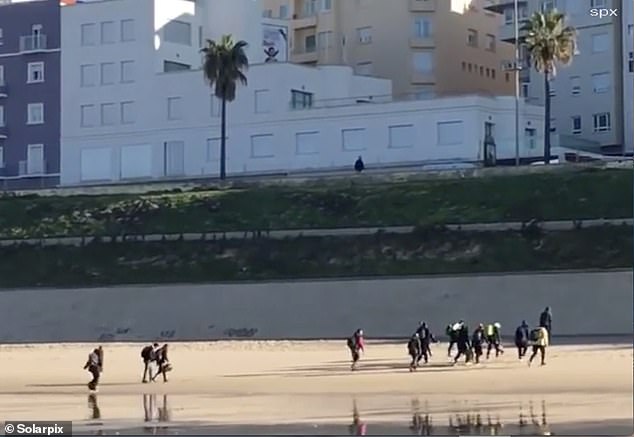 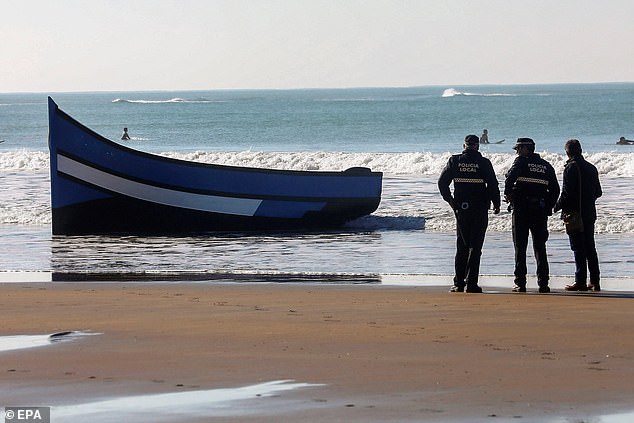 One of the beachgoers filming the surreal scene could be heard saying in Spanish as the migrants leapt from their boat: ‘Look how they’re running towards the Sancti Petri Melia Hotel.

In July around 50 migrants were filmed landing on a packed beach and sprinting up the sand at a beach in Zahora a half-hour drive away and close to the headland of Cape Trafalgar near where Horatio Nelson defeated Napoleon’s combined Spanish and French fleet.