Rimbo, Stockholm – Representatives from Yemen’s government and Houthi rebels are attending UN-sponsored talks in Sweden for a second day, but back home a Saudi-UAE coalition has continued with deadly air strikes.

The Houthi-affiliated Al-Masirah news outlet reported early on Friday that at least three air strikes targeted Hodeidah’s al-Tahita district, hours after representatives from the Yemeni government and Houthi rebels met for the first day of talks in Rimbo, a town around 50km north of the Swedish capital Stockholm.

According to Al-Masirah, at least 60 air strikes had targeted Houthi-held areas over the past 72 hours, with three women reported killed.

Al Jazeera could not independently verify the reports.

Aid agencies have long warned that fighting in Hodeidah, a lifeline for millions of Yemenis, risks escalating the humanitarian crisis in the country, where about half the population – some 14 million people – could soon be on the verge of famine.

The UN special envoy for Yemen, Martin Griffiths, has been seeking to introduce a set of confidence-building measures at the talks that will eventually pave the way for future negotiations between officials from President Abd-Rabbu Mansour Hadi’s government and representatives from the Houthi movement.

The warring sides are not expected to meet face-to-face, but the expected confidence-building measures will include negotiating a ceasefire in the port city of Hodeidah, large-scale prisoner swaps, the reopening of Sanaa international airport and the payment of salaries to civil servants in Houthi-held areas.

The Yemeni government proposed re-opening Sanaa airport and on Friday said that one of the conditions was that planes be inspected in Aden or Seiyoun airport.

During opening remarks at the talks on Thursday, Yemen’s government said it signed a large-scale prisoner swap with the Houthis as part of a “confidence-building measure”.

Earlier this week, reports suggested as many as 2,000 pro-government forces could be exchanged for 1,500 Houthis.

The breakthrough came a day after the Saudi-UAE alliance allowed 50 wounded rebels to be evacuated from Sanaa to Oman on a UN-chartered plane for medical treatment.

Hamza al-Kamali, a member of the Yemeni government delegation to the talks, said while the priority for his government was addressing the country’s “dire humanitarian situation”, the coalition planned to continue targeting Houthi-held areas, irrespective of what developments took place at the talks.

“We don’t believe in a short-term peace. The Houthis will use a truce or a de-escalation as a tactic. They will use the time that we are here to advance on the ground. That’s why we’re engaging in defensive military actions. The air strikes are defensive tactic the stop the Houthis from transferring weapons from one area to another,” he said.

Since 2014, Yemen has been wracked by a multi-sided conflict involving local, regional, and international actors.

The Houthis, a group of Zaidi Shia Muslims who ruled a kingdom there for nearly 1,000 years, exploited widespread anger against President Hadi’s decision to postpone long-awaited elections and his stalled negotiations over a new constitution.

They toppled his government in 2015, triggering one of the world’s worst humanitarian crises.

A coalition led by Saudi Arabia intervened on March 26, 2015, at Hadi’s request after the Houthis continued to sweep the south and threatened to conquer the last government stronghold of Aden.

Since then, the US has been helping the coalition, which now primarily consists of Saudi Arabia and the UAE, with weaponry and logistical support.

Launching more than 18,000 air raids, the strikes have resulted in mass civilian casualties, with weddings, medical facilities and funerals not spared from the bombardment.

“Our forces are thee kilometres form the port. We came here in order not to bring the battle to that area so that they can deliver it to the UN envoy as they promised,” Kamali said.

Following months of deadly battles in Hodeidah, the Houthis have told Al Jazeera they are willing to hand over the strategic port to the UN. They have, howver, not commented on whether they will leave the city, one of the demands of the government.

Asked about a Houthi proposal to form a presidential council without President Hadi, Kamali said the idea crossed a well-established “red line”.

“We need to go back to the political track we had in 2011 – that is the best solution to ending Yemen’s crisis. President Hadi is off the table. He will be the president until we have elections after finishing steps from the Gulf Initiative.”

Griffiths, who has engaged in intensive diplomacy between the two sides for months, called Thursday’s meeting “a milestone” and urged the two sides to “deliver a message at peace”.

According to aid groups, the stakes could not be higher. An estimated 56,000 people have been killed in the fighting, while as many as 85,000 children may have already died from hunger.

The beginning of the talks coincided with the release of a World Food Programme survey which found 20 million people are going hungry and are in urgent need of food assistance. 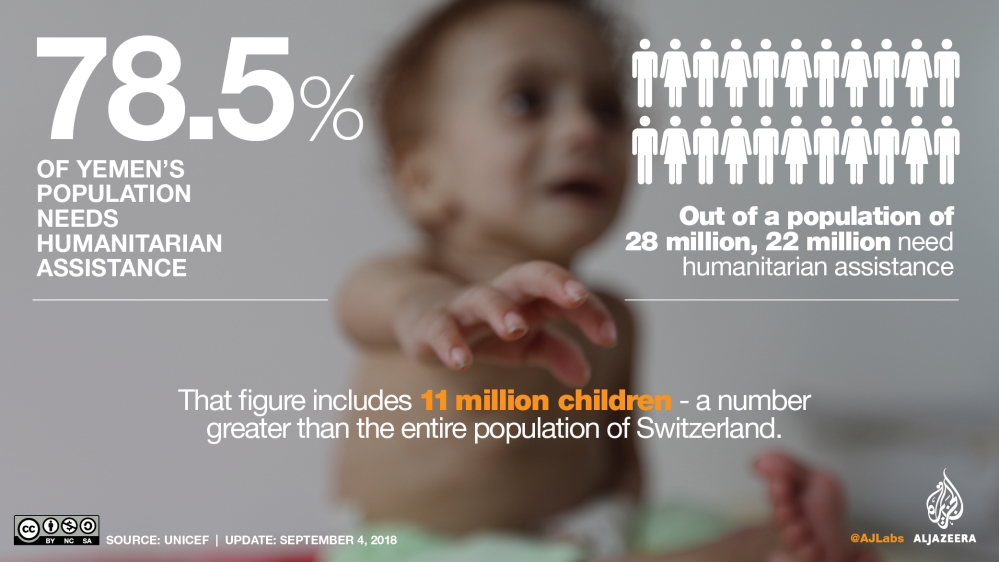