CARACAS (Reuters) – Venezuelan President Nicolas Maduro oversaw a display of the army’s Russian hardware on Sunday, with anti-aircraft flak and tank rounds pounding a hillside to show military force and loyalty in the face of an international ultimatum for new elections.

Maduro, 56, is confronting an unprecedented challenge to his authority after opposition leader Juan Guaido declared himself interim president citing a fraudulent election. Guaido has won wide international support and offers amnesty to soldiers who join him.

Early on Sunday, alongside Defense Minister Vladimir Padrino, Maduro watched a platoon of soldiers release volleys of rocket-propelled grenades, machine-gun anti-aircraft fire and tank rounds at hillside targets, the Russian ordnance kicking up clouds of dust at the Fort of Paramacay, an armored vehicle base.

Maduro said the display showed the world he had the backing of the military, and that Venezuela’s armed forces were ready to defend the country. Maduro says Guaido is taking part in a coup directed by Trump’s hardline policy advisers, who include Cold War veterans John Bolton and Elliott Abrams.

“Nobody respects the weak, cowards, traitors. In this world, what’s respected is the brave, the courageous, power,” Maduro said.

“Nobody should even think of stepping on this sacred soil. Venezuela wants peace … and to guarantee peace, we have to be prepared,” he said. From Feb. 10 to 15, the military is planning larger exercises that Maduro described as the “most important in the history of Venezuela.”

The show of force was accompanied by a government publicity campaign online based on the slogan “Always Loyal, Never a Traitor,” and followed a high-profile defection by the country’s top military diplomat in the United States on Saturday.

The Fort of Paramacay, about two hours west of the capital, Caracas, was itself the site of an uprising in 2017, when about 20 soldiers and armed civilians attacked the base. The leader of the attack, which was quickly subdued, said he was calling for a transitional government.

Maduro on Sunday denounced an alleged conspiracy aimed at spreading rebellion in the army, saying thousands of messages were being sent to soldiers every day over WhatsApp and other social media platforms from neighboring Colombia. He later jogged with soldiers and visited a navy base.

Guaido also sent a message to the military on Sunday, asking for support and ordering it not to repress civilians during an event in which supporters handed out copies of a proposed amnesty for people accused of crimes in the Maduro government.

Both Russia and China are major creditors of Venezuela. Since the government of Maduro’s late mentor, Hugo Chavez, the OPEC nation has invested heavily in Russian weaponry, including Sukhoi fighter jets and heavy armor. 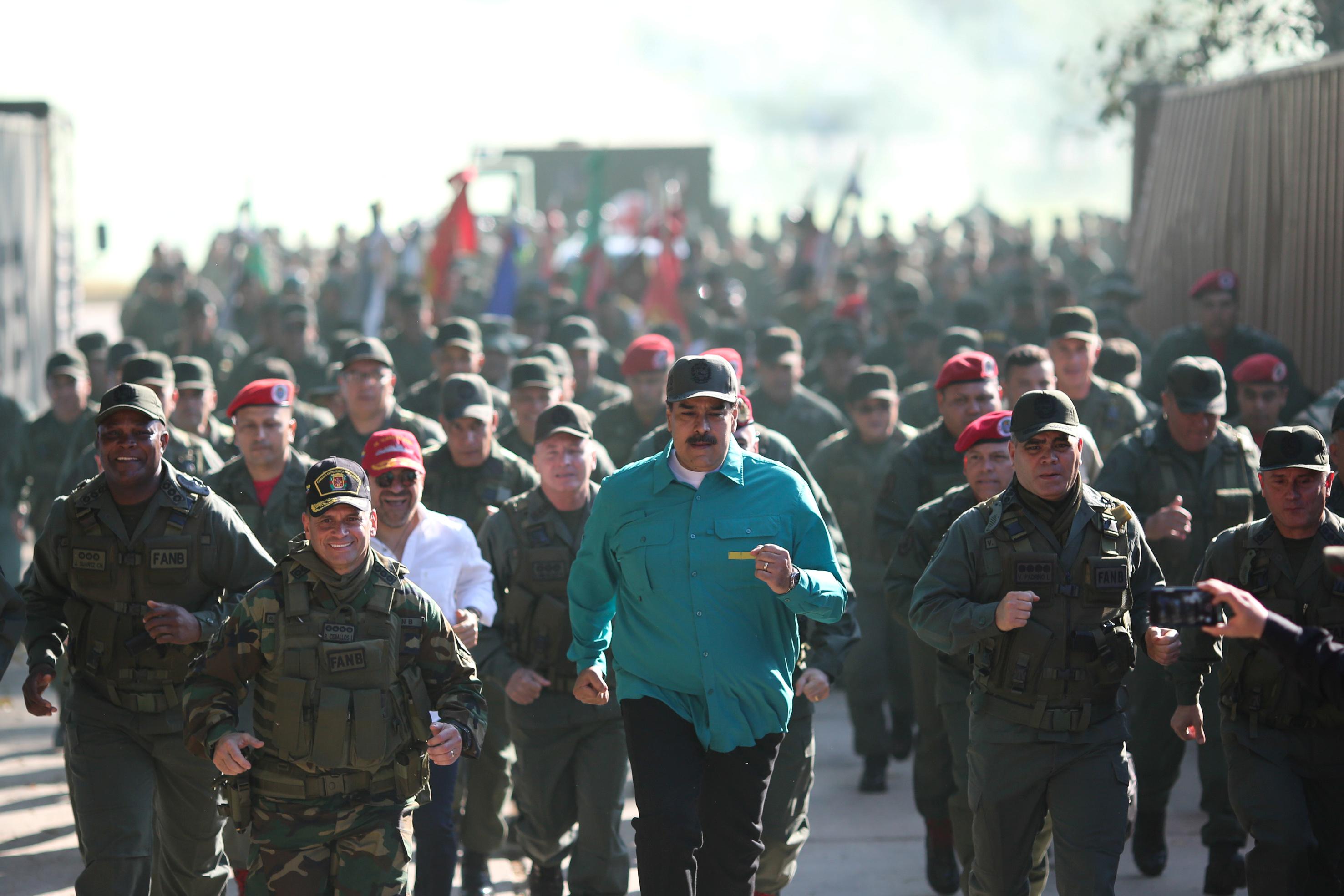 The strategic alliance was in evidence last year, when two Russian nuclear-capable bombers landed in Venezuela. Reuters reported on Friday that private military contractors who do secret missions for Russia flew into Venezuela to beef up security for Maduro.

In an interview that aired on Sunday, Maduro rejected a European ultimatum to call elections within eight days and said Guaido violated the constitution by declaring himself interim leader.

“Fortunately, we don’t depend on Europe. And those arrogant, overbearing attitudes, looking down on us, because we are ‘sudacas,’ inferior to them,” he told CNN Turk.

“The leaders of Europe are sycophants, kneeling behind the policies of Donald Trump,” he said, adding he was open to dialog and that meeting Trump was improbable but not impossible.

Washington urged the world on Saturday to “pick a side” on Venezuela and financially disconnect from Maduro’s government.

Bolton, the White House national security adviser, warned on Sunday against violence or the intimidation of American diplomats in Venezuela or Guaido, saying such action would trigger a response from the United States.

Venezuela has sunk into turmoil under Maduro, with food shortages and protests amid an economic and political crisis that has sparked mass emigration and inflation seen rising to 10 million percent this year. 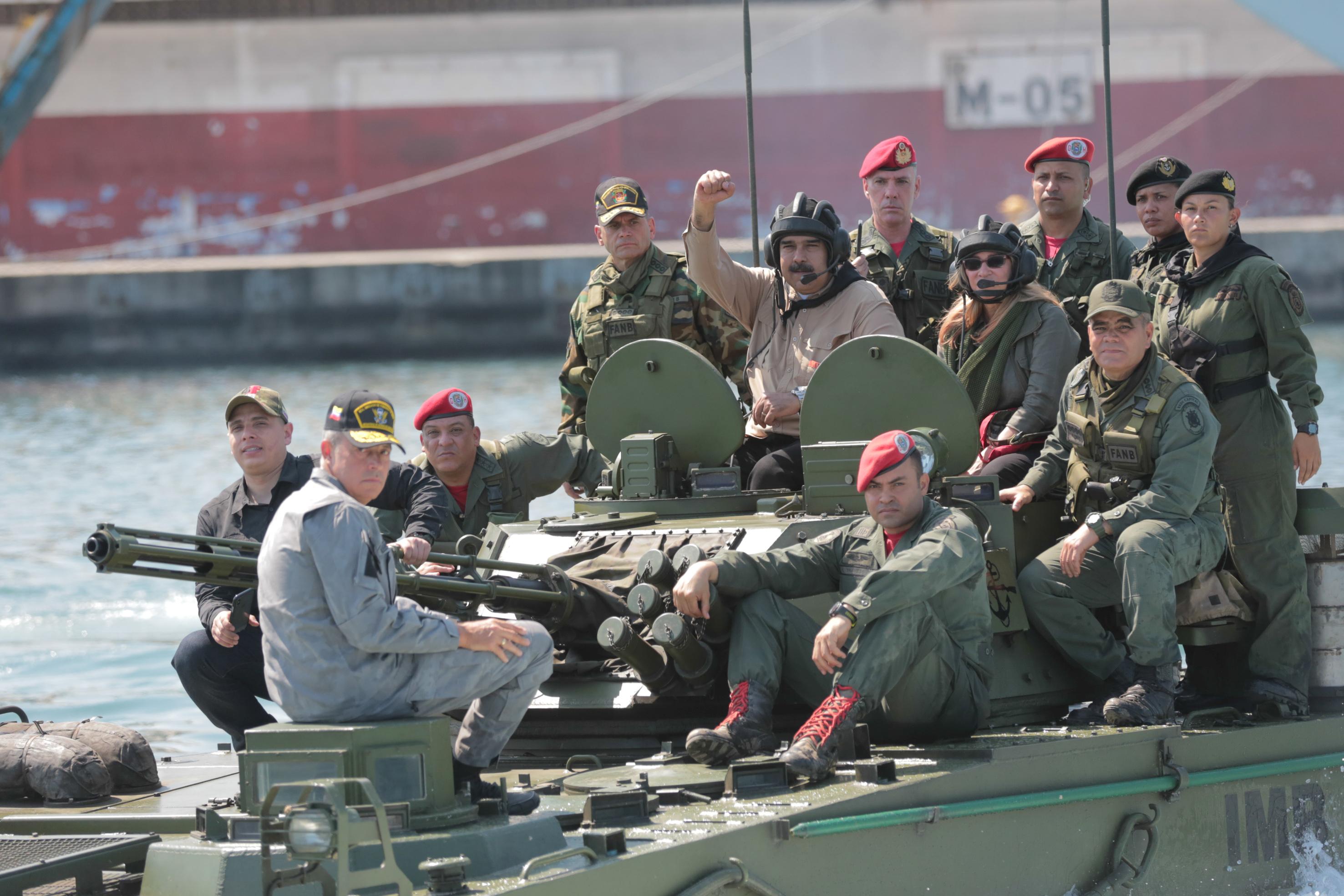 Britain, Germany, France and Spain all said they would recognize Guaido if Maduro failed to call new elections within eight days, an ultimatum Russia said was “absurd” and the Venezuelan foreign minister called “childlike.”

The United States, Canada, most Latin American nations and many European states say Maduro stole his second-term election win last May. The former union leader cruised to victory after blocking the main opposition candidates from running. Turnout was low.

Turkish President Tayyip Erdogan voiced his support for Maduro in a phone call on Thursday.