Far-left and far-right groups clash in Portland: Four injured and 13 arrested as tensions flare between protesters on streets lined with more than 1,000 cops just hours after President Trump threatened to declare Antifa a ‘terror organization’

Authorities closed bridges and streets to try to keep the rival groups apart. The city’s mayor said the situation was ‘potentially dangerous and volatile,’ and President Donald Trump tweeted ‘Portland is being watched very closely.’

As of early afternoon, most of the right-wing groups had left the area via a downtown bridge. Police used officers on bikes and in riot gear to keep black-clad, helmet- and mask-wearing anti-fascist protesters – known as antifa – from following them. 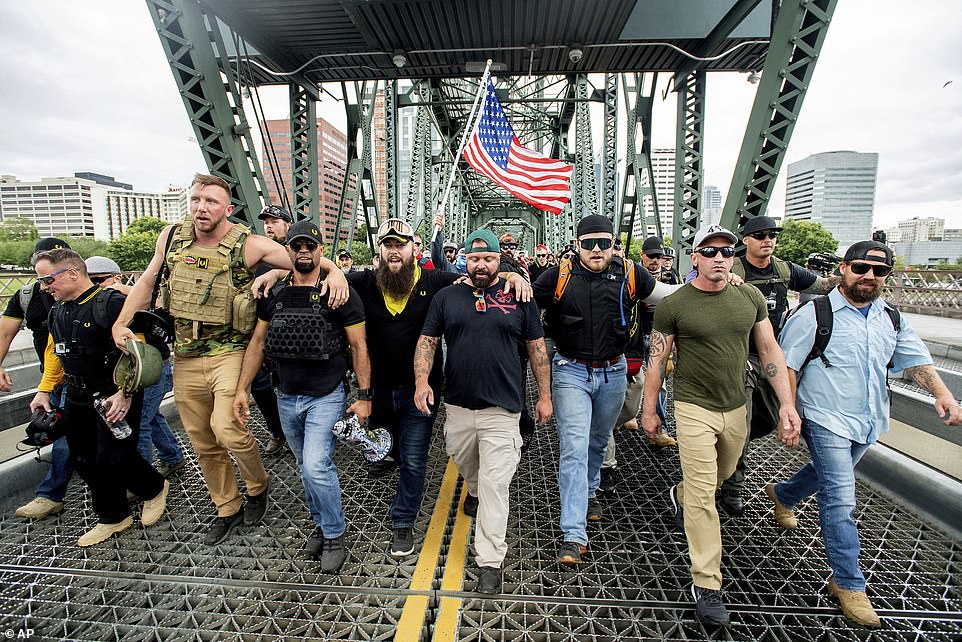 Members of the Proud Boys and other right-wing demonstrators march across the Hawthorne Bridge during an ‘End Domestic Terrorism’ rally in Portland, Oregon on Saturday. The group includes organizer Joe Biggs, center in green hat, and Proud Boys Chairman Enrique Tarrio, holding megaphone 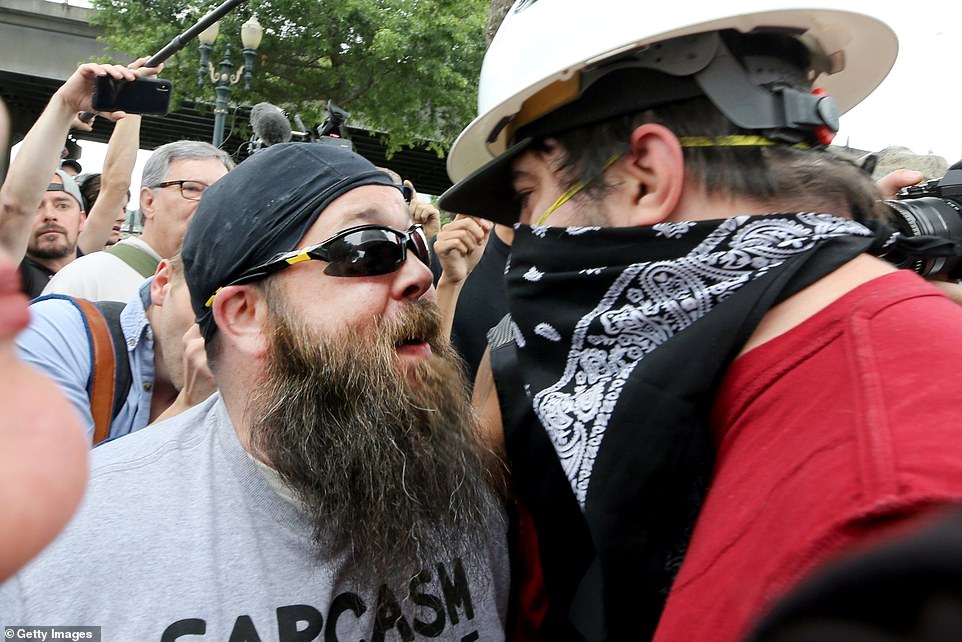 A right-wing demonstrator (left) and masked Antifa counter-protester face off in the street in Portland on Saturday. Authorities fear violence during the demonstrations 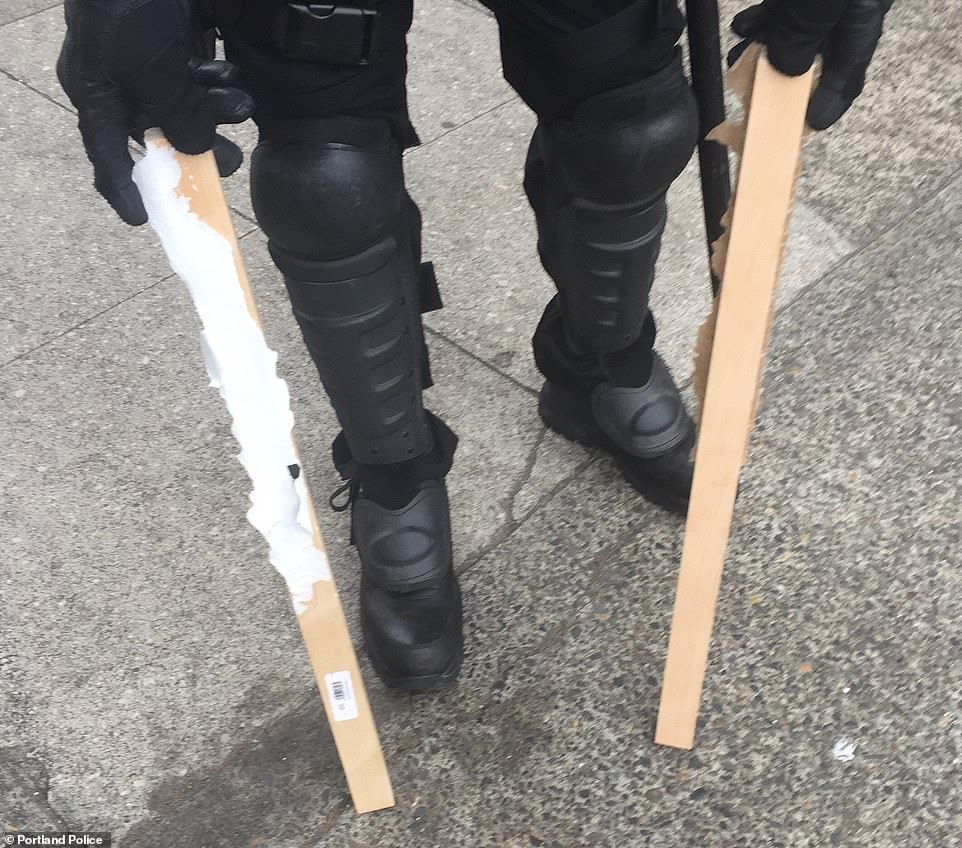 Police show wooden sticks, which may have been affixed to signs, but were confiscated as potentially dangerous weapons in an attempt to avoid violence 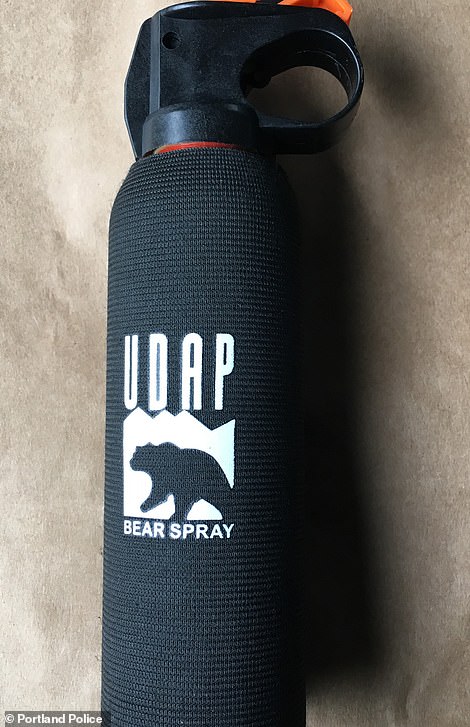 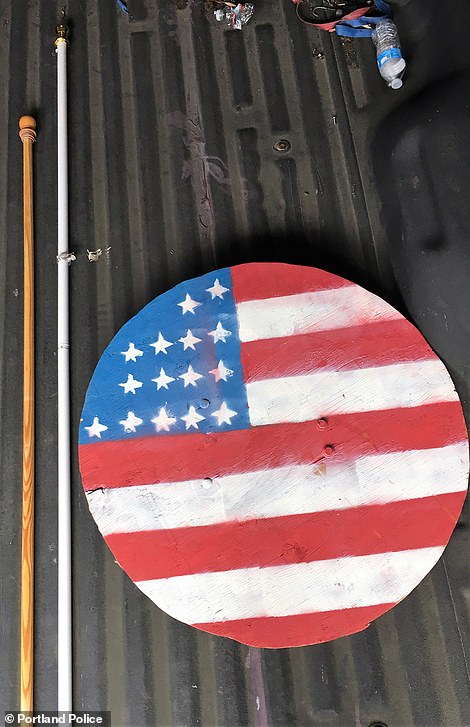 But hundreds of people remained downtown and on nearby streets, and there were skirmishes throughout the day. Police declared a gathering of mostly left-wing protesters near Pioneer Courthouse Square a ‘civil disturbance’ and told people to leave.

One person was injured and transported via ambulance, and three other people were evaluated by medics, Portland Police spokeswoman Lt. Tina Jones said. The injuries were minor, she said.

Jones said at one point there were about 1,200 on the streets, but that number had fallen to about 400 late in the afternoon.

The events began late in the morning. Flag-waving members of the Proud Boys, Three Percenters militia group and others gathered downtown, some also wearing body armor and helmets. Police said they had seized the weapons, including shields, from multiple groups as they assembled along the Willamette River, which runs through the city.

More than two dozen local, state and federal law enforcement agencies, including the FBI, were in the city for the right-wing rally that was expected to draw people from across the country. Portland Police said all of the city’s 1,000 officers would be on duty for the gathering that was hyped on social media and elsewhere for weeks.

In the days leading up to the event, Portland Mayor Ted Wheeler said people who espoused hate or engaged in violence were ‘not welcome.’

In a Saturday morning tweet, President Donald Trump wrote ‘Portland is being watched very closely.’ He also wrote that ‘major consideration is being given to naming ANTIFA an ‘ORGANIZATION of TERROR.”

But it wasn’t immediately clear what he meant by that as there’s no mechanism for the United States government to declare a domestic organization a terror group. The State Department maintains a list of designated foreign terrorist organizations, such as al Qaeda, but there’s no comparable designation or list for American groups. 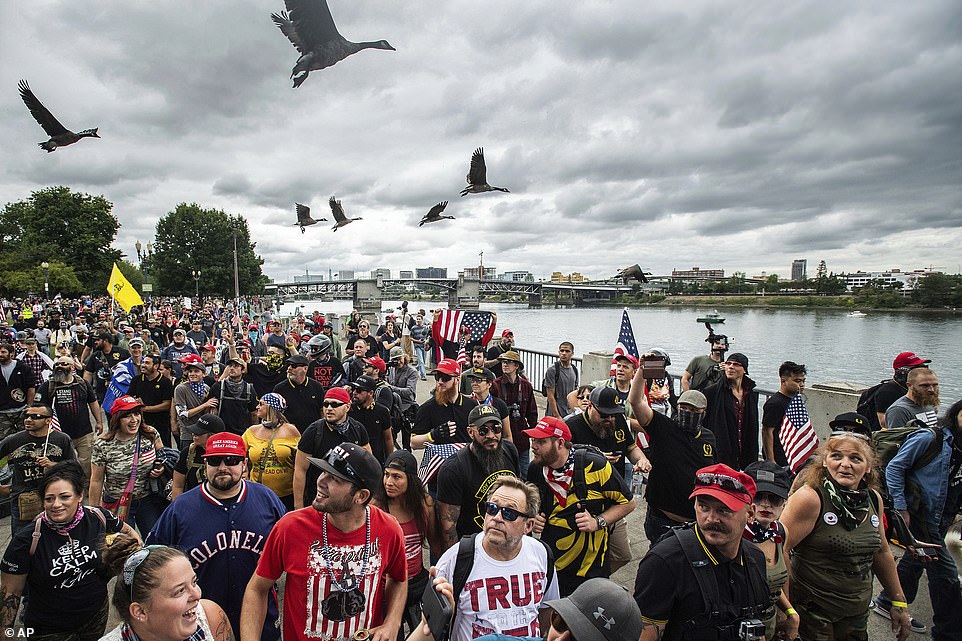 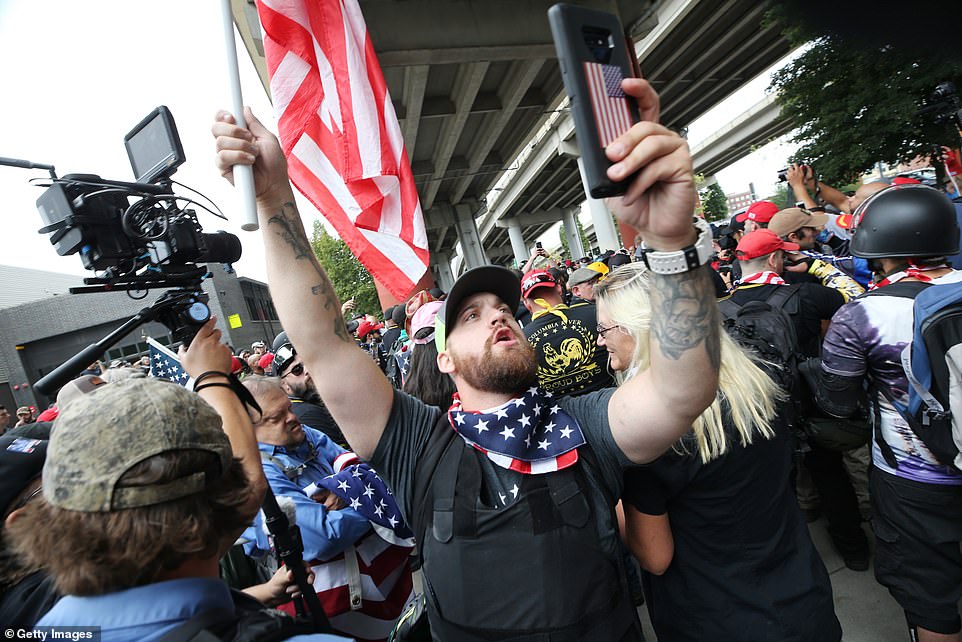 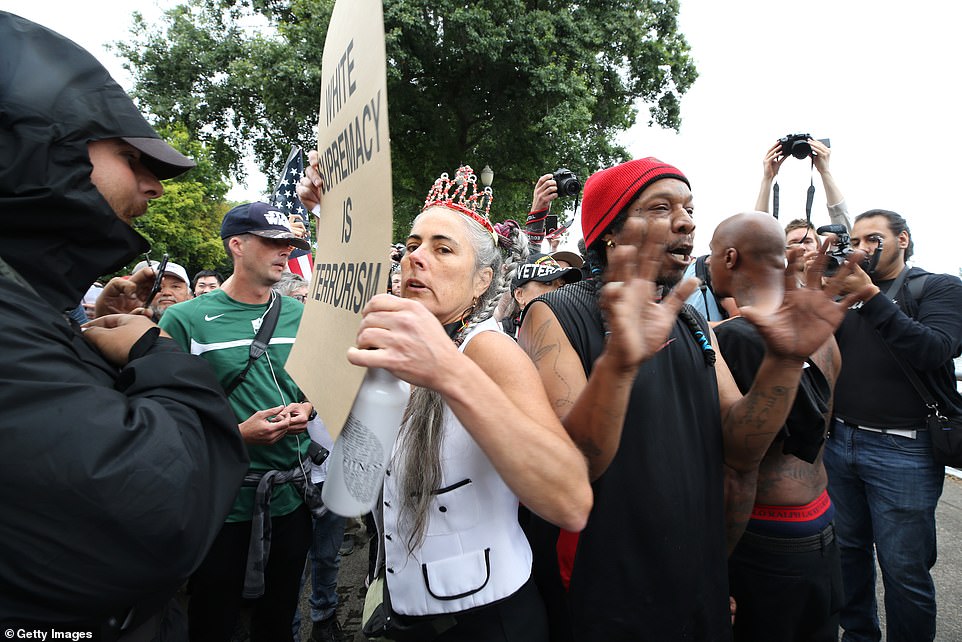 Not all who gathered late Saturday were with right-wing groups or antifa. Also on hand were people who attended a nearby prayer service, holding signs that said things like ‘No Trump, No NRA.’ 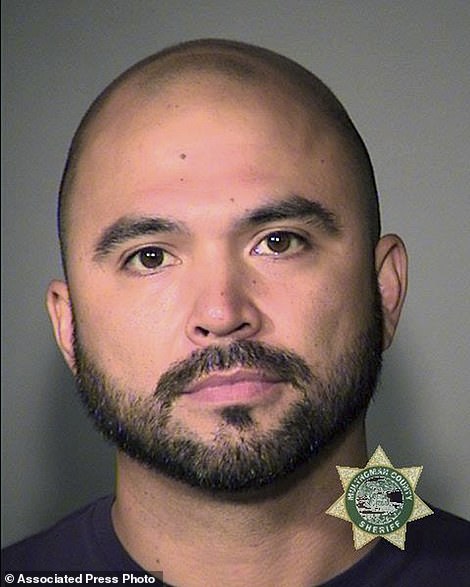 Self-described anti-fascists – known as antifa – had vowed to confront the rally while leaders from the far right urged their followers to turn out in large numbers to protest the arrests of six members of right-wing groups in the run-up to the event.

Patriot Prayer’s Joey Gibson, who is not involved in this weekend’s event but organized similar rallies in 2017 and 2018 that erupted in clashes, surrendered Friday on an arrest warrant for felony rioting. He was at a confrontation that broke out on May 1 outside a bar where antifa members had gathered after a May Day demonstration.

In a video he livestreamed on Facebook, Gibson accused the police of playing politics by arresting him but not the masked demonstrators who beat up conservative blogger Andy Ngo at a June 29 rally that drew national attention to this liberal city.

A video of that attack went viral and led the Proud Boys, who have been designated a hate group by the Southern Poverty Law Center, to organize Saturday’s event.

‘What I’m saying to everybody who’s listening to this (is) they’re trying to shut you guys up. They want you to not show up in Portland, they want to put fear in your hearts,’ Gibson said. 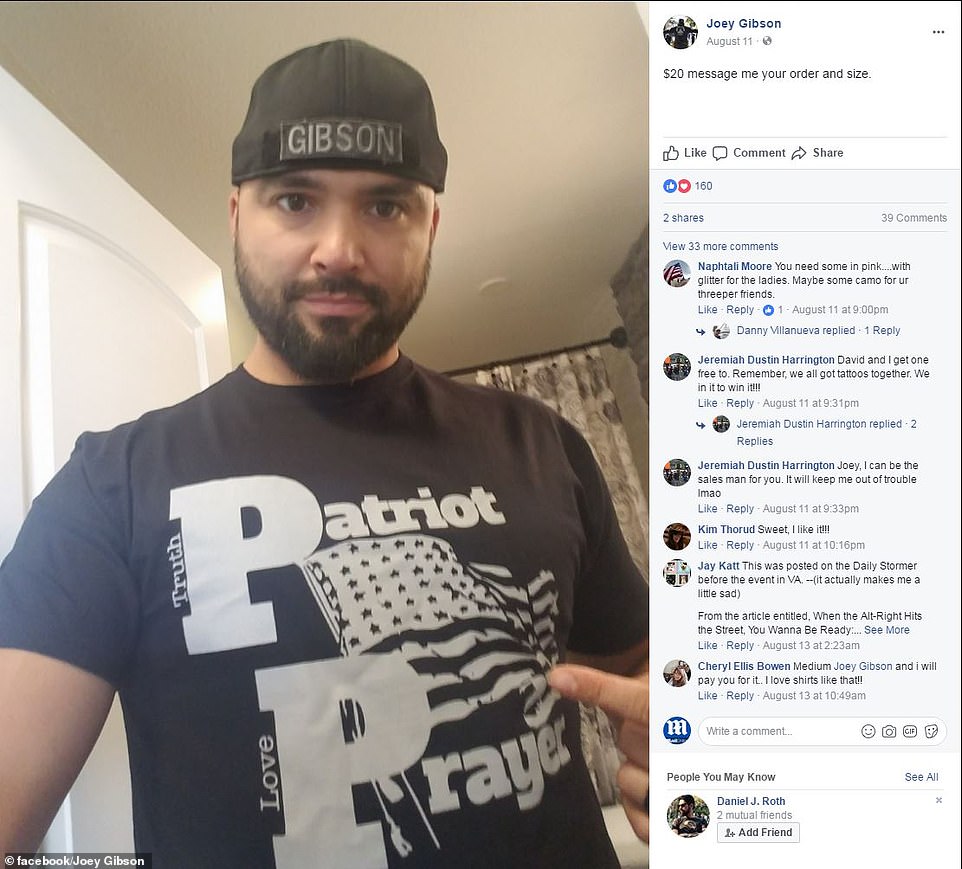 ‘We show up ten-fold, one hundred-fold,’ he said. ‘If you believe in freedom and you’re against this political charging that they’re doing, show up tomorrow but be peaceful. Force them to arrest you for being peaceful.’

Portland Police Bureau spokeswoman Tina Jones declined to comment about specific arrests but said generally police continue to investigate several incidents from clashes on May 1 and June 29 and are politically neutral.

Antifa members often cover their faces with masks, making it harder to identify them.

‘We receive criticism no matter what. It’s either too much, not enough, you arrested this group and not this group,’ Jones said. ‘One hundred percent, it’s about public safety.’ 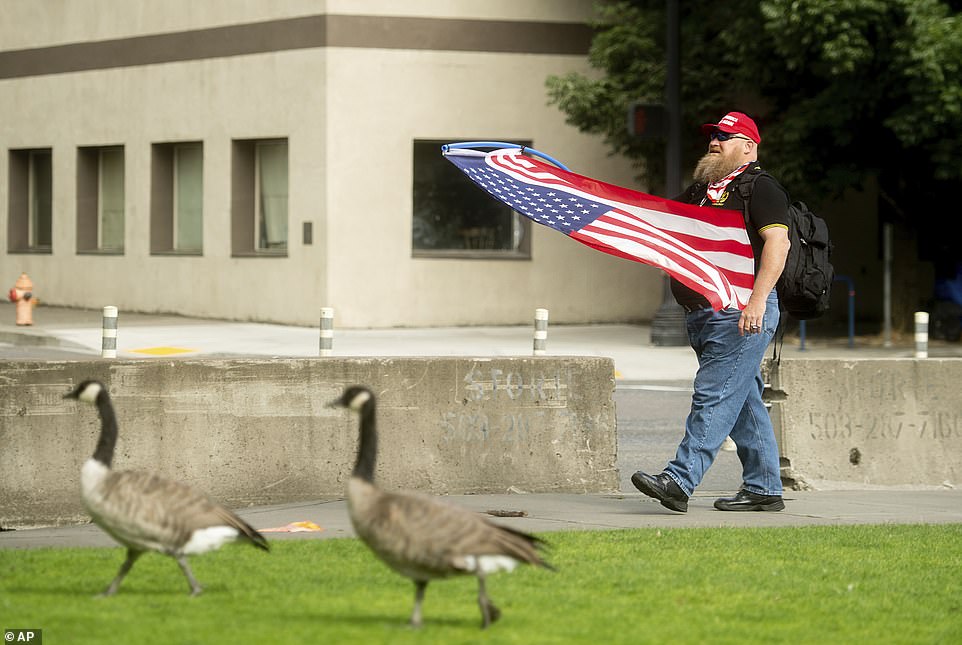 A member of the Proud Boys, who declined to give his name, carries a flag before the start of a protest in Portland 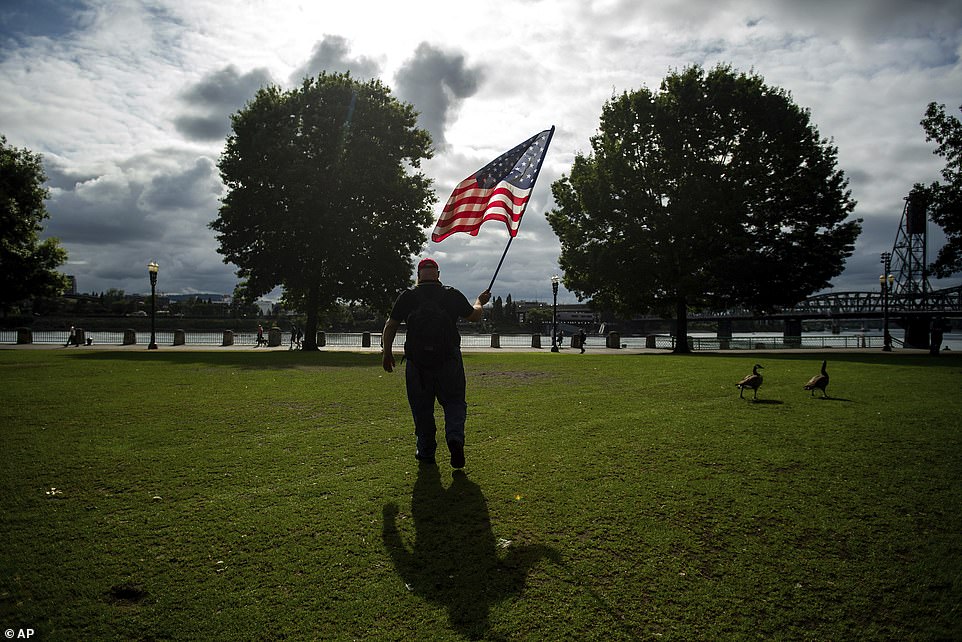 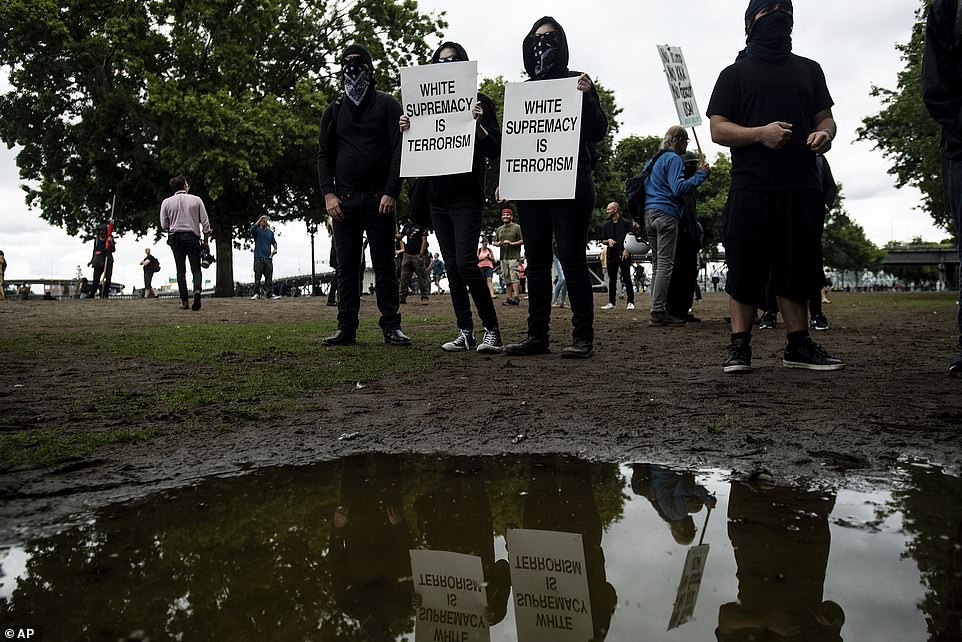 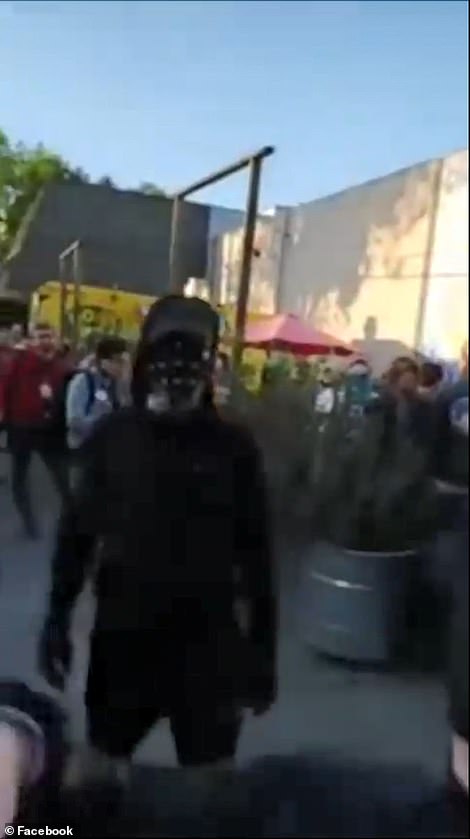 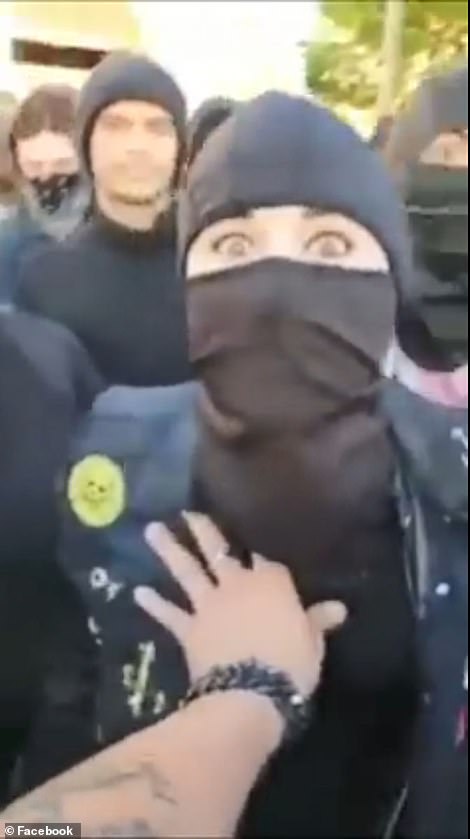 Members of antifa often cover their faces with masks, making it harder to identify them

In addition to the Proud Boys and Three Percenters, the white nationalist American Guard also said it would have members in Portland.

The Oath Keepers, another far-right militia group, said in a statement they were pulling out of the rally because organizers have not done enough to keep white supremacist groups away.

‘It would be best for the patriot/conservative cause if this August 17 rally were simply canceled,’ the group’s founder, Stewart Rhodes, wrote.

Authorities asked residents not to call 911 unless it’s a life-threatening emergency and to stay away from the heart of downtown.