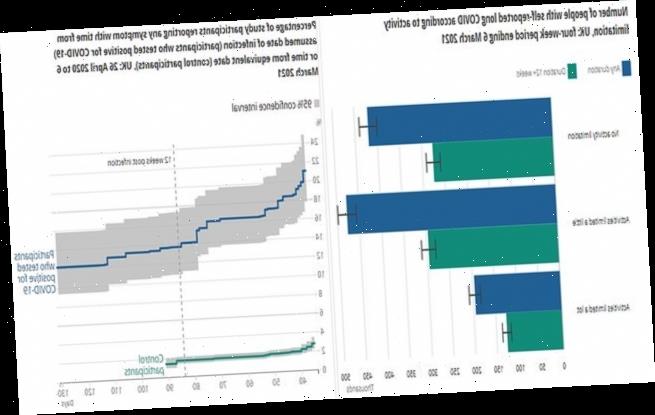 Around 1.1MILLION Britons have ‘long Covid’ and 70,000 claim they have suffered crippling fatigue for over a year, ONS figures show

Around 1.1million Brits claim to have suffered ‘long Covid’ since the pandemic began, according to the largest study of its kind.

And 70,000 people say they have battled fatigue and other crippling symptoms for a over a year.

Middle-aged women who worked in healthcare, lived in deprived areas and had pre-existing conditions were most likely to suffer lingering symptoms.

The Office for National Statistics quizzed thousands of adults who were diagnosed with the virus, or believe they had it, between last April and March 6.

Answers were used to estimate how many of the 66million Britons may be suffering from the condition.

But their figures relied on ‘self-reporting’, with participants not being asked to offer any proof they were still suffering from crippling after-effects of the disease.

Statisticians added increased awareness of the ailment may have led to more people claiming they were battling against difficult symptoms.

But MPs insisted the figures revealed the ‘devastating impact’ of Covid and the ‘urgent need’ to offer more support to sufferers. 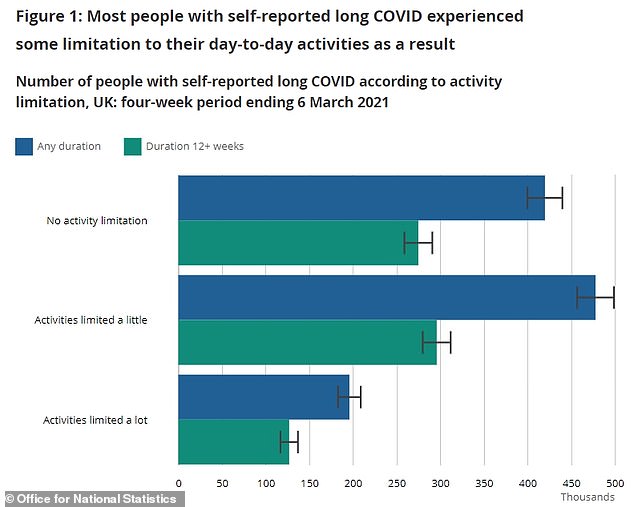 Office for National Statistics experts estimated almost 300,000 Britons were suffering some limitation to their daily activity more than 12 weeks after fighting off the virus 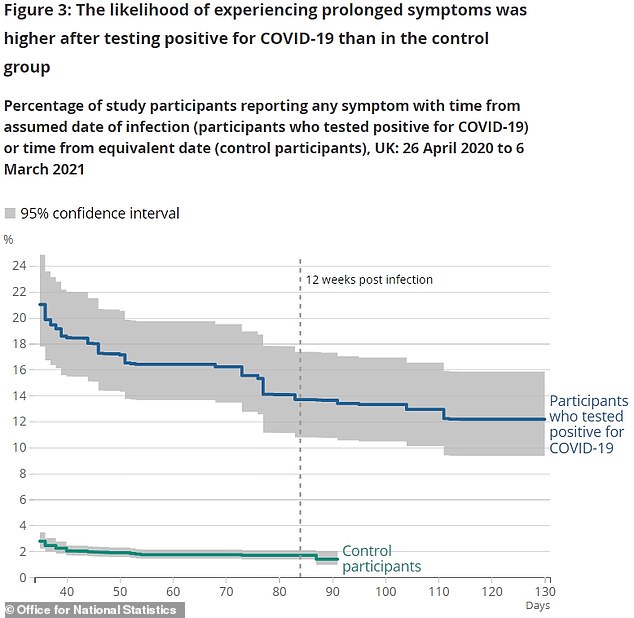 The statisticians found 13.7 per cent of participants in their study were still suffering some impacts from Covid 12 weeks after catching the virus 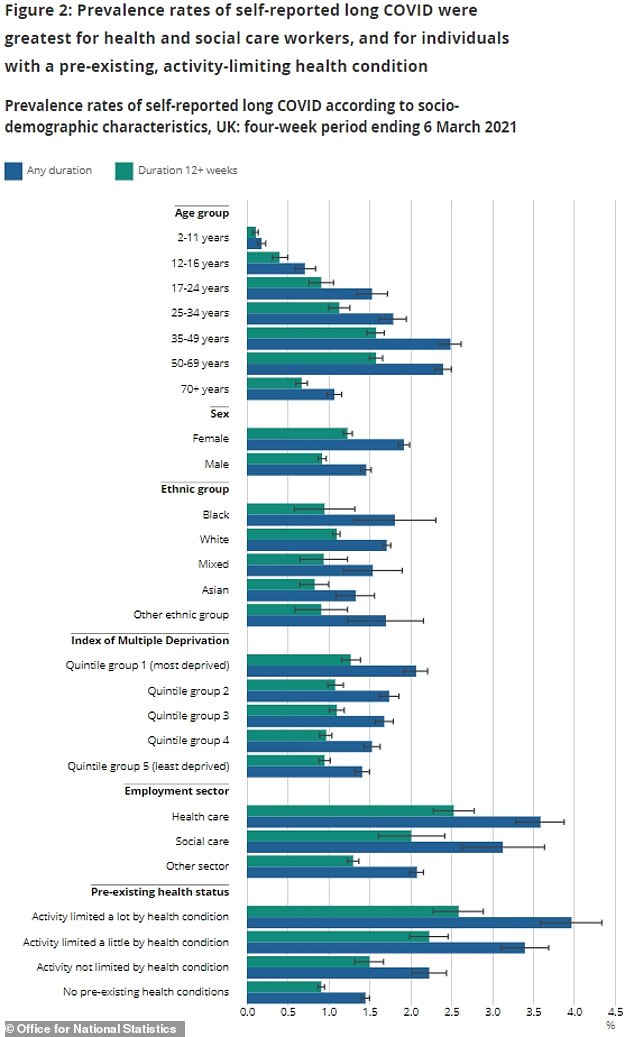 Long Covid was most likely to strike middle-aged women who lived in deprived areas and worked in healthcare, they said based on their results

WHAT ARE THE LONG-TERM SYMPTOMS OF COVID-19?

Most coronavirus patients will recover within a fortnight, suffering a fever, cough and losing their sense of smell or taste for several days.

However, evidence is beginning to show that the tell-tale symptoms of the virus can persist for weeks on end in ‘long haulers’ — the term for patients plagued by lasting complications.

Data from the COVID Symptom Study app, by King’s College London and health company Zoe, suggests one in ten people may still have symptoms after three weeks, and some may suffer for months.

For those with more severe disease, Italian researchers who tracked 143 people who had been hospitalised with the disease found almost 90 per cent still had symptoms including fatigue two months after first falling unwell.

The most common complaints were fatigue, a shortness of breath and joint pain – all of which were reported during their battle with the illness.

Long Covid was defined as symptoms persisting more than four weeks after the first suspected Covid episode that are not explained by something else.

Around 674,000 Britons had suffered some ‘adverse affect’ on their daily activities after catching the virus, while 196,000 said it had limited them ‘a lot’.

The data also suggested almost 300,000 Britons were still facing limits on their lives due to long Covid 12 weeks after being infected, while 130,000 were still battling against debilitating symptoms after three months.

A separate arm of the study included 20,000 people who had tested positive for the virus, matched to 20,000 others who were not thought to have caught the virus to allow for comparison.

Some 13.7 per cent (almost 3,000) of the virus-suffering group were still suffering symptoms 12 weeks after they tested positive, results showed.

Long Covid was most likely to last for three months among people who were aged between 35 and 69 years. It was also more likely among females (1.23 per cent) compared to males (0.92 per cent).

Those who tested positive were around eight times more likely to face long Covid than those that hadn’t been diagnosed with the virus.

ONS statisticians added self-reporting of symptoms meant their results could contain errors, as some people are more likely to complain of ongoing symptoms compared to others.

They added increased awareness of long Covid may have led to more people reporting symptoms than when the pandemic began.

There is no officially approved definition of long Covid, with the condition instead diagnosed through detecting a multitude of symptoms that persist after someone has fought off the virus.

Layla Moran, the chair of the All Party Parliamentary Group (APPG) on Covid, said: ‘These figures reveal the devastating impact of long Covid across the country and the urgent need for the government to step up support for those affected.

‘For too long Covid patients have felt like the forgotten victims of this pandemic. The government must end the current postcode lottery of rehabilitation services and ensure all those who need long-term treatment can access it.

‘We also need a compensation scheme for key workers with long Covid, who have worked tirelessly on the frontline against the pandemic and are now paying a heavy price.

‘The government must recognise long Covid as an occupational disease and provide formal guidance to employers, to ensure that workers suffering symptoms are treated fairly and given proper support.’

It comes after a separate study from Leicester University found seven in 10 patients hospitalised by Covid still suffered debilitating symptoms five months after they were discharged.

The research published last week laid bare the toll of the condition on survivors that were plagued by symptoms including breathlessness, fatigue and muscle pain.

Leicester experts, who quizzed 1,077 long-haulers, also found two in five had reduced their workload or were off sick because of their persistent symptoms.

Health Secretary Matt Hancock said last week he was ‘determined’ to improve care for Britons suffering the ‘lasting and debilitating’ impacts of Covid.

Estimates suggest long Covid strikes up to one in ten infected people, leaving them battling fatigue and brain fog for months.

NHS England has put aside more than £20million to treat the condition and set up a network of 72 sites across the nation to assist patients complaining of symptoms.