Yerevan: Armenia's military said its rockets shot down an Azerbaijani drone near the capital on Thursday night, local time, as heavy fighting persisted in the conflict over the separatist region of Nagorno-Karabakh.

This week's fighting is the biggest escalation in years in the decades-long dispute over the region, which is inside Azerbaijan but controlled by local ethnic Armenian forces backed by Armenia. 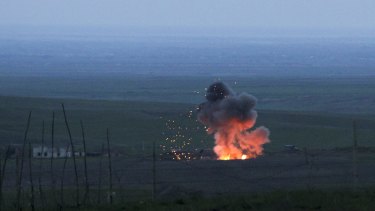 An explosion of a downed Azerbaijani drone in the separatist region of Nagorno-Karabakh, Azerbaijan in 2016. Credit:AP

Two French and two Armenian journalists were injured on Thursday in the fighting.

Late on Thursday, Armenia fired anti-aircraft missiles that took down a drone over the town of Abovian, about 16 kilometers north of the capital of Yerevan, said defence ministry spokeswoman Shushan Stepanian. No casualties were reported.

Azerbaijani forces reportedly have shelled other Armenian villages outside Nagorno-Karabakh, but not as deeply into the country as Yerevan.

Two Le Monde reporters were wounded in morning shelling in the town of Martuni, the newspaper said. Armenia’s Foreign Ministry said they were being taken to a hospital and accused Azerbaijan of bombarding the region.

A cameraman with the Armenia TV channel and a reporter with the Armenian 24News outlet also were injured in the Martuni shelling, Armenian officials said. It was unclear how badly the four journalists were hurt. A Russian journalist with the independent Dozhd TV channel was reported to have reached a bomb shelter safely.

The clashes broke out Sunday in Nagorno-Karabakh, a region within Azerbaijan that has been controlled by Armenian forces since the end of a separatist war a quarter-century ago. Fighting has continued unchecked since then, killing dozens and leaving scores wounded. Armenian and Azerbaijani forces blame each other for continuing attacks.

The two ex-Soviet nations have been locked for decades in a conflict over Nagorno-Karabakh, where a separatist war was fought in the early 1990s, ending in 1994 — three years after the breakup of the Soviet Union. The 4400-square-kilometre enclave in the Caucasus Mountains, roughly the size of the US state of Delaware, lies 50 kilometre from the Armenian border.

Soldiers backed by Armenia occupy the region as well as some Azerbaijani territory outside of it. 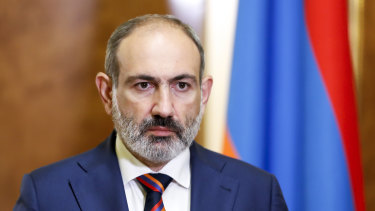 The president of Azerbaijan said Armenia’s withdrawal from Nagorno-Karabakh was the sole condition to end the fighting. Armenian officials claim Turkey is involved in the conflict, allegedly sending fighters from Syria to the region and deploying Turkish F-16 fighter jets to assist Azerbaijnai forces.

Turkey has publicly supported Azerbaijan in the conflict and said it would provide assistance if requested but denies sending in foreign mercenaries or arms.

The Armenian Foreign Ministry on Thursday said a civilian was killed and two were wounded when Azerbaijan fired on the town of Shatvan in Armenian territory.

Continued fighting in the turbulent region prompted calls for a cease-fire from around the globe and raised concerns of a broader conflict potentially involving other regional powers.

The office of French President Emmanuel Macron said in a statement that he and Russian President Vladimir Putin discussed the issue in a phone call Wednesday night and both “share concern about the sending of Syrian mercenaries by Turkey to Nagorno-Karabakh." Macron's office did not elaborate.

Macron later told reporters in Brussels that “we have information today that we're confident in” that Syrian fighters have been deployed to Azerbaijan. “It's a very serious new development that also changes the balance of things,” he said.

The Russian Foreign Ministry on Wednesday expressed concern over reports about “militants from illegal armed groups" from Syria and Libya being sent to the conflict zone in Nagorno-Karabakh. It didn’t provide further details, but in a statement urged the “leadership of the states concerned to take effective measures to prevent the use of foreign terrorists and mercenaries in the conflict.”

Macron said he and Putin urged restraint and agreed upon the need for a joint effort toward a cease-fire, as part of international mediation efforts for Nagorno-Karabakh led by Russia, France and the U.S.

Kremlin spokesman Dmitry Peskov refused to comment on Turkey's alleged involvement in the conflict, but said that “any statements about military support for one of the (opposing) sides” can provoke further escalation of tensions in the region.

“We believe that any participation of third countries in this confrontation can also have extremely negative consequences," Peskov said.