ARIANA Grande's mum today paid tribute to the victims of the Manchester Arena Bombing on the second anniversary of the terrorist attack.

Joan Grande, 50, shared a message of love and solidarity online as Coronation Street also commemorated the 22 people who tragically lost their lives in 2017. 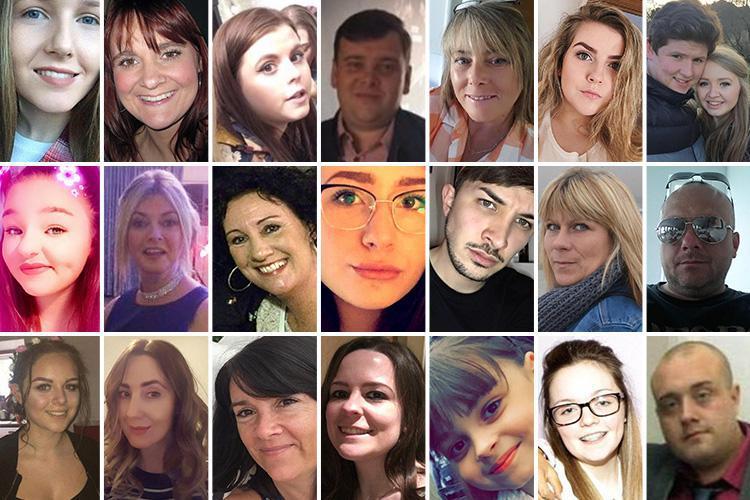 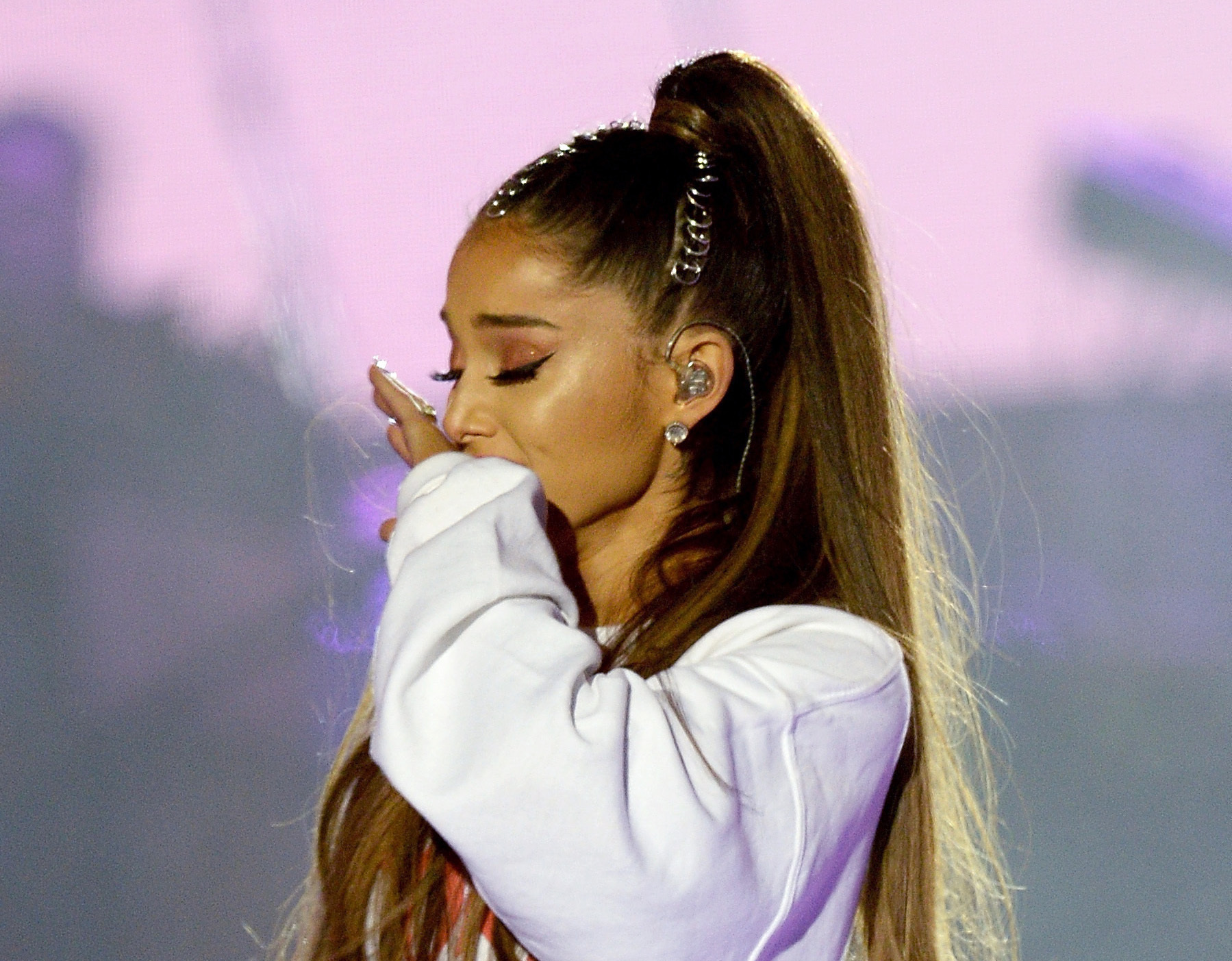 Ariana herself shared a bee emoji on her Instagram story this morning — the worker bee being a symbol of Manchester and its industrial past.

The suicide bombing took place two years ago on May 22 as fans filtered through the foyer of the Manchester Arena after Ariana's concert.

As well as those killed, 139 people were injured by the blast — more than half of them children.

Today, moving tributes to those affected by Britain's deadliest terror attack since the 7/7 London bombings were widely shared online.

Joan Grande tweeted: "All my love Manchester, today and every day.

"You are with my always, in my heart and in my mind.

"To ALL of you who have suffered and still suffer from tremendous loss, trauma or devastating injury…

"I love you, I send you a warm hug, today and forever. #OneLove"

The hashtag referenced the name of the benefit concert held in Manchester two weeks after the bombing which Ariana Grande organised to raise money for the attack's victims and their families.

Coronation Street also tweeted via its official account to say: "Remembering two years ago today and all those affected."

The tweet included a picture of a memorial bench installed on the Corrie set which pays tribute to Martyn Hett, who was a massive fan of the soap, and others who were killed in the bombing.

Manchester City wrote: "This City Remembers", and Manchester United tweeted: "Manchester together: then, now and forever".

And the Manchester Evening News, the city's local newspaper, added: "To pretend the city's wounds will ever fully heal would be to misunderstand grief.

"The memory of those who died is becoming woven into Manchester's fabric, into its consciousness and its physical landscape."

They shared a message on a screen while on stage which said: "Blinks, thank you for being with us tonight.

"It's a privilege to be performing here in Manchester, especially at this time.

"We send out love and prayers to the friends and families who fought through the hard times. We are here for you." 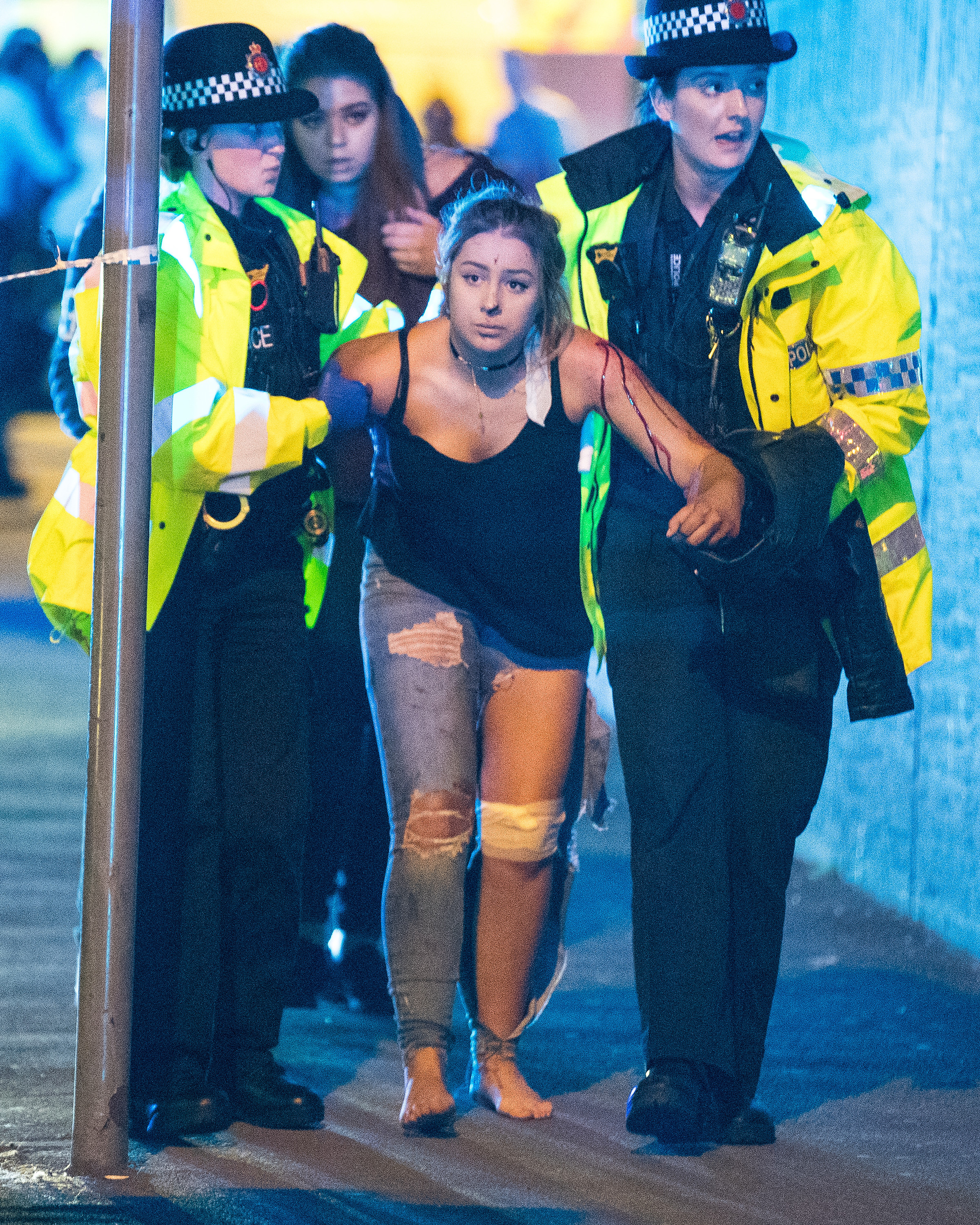 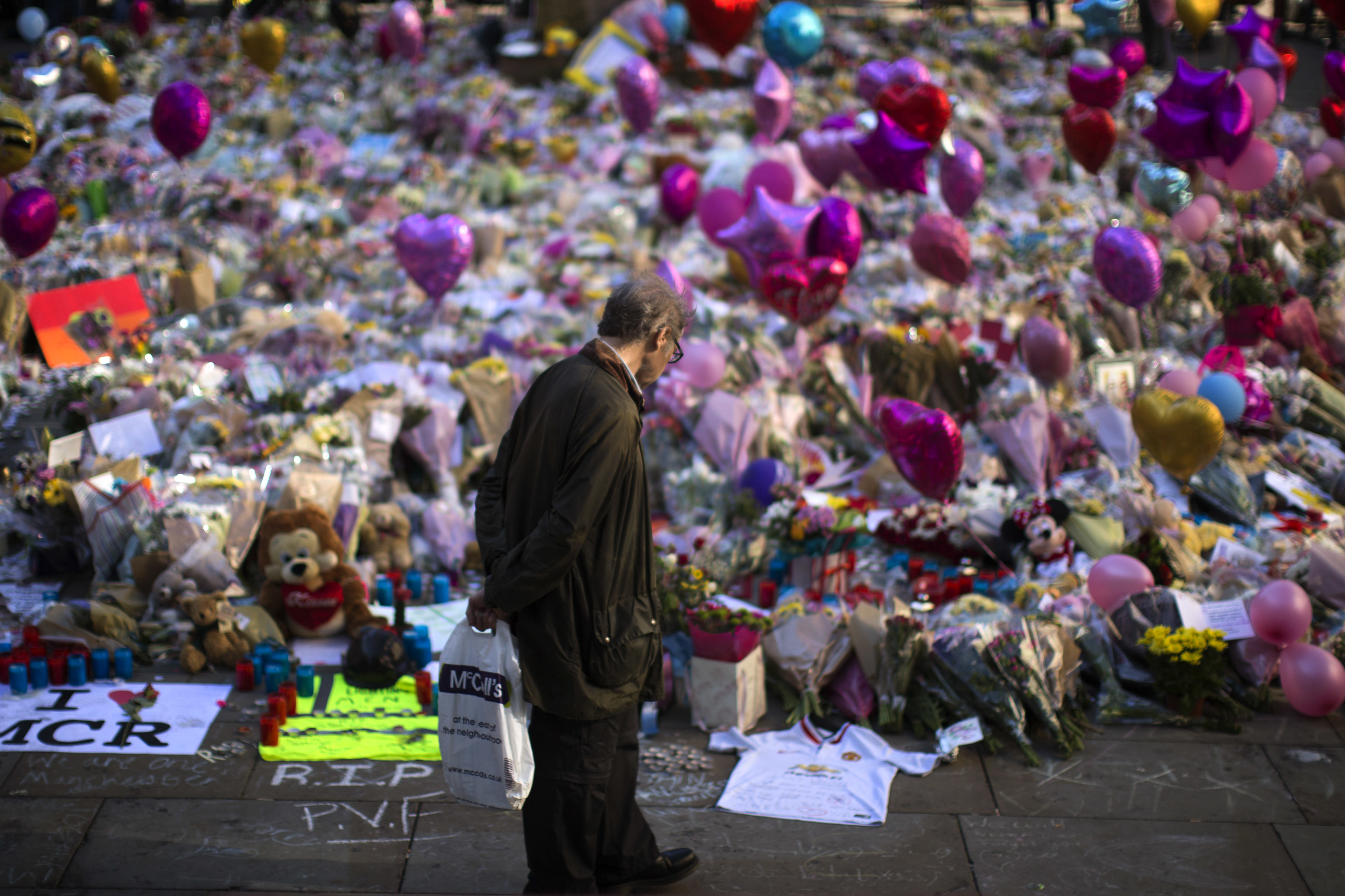 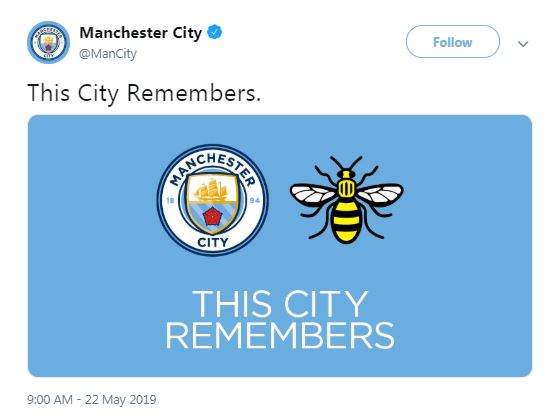 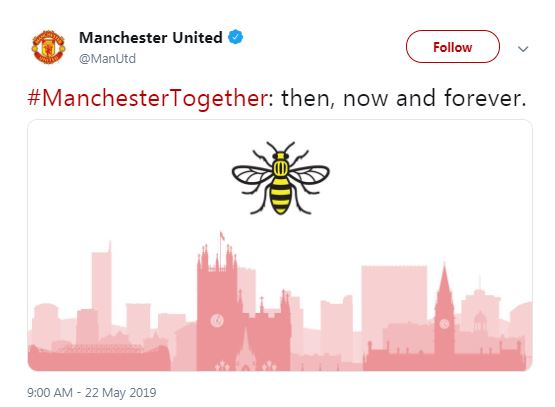 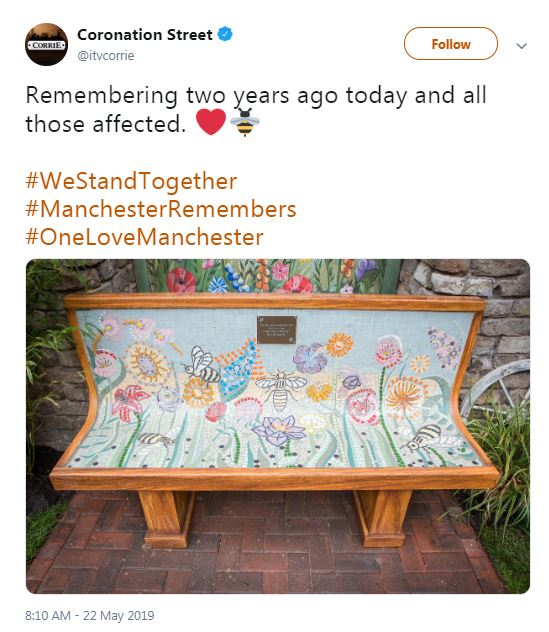 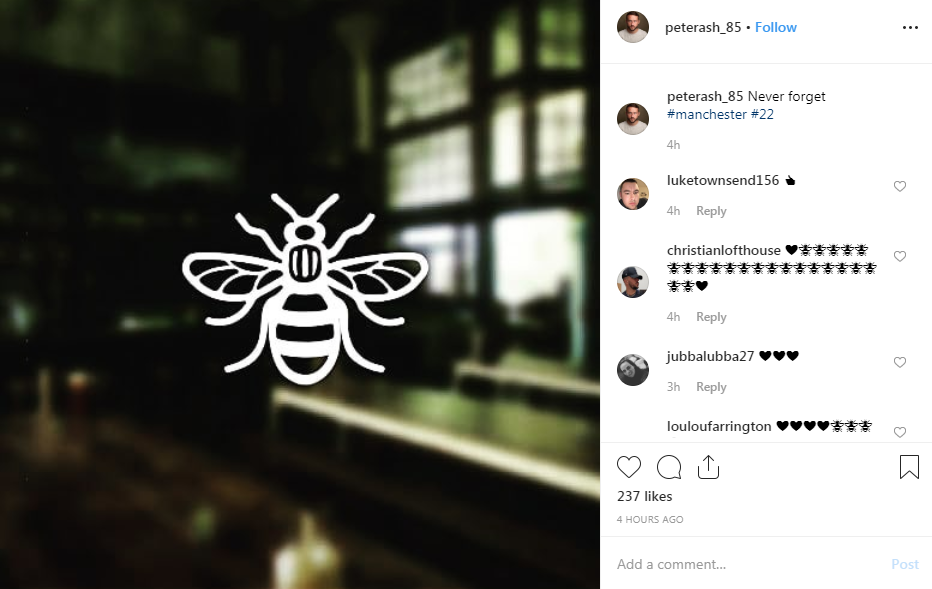 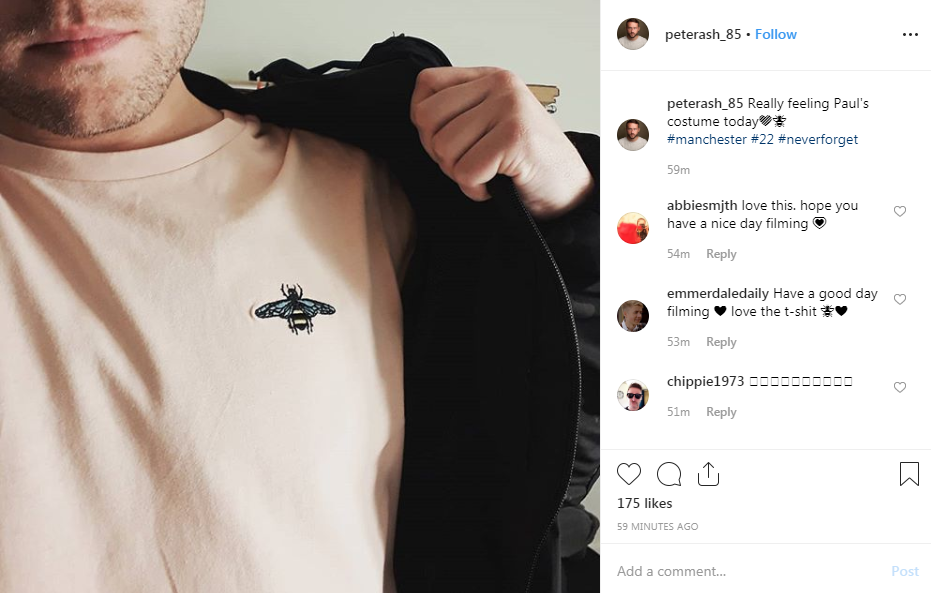 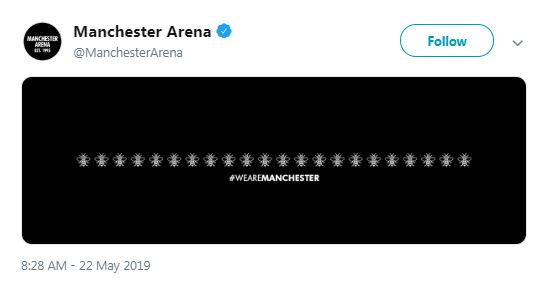