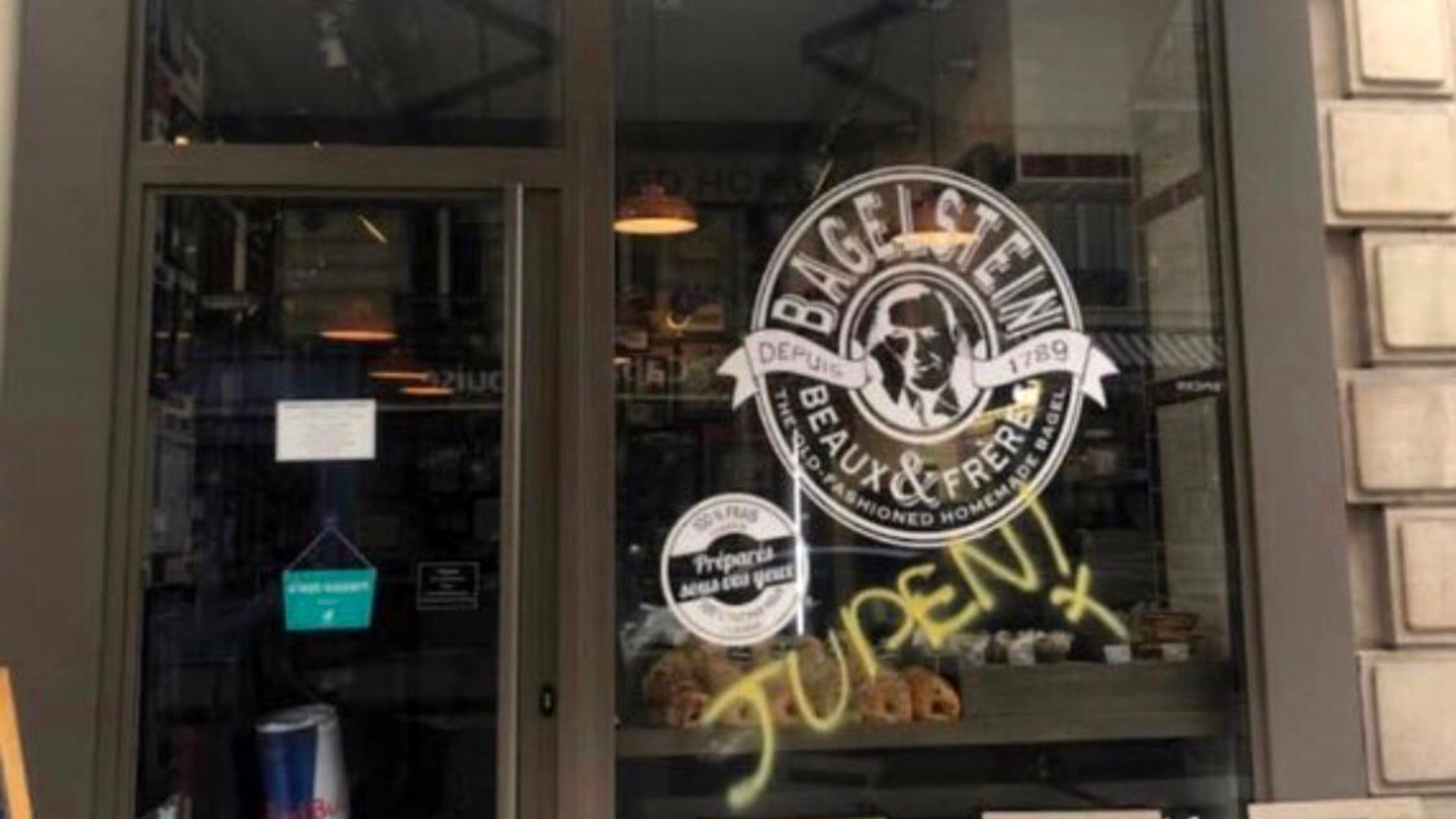 Anti-Semitic graffiti was discovered on a bagel shop in Paris on Saturday, as police forces and anti-government protesters clashed in other parts of the city.
(Benjamin Griveaux/Twitter)

Authorities in Paris have launched an investigation after anti-Semitic graffiti was found Saturday sprayed across a bagel shop in the city's old Jewish quarter.

The word "Juden," which is German for Jews, was discovered on the glass window of a Bagelstein chain as anti-government protesters and police forces clashed in other parts of the French capital.

"The most filthy anti-Semitism in the streets of the city of light," government spokesman Benjamin Griveaux said on Twitter.

The French League Against Racism and Anti-Semitism showed a photograph of the bagel shop graffiti alongside a photo of a Berlin shop in 1938 Germany that was marked in a similar way.

The Representative Council of Jewish Institutions in France, or CRIF, expressed "indignation and anger" after the discovery. The group added it was an "act that recalls the darkest hours of history."

The anti-Semitic vandalism was discovered after a French yellow vest protester's hand was ripped apart during violent clashes in Paris as demonstrators tried to storm the French National Assembly in a 13th consecutive week of unrest. 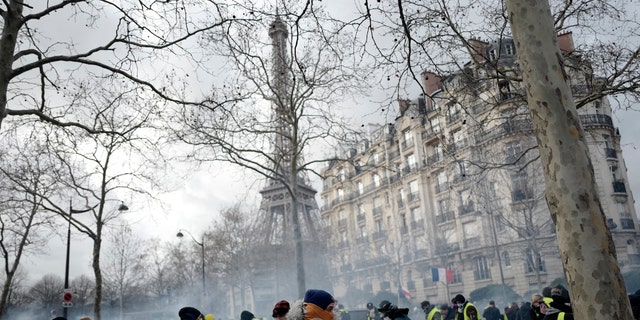 Yellow vest protesters run away from tear gas fired by riot police as they keep pressure on French President Emmanuel Macron’s government, for the 13th straight weekend of demonstrations, during a demonstration in Paris, France, Saturday, Feb. 9, 2019.
(AP Photo/Kamil Zihnioglu)

Police said the injured protester lost four fingers as police swooped in to stop protesters from breaching parliament's exterior. While some have questioned if there was a connection between the protestors and graffiti, restaurant owners believe the incident took place hours before the demonstrations began, according to The Local.

Last fall, French Prime Minister Edouard Philippe announced a 69 percent rise in the number of anti-Semitic acts reported to police in the first nine months of 2018 compared to the same period last year.

Despite years of government efforts to fight it, "we are very far from having finished with anti-Semitism," he wrote on Facebook. He expressed particular concern because overall, anti-Semitic acts have been on the decline in recent years.

Why the rise in anti-Semitism?

"Each attack against one of our compatriots because he or she is Jewish resonates like new broken glass," the prime minister said at the time, in reference to the mass crackdown on Jews throughout Germany and Austria on Nov. 9, 1938 known as the Night of Broken Glass, or Kristallnacht. "It is up to each French person to mobilize 'for' something: for life together, for France's identity, for the values of the Republic."

Overall in 2017, the government reported 311 anti-Semitic acts, from threats to swastikas on Jewish gravesites to physical attacks on people wearing kippas. That was down from 335 the year before, but the number of violent anti-Semitic acts rose, along with anti-Muslim and other violent hate crimes.

The Interior Ministry said part of the recent rise could be attributed to a government push over the past year to encourage people to report hate crimes, including a new online portal to file police reports.