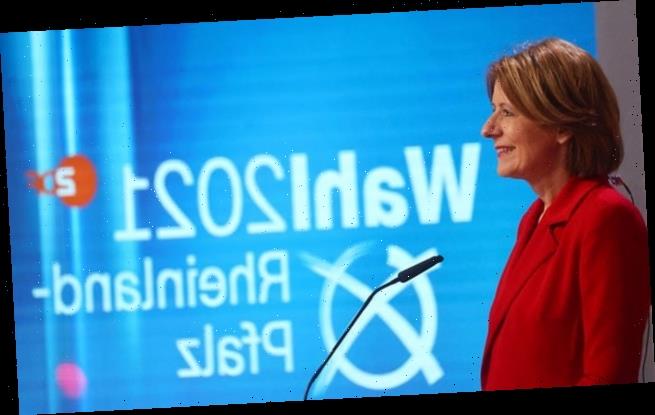 It comes as health experts have warned against easing lockdown measures in Germany due to the spread of the more infectious variant of Covid-19 first detected in Britain, with fears a third wave could be as bad as over Christmas.

Today’s vote took place six months before a national vote that will determine who succeeds the country’s longtime leader and amid rising dissatisfaction to the country’s sluggish vaccine rollout.

Sunday’s votes for new state legislatures in the southwestern states of Baden-Wuerttemberg and Rhineland-Palatinate kicked off an electoral marathon that culminates in the national election on September 26.

The national vote will determine who succeeds Merkel. 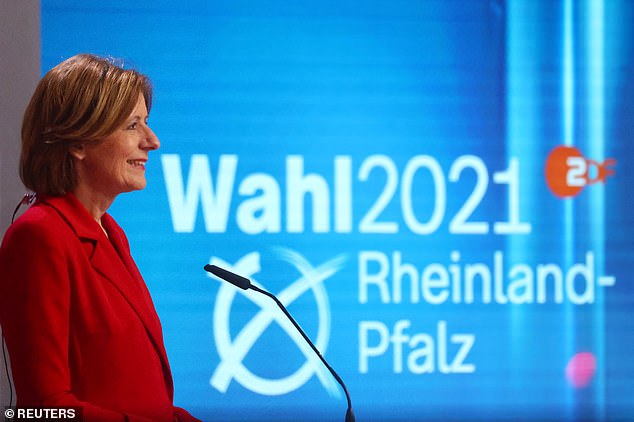 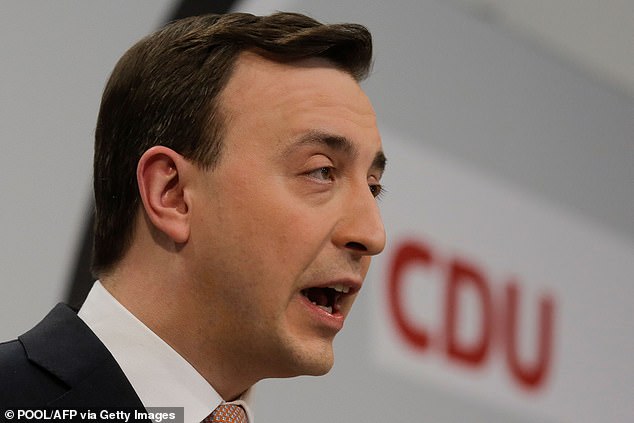 Paul Ziemiak, secretary general of Germany’s conservative Christian Democratic Union (CDU) party, speaks after exit poll results were published for state elections in Baden-Wuerttemberg and Rhineland-Palatinate, on March 14. Germans headed to the polls in two key regional elections, with German Chancellor Angela Merkel’s conservatives bracing for a drubbing on anger over a corruption scandal and a series of pandemic setbacks 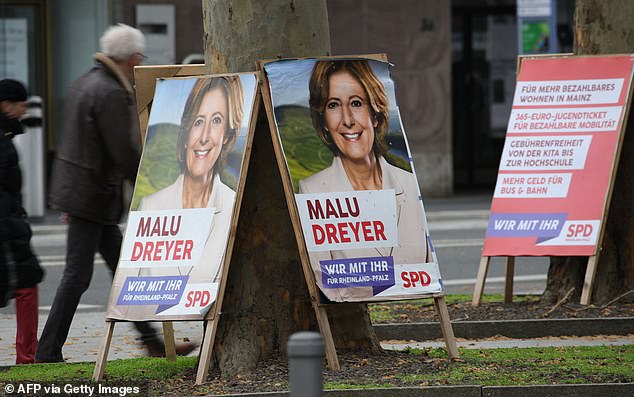 Election posters of Malu Dreyer, State Premier of the western federal state of Rhineland-Palatinate and top candidate of the social democratic SPD party, are pictured in Mainz, western Germany, during state elections on March 14

Amid discontent over a slow start to Germany’s vaccination drive, with coronavirus restrictions easing only gradually and infections rising again, Merkel’s Union bloc has been hit over the past two weeks by allegations that two lawmakers profited from deals to procure masks early in the coronavirus pandemic.

Projections for ARD and ZDF public television, based on exit polls and a partial count of votes, indicated that those governors’ parties – the environmentalist Greens in Baden-Wuerttemberg and the center-left Social Democrats in Rhineland-Palatinate – were set to finish first, 7 to 9 percentage points ahead of the CDU.

The CDU’s showings of about 23% and 26%, respectively, would be the party’s worst since World War II in both states.

‘To say it very clearly, this isn’t a good election evening for the CDU,’ said the party’s general secretary, Paul Ziemiak. ‘We would have liked different, better results.’ 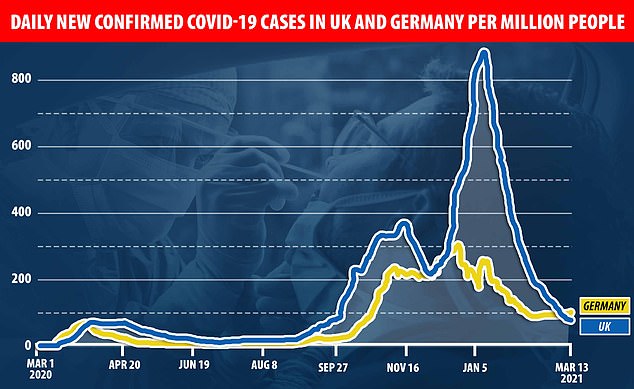 Wolfgang Schaeuble, the speaker of Germany’s parliament and a CDU heavyweight, argued that the governors’ personalities had been the decisive factor in the elections.

In Baden-Wuerttemberg, Germany’s only Green party governor, Winfried Kretschmann, has become popular with centrist voters in 10 years running a region that is home to automakers Daimler and Porsche.

The region was dominated by the CDU until Kretschmann won power shortly after Japan’s 2011 Fukushima reactor disaster, which accelerated the end of nuclear power in Germany.

Kretschmann, 72, a fatherly figure with a conservative image, featured on Green election posters with the slogan ‘You know me.’ That was a slogan Merkel famously once used in a pre-election debate to underline her own largely ideology-free appeal.

The Greens’ success bolstered their confidence for the national election campaign, in which the traditionally left-leaning environmentalist party is expected to make its first bid for the chancellery. Merkel isn’t seeking a fifth term after nearly 16 years in power.

The Greens’ national co-leader, Robert Habeck, described Sunday’s votes as ‘a super start to the super election year, and we will hopefully be able to take the tailwind from Baden-Wuerttemberg and Rhineland-Palatinate at full sail.’

Kretschmann has run Baden-Wuerttemberg since 2016 with the CDU as his junior partner, but may now be able to choose new allies.

The center-left Social Democrats have led Rhineland-Palatinate for 30 years – currently under governor Malu Dreyer, whose personal popularity has kept her party’s support above its dismal national ratings.

The Greens are a junior partner in her three-party governing coalition that also includes the pro-business Free Democrats, and looked set to improve somewhat on their showing five years ago. 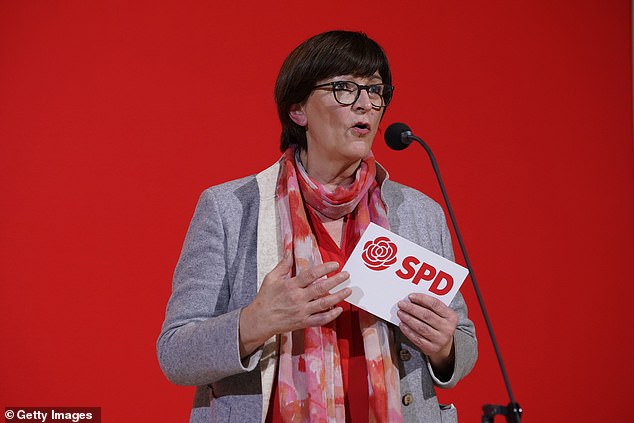 The far-right Alternative for Germany party appeared to have lost some support in both states, though still polled a bit over 10%.

It was an awkward moment for new CDU leader Armin Laschet to face his first major test since being elected in January, as the center-right considers who should run to replace Merkel as chancellor.

Many people had already voted by mail, so it’s unclear how far the scandal over lawmakers in the CDU and its Bavaria-only sister party, the Christian Social Union, allegedly enriching themselves through mask deals impacted Sunday’s vote.

Nikolas Loebel, a CDU lawmaker from Baden-Wuerttemberg, and the CSU’s Georg Nuesslein have both quit their parties and say they won’t run for parliament again. 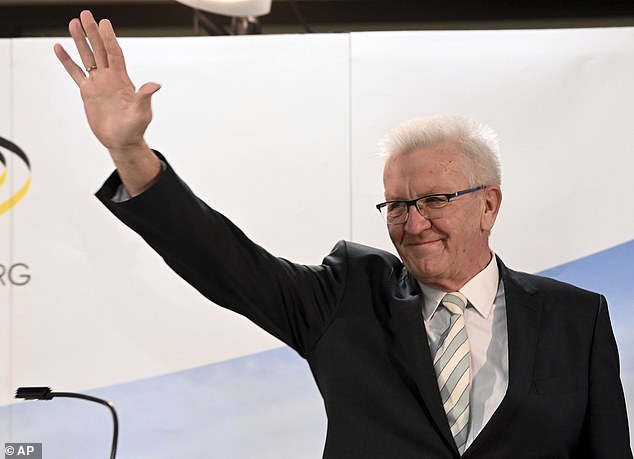 The Union bloc of CDU and CSU benefited from Merkel’s perceived good management of the pandemic over the past year.

It still leads national polls by a distance from the Greens and Social Democrats, but this year has started badly. Germany’s vaccination campaign has been significantly slower than those of Israel, Britain and the U.S.

Laschet says that he and Markus Soeder, the CSU leader and Bavarian governor who is the other serious contender to run for chancellor, will decide on the center-right candidate to succeed Merkel in April or May.

Soeder’s political standing has risen during the pandemic.

‘What we see today is that forming a government is possible without the CDU,’ said the Social Democrats’ candidate for chancellor, current Finance Minister Olaf Scholz.

‘And that is what we are aiming for in the federal election campaign.’

On Sunday, the number of confirmed coronavirus cases in Germany increased by 10,790 to 2,569,245, data from the Robert Koch Institute for infectious diseases showed.

Health experts have warned against easing lockdown measures in Germany due to the spread of the more infectious variant of Covid-19 first detected in Britain.

The head of Germany’s public health agency warned on Friday that the country is at the start of a third wave of the pandemic.

Stefan Pilsinger, a doctor and member of parliament for the sister party of Merkel’s ruling Christian Democrats, predicted that the spread of the British variant could cause a jump in cases like that seen around Christmas.

Karl Lauterbach, health expert for the Social Democrats, told the Augsburger Allgemeine newspaper that there can only be ‘more relaxation [of the rules] if there are stable of falling case numbers.’ 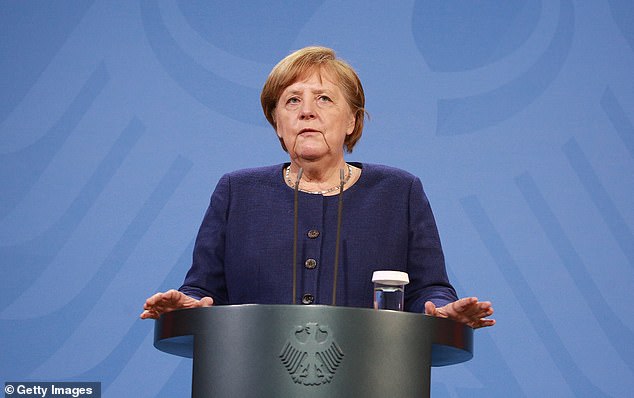 Chancellor Angela Merkel and state leaders agreed on a phased easing of restrictions earlier this month, and gave authorities the power to reimpose restrictions if necessary

He added that this was unlikely to happen anytime soon.

Earlier this month, Chancellor Angela Merkel and state leaders agreed a phased easing of restrictions along with an ’emergency brake’ to let authorities reimpose lockdown if case numbers rise above 100 per 100,000 on three consecutive days.

They are due to meet on March 22 to discuss the possibility of relaxing the rules further.

There has been wide spread frustration within the country due to the ongoing lockdown and slow pace of the vaccination roll out, further impacted by a face mask procurement scandal involving lawmakers within Angela Merkel’s party.

Last month Bild, Germany’s best-selling newspaper, led its front page with a picture of a Union Jack and the headline: ‘Dear Brits . . . We envy you!’ A caption added: ‘The English have announced their return to normality on June 21 . . . and here there is no hope.’

Merkel’s Christian Democrats have seen a decline in support in the states of Baden-Wuerttemberg and Rhineland-Palatinate, where elections are being held this weekend.

Protesters were due to gather in Berlin over the weekend to demonstrate against the lockdown.