In remarks likely to bolster Remainer opposition to the Prime Minister’s withdrawal agreement the German Chancellor is said to have made the remarks at the European Council in Belgium.

Her suggestion, reported by the Guardian, came amid confusion over whether the UK would be kept in the EU into November if Mr Johnson failed to win over Tory rebels and Labour Leave supporters in large enough numbers on Super Saturday.

While the summit significantly avoided pointing to any delay, it also fell short of categorically ruling one out if Mr Johnson loses his Commons vote.

European Commission president Jean-Claude Juncker had told reporters there will be no ‘prolongation’. Asked if he believed Parliament would approve the deal, he said: ‘I hope it will, I’m convinced it will. It has to.

‘Anyway there will be no prolongation. We have concluded a deal and so there is not an argument for further delay – it has to be done now.’

But European Council president Donald Tusk said any request for a delay would be considered if it is made. 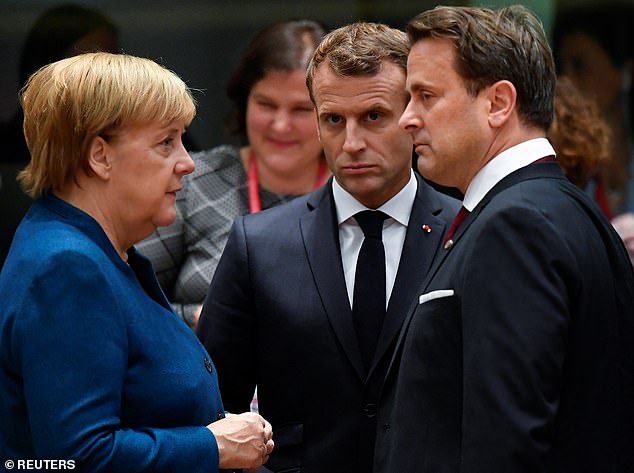 The German Chancellor (left, with Emmanuel Macron and Xavier Bettel) is said to have made the remarks at the European Council in Belgium last night 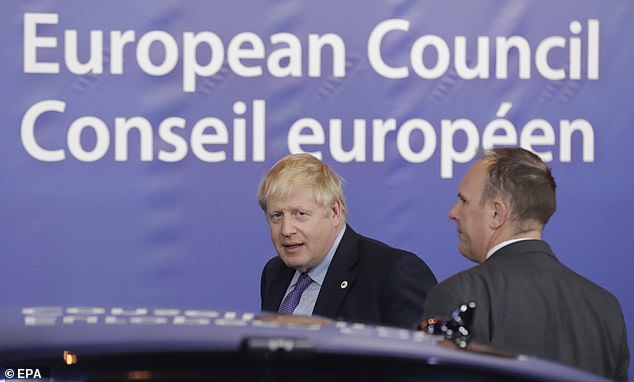 While the summit significantly avoided pointing to any delay, it also fell short of categorically ruling one out if Mr Johnson loses his Commons vote

With no chance of an extension, anti-No Deal MPs would face huge pressure to give their support to Mr Johnson’s agreement.

The final decision on whether an extension would be offered ultimately rests with the EU heads of state.

Donald Tusk, the president of the European Council, said last night that ‘if there is a request for an extension I will consult member states to see how to react’.

But Mr Juncker’s comments suggest that the EU does view Saturday’s vote as the last chance saloon for an orderly Brexit.

Should Mr Johnson be defeated in the Commons he will then have to decide what to do next: Try to renegotiate an improved version of the deal or switch to calling for a No Deal Brexit.

If he does the latter, believing that the EU will not budge any further, then he will likely need to force an early election to deliver it.