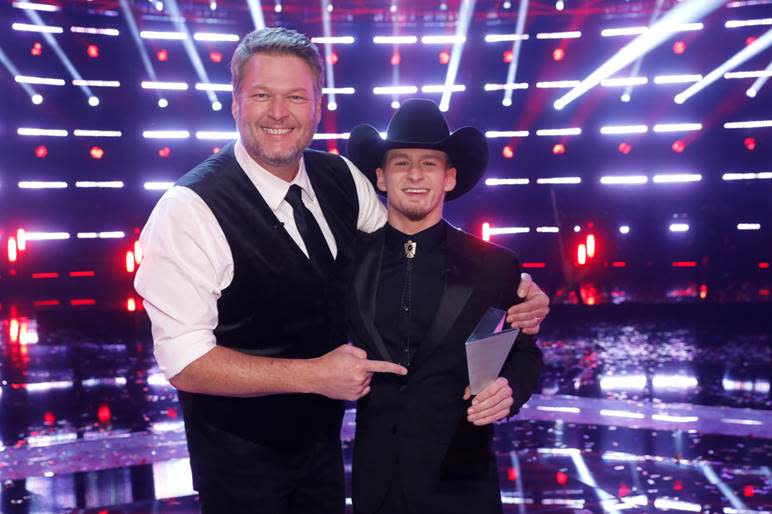 Perhaps it’s unsurprising that Blake Shelton, The Voice’s winningest and most popular coach, triumphed for a ninth time on Tuesday’s grand finale — after all, Blake had a 60% chance of victory, with three singers in the final five. In fact, I had predicted that Team Blake’s “pure country” contestant, a 22-year-old Georgia crooner by the extremely Opry-marquee-worthy name Bryce Leatherwood, would take the Season 22 title. (I must also gloatingly point out that I predicted the finale’s entire leaderboard, from fifth through first place, but I’ll get to those results in a bit.)

What did make Tuesday’s finale surprising and historic, however, was the fact that Bryce was the first Instant Save contestant to ever win The Voice. And Bryce was actually saved more than once this season: first during the Battle Rounds, by his coach, and then during the top 16 results show's Instant Save sing-off, as a viewer-voted wild card.

However, Bryce peaked at just the right time this week, with Monday’s razzle-dazzling, personality-plus cover of Elvis Presley’s “T-R-O-U-B-L-E,” and by the end of that top five performance night, Blake’s wife and fellow coach, Gwen Stefani, was predicting that Bryce would win. And in the final minutes of Tuesday’s finale, right before host Carson Daly announced the results, Blake was predicting that Bryce would be a country star no matter what.

“You already made it, man. You literally already made it,” Blake proclaimed. “I know my genre, and I know the country music fans out there. You’ve got a career ahead of you, dude. Congratulations already.”

As for Tuesday's other results, Team Blake’s indie song stylist, Bodie, had to settle for second place, while the country vote seemed to get split between Team Blake’s Brayden Lape, a green 16-year-old who’d only been singing for two years and deservingly came in last, and Team Camila’s country-rocker Morgan Myles, who placed third. Omar José Cardona, another Instant Save contestant who’d made it to the finale against the odds, was arguably the strongest technical singer among the top five — as his coach John Legend put it, he was “the voice” — but a corny, choreography-heavy Michael Jackson number on Monday’s live competitive show might have caused him to stall in fourth.

But all is not lost for any of the top five, particularly for Morgan and Bodie. For example, third-placer Morgan’s own coach, Camila Cabello, actually came in third on another TV talent show, The X Factor USA, with Fifth Harmony, but went on to become the biggest star to emerge from that Stateside series. And Camila assured Morgan, the only woman in The Voice Season 22’s top five: “This is such a crazy industry, and it's hard being a woman in this industry, but regardless of what happens tonight, you have such an unbelievable talent. You've moved me. You've moved all of us.”

And the best guest performance of Tuesday’s finale was a cover of Duran Duran’s “Ordinary World,” dedicated to the LGBTQ+ community (including those murdered in Colorado's Club Q shooting), by a man who did pretty well for himself after becoming the runner-up on another singing show: American Idol's Adam Lambert. Like Adam, The Voice runner-up Bodie has a talent for taking risks and making songs his own (Bodie's “Golden Hour” tour de force was declared possibly “the greatest performance I've ever seen on this show” by Blake), so he too could have a bright future.

As for the future of The Voice, the show’s 23rd season, premiering in the spring next year, will be Blake’s last; he’ll be joined for one last hurrah by his old pal, returning coach Kelly Clarkson, and two new cast members, Chance the Rapper and The X Factor U.K. veteran Niall Horan. Will Blake win one last time and go out with a victory tally of a perfect 10? Watch this space, and see you then.