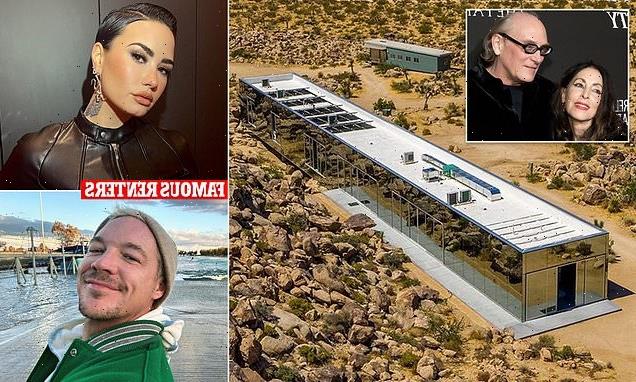 The Hollywood production duo behind American Psycho and The Virgin Suicides have listed their one-of-a-kind ‘invisible’ house in the desert for a whopping $18million – hoping the unique house will be as much of a hit as some of their past projects.

Chris and Roberta Hanley, who have been partners in life and work since meeting in college, spent years designing and building their dream home in Joshua Tree, California after being informed that their 720 square foot temporary guesthouse violated local regulations because it was too small.

The couple decided to go big – and go home. They began dreaming up their 5,500 square foot mansion that comes complete with an indoor-outdoor pool, four bedrooms, 360-degree views of the astounding natural views of Joshua Tree, and visual features are so spectacular the home was featured on Netflix’s ‘The World’s Most Amazing Vacation Rentals.’

It has also become something of an industry secret, playing host over the years to A-list guests including singer Demi Lovato and musician Diplo. 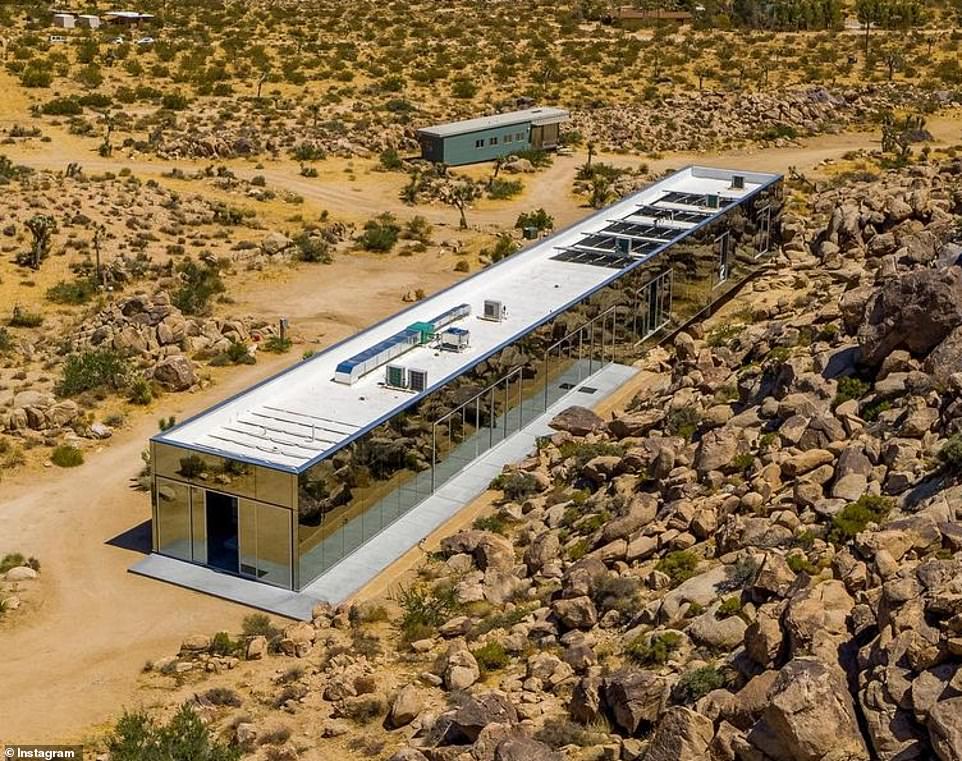 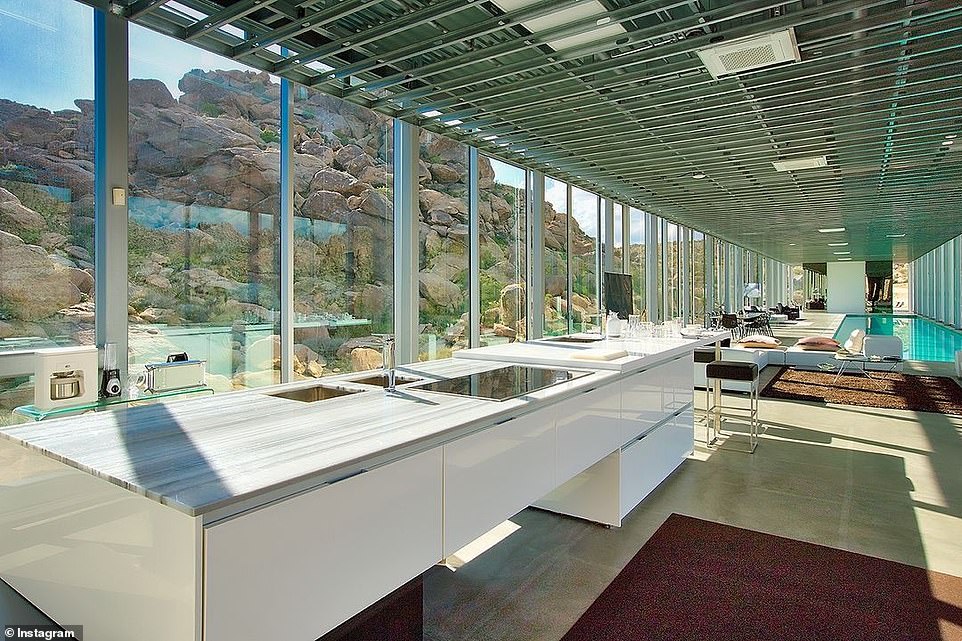 The house is adorned with few objects of a personal nature. The owners said they did this on purpose so as not to interrupt the minimalist flow of the structure

The home was designed by the couple and originally sketched by Chris, who said he was inspired by the black cuboid monolith that appeared in the film ‘2001: A Space Odyssey,’ as well as the work of Bauhaus architects Lugwig Mies van der Rohe.

Van der Rohe is part of a small school of architects credited with transforming the look of American industry – particularly, office buildings in cosmopolitan hubs. He famously designed the Seagram Building in New York City.

Chris’ initial effort, however, may have been a little less involved. ‘I just drew a rectangle on paper and said, ‘OK, we’ll build this,” he told the Journal. He said he was angling for an ‘ultra-minimal thing.’

The project, which began in 2011, was finally completed in 2019 just in time for the couple to spend the bulk of the COVID-19 pandemic in isolated paradise. Before the pandemic forced some to retreat permanently to their weekend homes, the couple would use the Joshua Tree house to escape Los Angeles on the weekends.

The roughly 5,500 square foot home has an entirely reflective glass exterior that mirrors the dry, rocky desert landscape. The visual effect allows the giant rectangular unit to blend in with the depths of its surroundings.

The four-bedroom home sits on close to 70 acres next to Joshua Tree National Park. It measures roughly 225 feet long from one end to the other. It is meant to feel like one large, open, floating space. 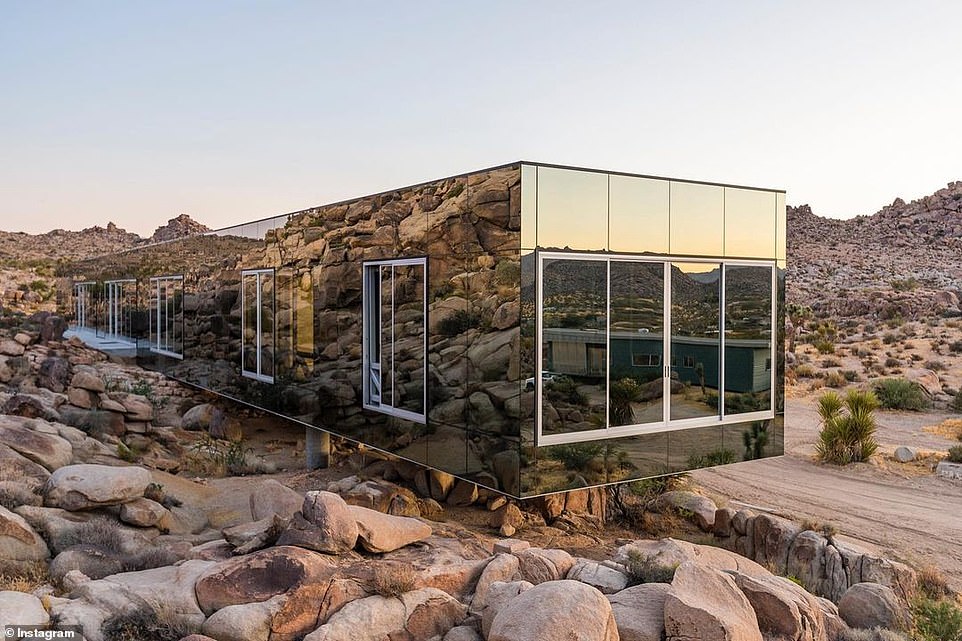 An outdoor view of the cantilevered portion of the house, which is supported by metal beams built into the desert rock 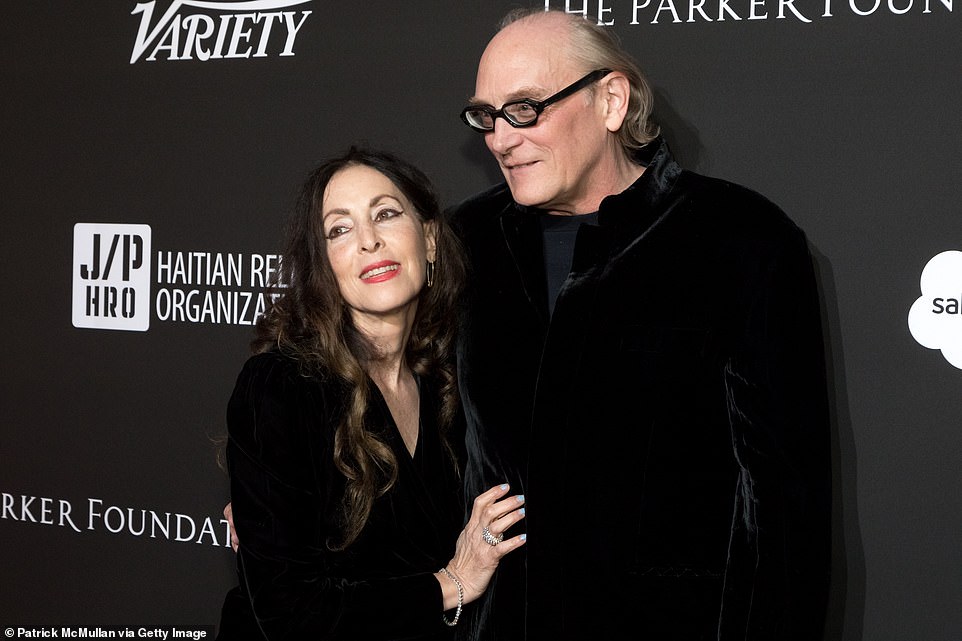 The house was built and is owned by Hollywood couple Roberta and Chris Hanley, who own the company that produced The Virgin Suicides, American Psycho and Spring Breakers 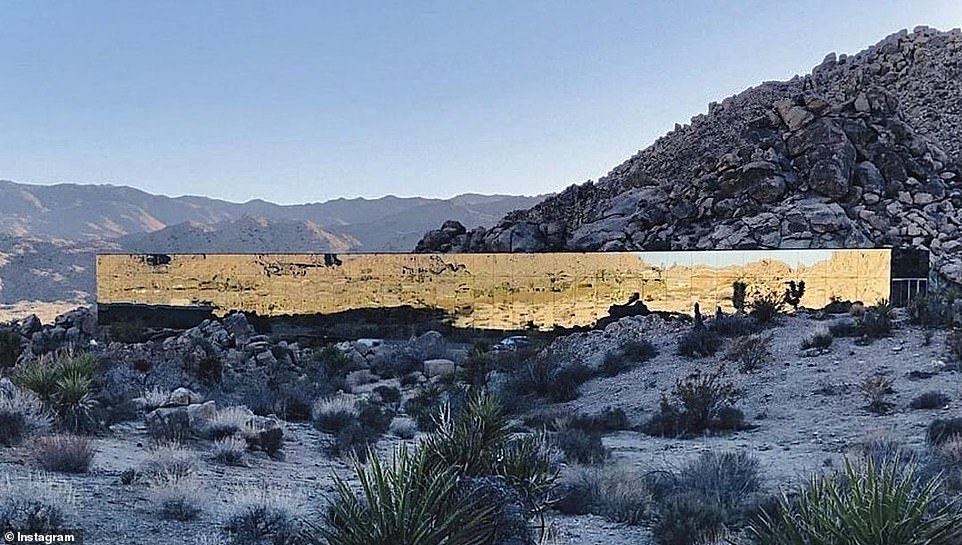 The spectacular unit measures about 225 feet long and 25 feet wide. It is largely environmentally sustainable and cantilevered to make it look as though one side is floating 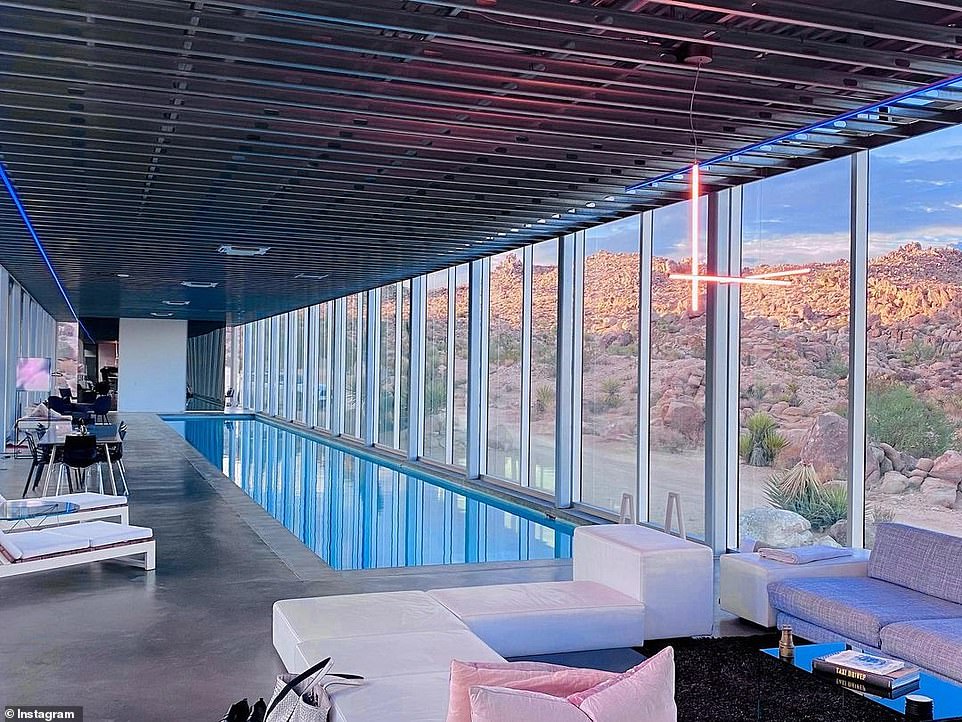 It features, among other things, a 100-foot-long pool in the middle of the house. The glass walls on three side of the house can open into the outdoor, making the pool a hybrid indoor-outdoor space 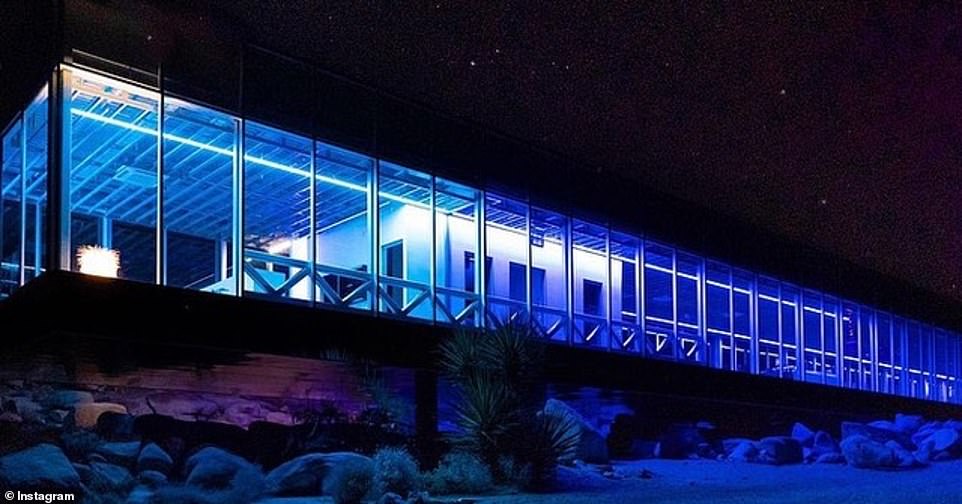 The look of the home changes with the weather and time of day. It is entirely reflective against the bright desert sun, mirroring its stunning natural surroundings, while at night it takes on an entirely different appearance 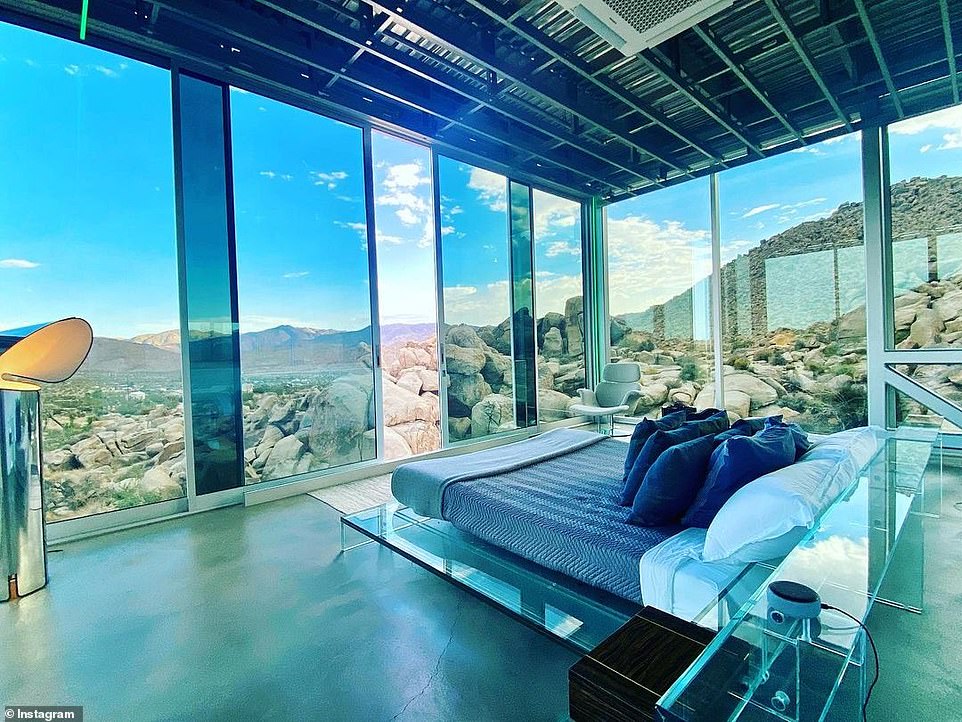 The master bedroom features a bed that sits atop a 2,500-pound glass base that took five workers two days of work to assemble and install

Inside are very few partition walls and most of the glass walls that line the home open into the outdoors. Nestled between the primary bedroom and the other two bedrooms is a large open-plan living area that features a 100-foot-long indoor pool.

Roberta says they opted to put the pool inside the home in order to create their own ‘ecosystem’ in the dry environment and bring moisture into the structure.

The structure is also environmentally sustainable. It is powered with a solar thermal system that uses heating panels for electricity, the pool and hot water. The roof is also made of an eco-friendly foam.

The environmental friendliness is a must considering the wildlife surplus that surrounds the home on all sides. The Hanleys reported seeing coyotes, rabbits, hawks, quail and other animals. Only several of which have ‘bumped into’ the reflective glass walls.

The house is also cantilevered, meaning only one side of it is fixed to the ground and the other side appears to be floating.

Inside the master bedroom, a bed sits on a 2,500-pound glass base that took five workers two days of work to assemble and install, said the couple. 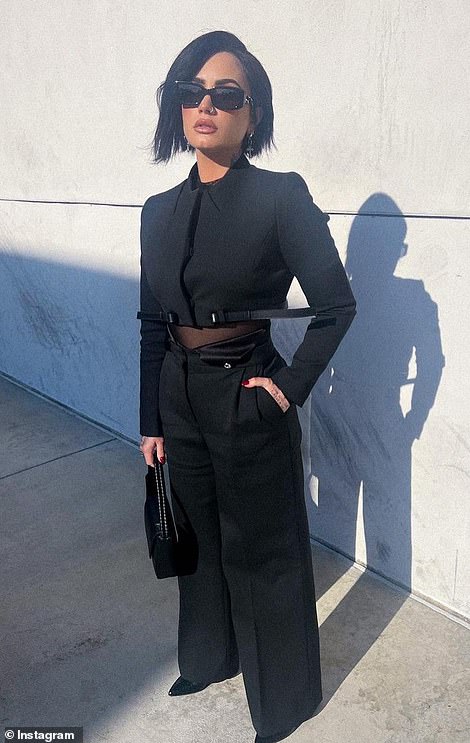 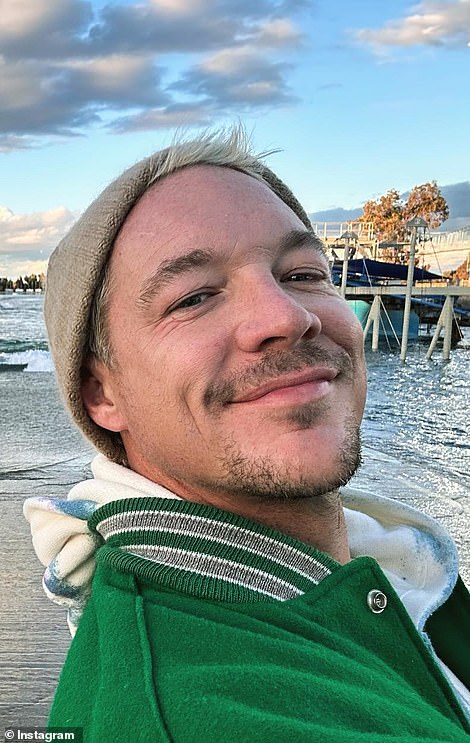 The home has been rented by some A-list names in Hollywood seeking a quiet time away from the city. Demi Lovato and Diplo include two of the guests of intrigue who have stayed at the house, which was formerly listed for rent at a price of $150,000 a month 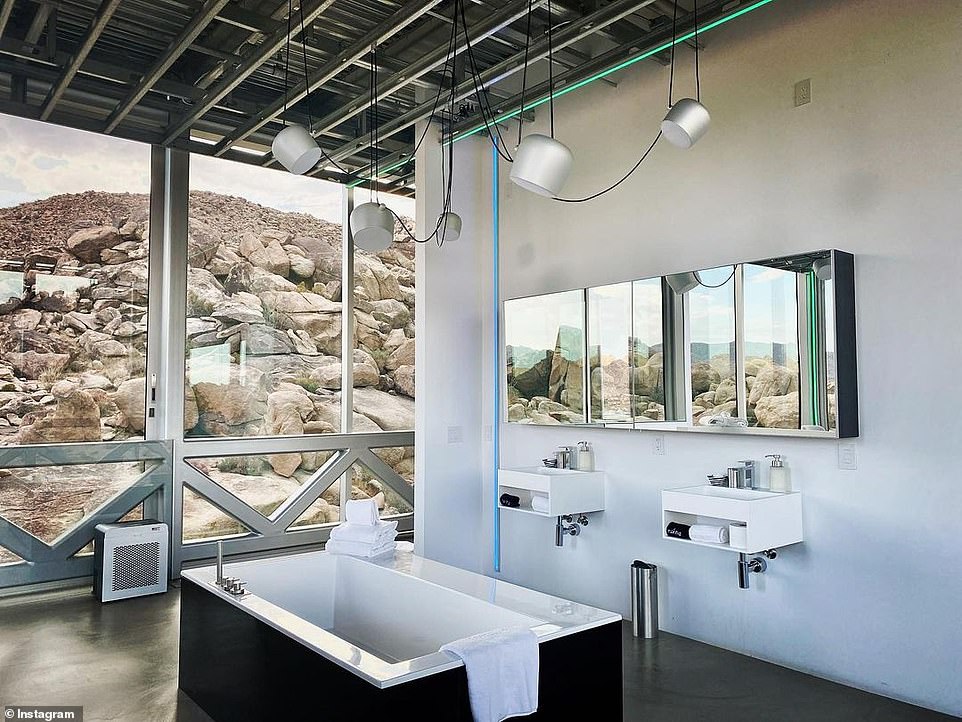 The house, which features glass that is mostly removable into the outdoors, has been featured on Netflix’s ‘The World’s Most Amazing Vacation Rentals’ 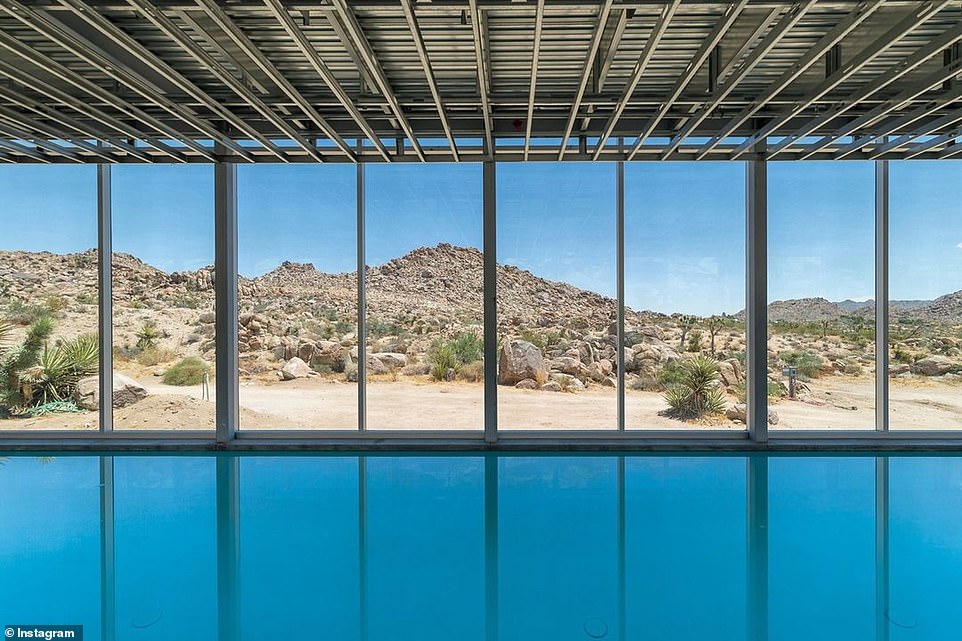 Few personal items adorn the spacious home. Roberta says they did this on purpose so as not to disturb the peaceful, minimalist aesthetic of the place.

‘I like that is just sort of exists on its own, so I don’t like to throw my clothes all around,’ she said. ‘I wanted it to be a place where your mind [could] drift and you could be inspired.’

The couple said that building the house took more than half-a-decade and millions of dollars. The steel beams alone cost half a million dollars, while the cost of the thousands of pounds of glass rose to $700,000.

Tomas Osinski, the architect who helped the couple design the home, said he jokes with the couple about the home that it took ‘so much money and so much effort, and you can’t even see it.”

The home is intended to honor the stunning nature of the area with its invisibility, despite the criticism that it became merely a ‘rich man’s folly.’ Its listed price now far surpasses any home in the surrounding area, where the median price hovers around $400,000.

In addition to film industry success, Chris spent years working in the music industry and said he was influential in bringing karaoke to the United States.

Realtors – especially those who currently hold the listing – say it is a pointless endeavor to compare the mirror house’s price to those in the area because it is so different. Listing agent Aaron Kirman of AKG told the journal that it would now be impossible to build another house like it because of new regulations that exist regarding the use of glass.