Britain’s first guide horse in TRAIN-ing: Digby the American miniature gets used to railway stations in bid to help his blind owner use public transport

Britain’s first ‘guide horse in training’ is getting used to railway stations – because he will eventually need to know how to board a train.

Digby, who is an American Miniature horse, was recently led around Darlington railway station by trainer Katy Smith.

The 18-month-old is also learning verbal commands including forward, wait, leave, crossing the road, going in a straight line and finding a post box.

Digby will later put his skills into practice on the busy streets of London, where he will live once fully trained. 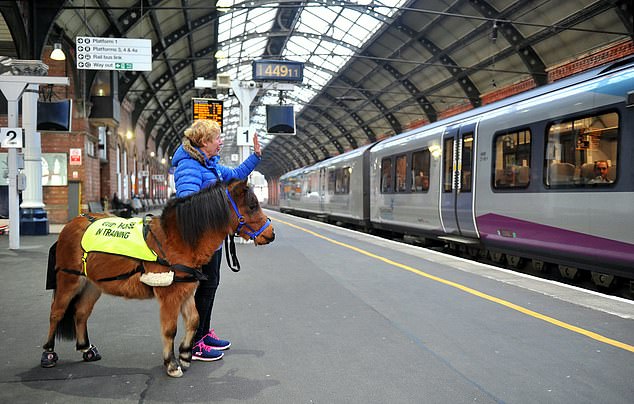 Next year, he will be introduced to the hustle and bustle of the capital as he is coached specifically for Helena Hird, who is visually impaired.

The civil servant at the Office for National Statistics, who has Stargardt disease, began losing her vision around a decade ago.

It’s hoped Digby will be able to get to grips with the likes of tube travel and attending restaurants and pubs so that he can help Helena run errands, commute to work, go shopping and socialise. 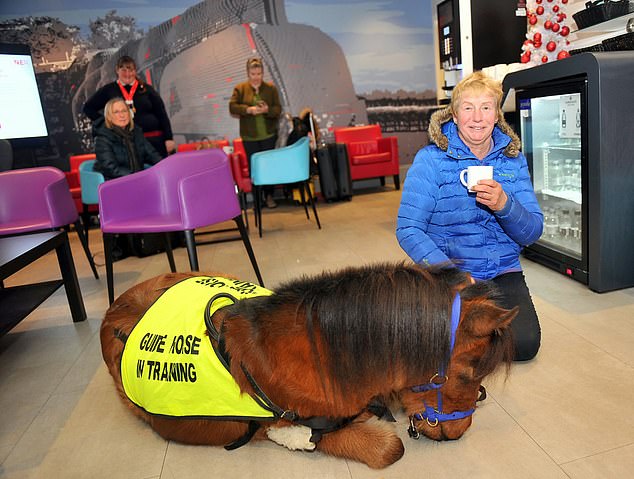 Digby will later put his skills into practice on the busy streets of London, where he will live once fully trained  (pictured in the first class lounge at Darlington railway station)

But due to an unexpected growth spurt, which took Digby to the height of 33 inches, Mr Patel decided the horse was too large.

He said the animal was no longer ‘practical’ because it would knock items off the shelves in supermarkets and couldn’t guide him around his office in Salford, Greater Manchester.

However, Helena, 51, decided he’s not too big for her – and the duo have started to bond and build a relationship. 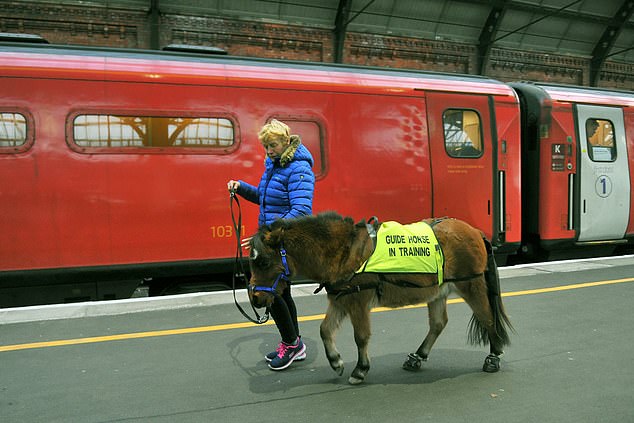 Next year, he will be introduced to the hustle and bustle of the capital as he is coached specifically for Helena Hird, who is visually impaired

She said: ‘I have used a cane but I personally found it quite isolating.

‘And because I don’t look visually impaired, I have quite often struggled to get people to help.

‘They are always lovely when they find out I am, but having a horse cuts through that. [People] realise there’s a challenge.’

Digby will also be taken into the office with her whilst she works – though ‘I’m not expecting him to curl up under the desk,’ she added. 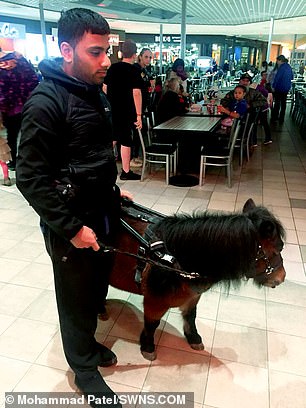 ‘He is very loving. He is like a dog, very friendly. He wants to be with you. [Digby] is a total sweetheart.

‘He is so patient, so gentle. I have got high hopes for him and me and a good partnership.’

American Miniature Horses can live to be more than 50-years-old, according to The Guide Horse Foundation and Helena is optimistic Digby will be a working companion for the rest of her life.

Helena made contact with trainer Katy Smith to enquire about getting a guide horse of her own and she was paired with Digby.

A large proportion of Katy’s work with Digby focuses on desensitisation, getting him used to people and noises and training him to be calm in situations that could cause alarm.

She said: ‘He just takes it all in his stride. He doesn’t bat an eyelid.

‘The training process with Digby is in the phase of getting him used to every single thing he will come across and even more in his working life.

‘He is also learning basic commands like forward, wait and stop, waiting for traffic, crossing the road, going in a straight line, finding a post box and now he is taller, he can find the opening to post the letter.

‘He can go up to a crossing and push the button and wait for a green man to cross the road.

‘He has got to be 110 per cent okay with everyday things. At the moment, he is proving that he is fine with everything.

‘Obviously there is always that chance [of being startled] and you have just got to think what it might be. It could be a cat running across the road, it could be a bird coming out of a hedge.’

Once with Helena, Digby will have roam her house and garden, where there will be a stable.