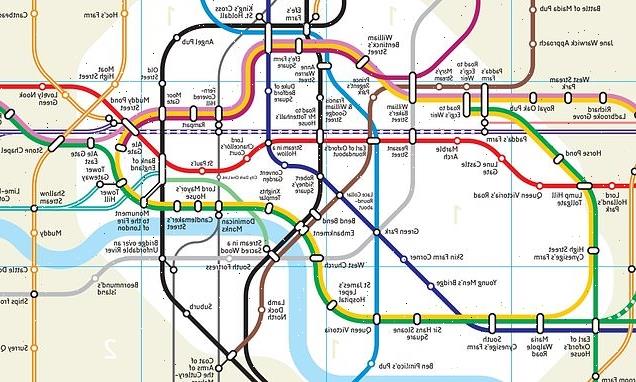 Next stop Cynsige’s farm! How High Street Kensington Tube station owes its name to Anglo-Saxon farmer… and the unusual origins of other TfL stops

Most Londoners would think they’ve never changed Underground trains at Peasant Street or Bridge Over An Unfordable River, but it’s quite likely they have – at least when the meanings of those stations are scrutinised.

Now, etymologist and author Mark Forsyth has produced a fascinating alternative Tube map which relabels every station on the network with its meaning – the aforementioned two being Bond Street and London Bridge.

Others include Cynsige for the Kensington stations, named after an Anglo-Saxon subsistence farmer. ‘Cynsige’ is portrayed as Kensi, ‘ing’ means ‘family of’ and ‘ton’ is for farm’ – overall giving the ‘farm of the family of Cynsige’.

Further people immortalised in the Tube map are a fisherman named Ecgi who is remembered in Edgware Road, meaning the ‘road to Ecgi’s fishing weir’ – while a boatman named Putta lends his name to the Putney stations.

There are also some rather comedic names on the east side of the District line, including ‘Road from Daecca’s House to the Waste Land’ which is Dagenham Heathway, and ‘Church with Pointy Gables’ for Hornchurch. 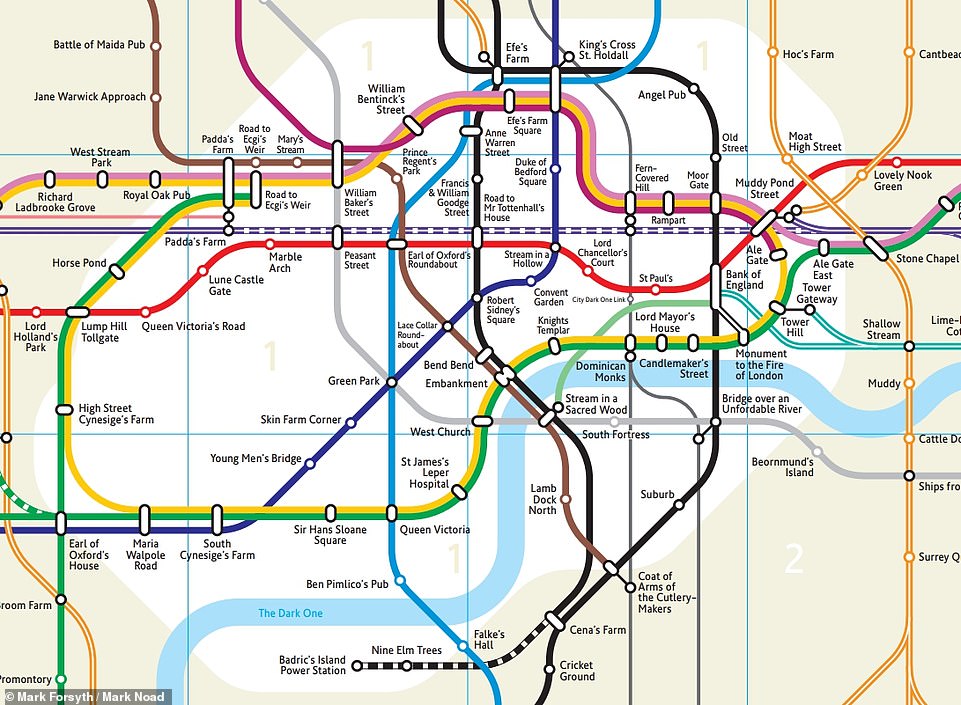 CENTRAL LONDON:  Etymologist and author Mark Forsyth has produced a fascinating alternative London Underground map which relabels every station on the network with its meaning – such as ‘Bridge Over An Unfordable River’ for London Bridge 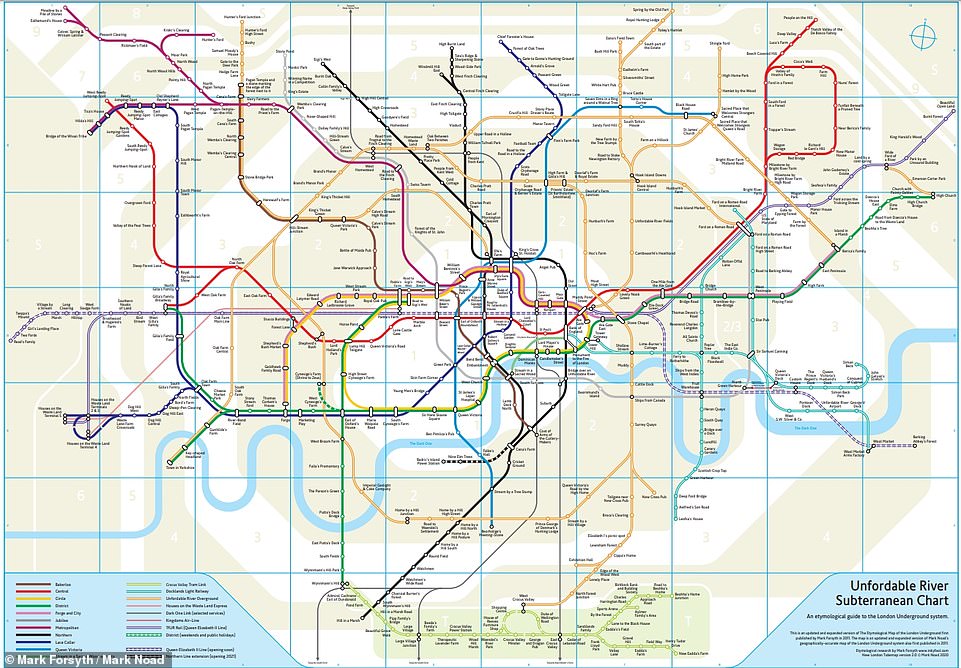 FULL MAP: Mr Forsyth’s map is a spin-off of designer Mark Noad’s geographically-accurate map, but relabels all the stations

The meaning of Kensington is one of those which is contested, with the Royal Borough of Kensington and Chelsea council claiming on its website that it ‘probably derives from Chenesitun, ‘town’ of Chenesi’s people’.

Mr Forsyth disagrees with this conclusion, saying: ‘Cynsige, whoever he was, now has a place called Kensington named after him. If you had told the Anglo-Saxon subsistence farmer that this was how he would be remembered, he would have been astonished.’

While there are no written records about Cynsige and very little is known about him, Mr Forsyth told The Times that the local authority ‘seems to be garbling their source’ because ‘ton’ means farm, not town.

Mr Forsyth said one of the most interesting people on the map is named Ben Pimlico, who was associated with a Native American tribe called the Pamlico – and whose name was used by a pub in Hoxton, East London as well as the Underground station near Victoria.

The author also referred to Wemba, a man who owned a wood in what became known as Wembley – pointing out that ‘when football fans sing about ‘Wemberley’ they are right to be putting the gap back in’. The place name literally means ‘Wemba’s clearing in the forest’.

He continued: ‘It’s the rural London underneath I love. Finchley, near where I grew up, is the least romantic name I can imagine, but when you realise that it means a clearing in a wood full of finches, it’s beautiful.’

Other unusual names are ‘Sacred Place that Welcomes Strangers Central’ for Walthamstow Central, ‘Horse Pond’ for Bayswater, ‘Skin Farm Corner’ for Hyde Park Corner and ‘Stream in a Sacred Wood’ for Waterloo.

Mr Forsyth’s map is a spin-off of designer Mark Noad’s geographically-accurate Tube map, which appears quite differently from the normal version produced by Transport for London which is seen across the network. 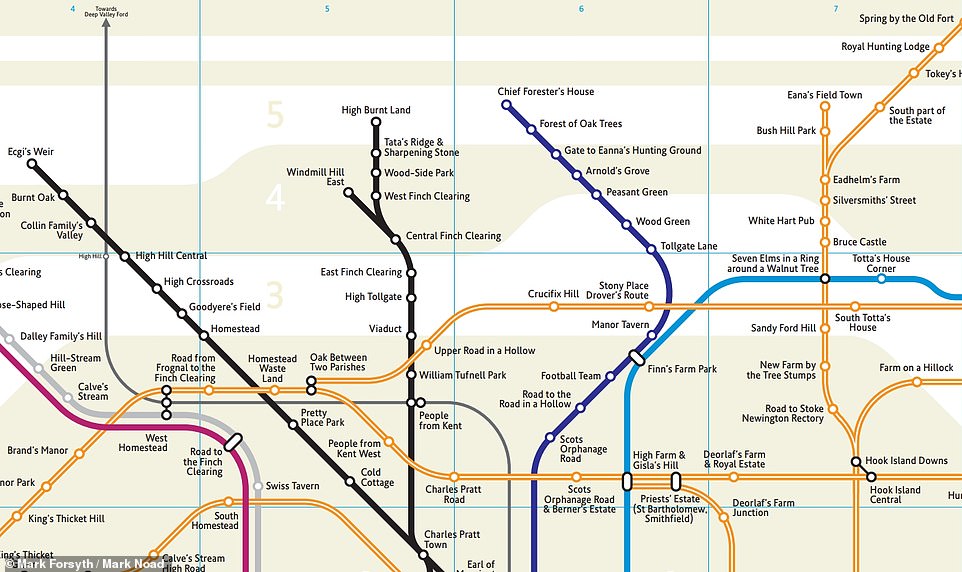 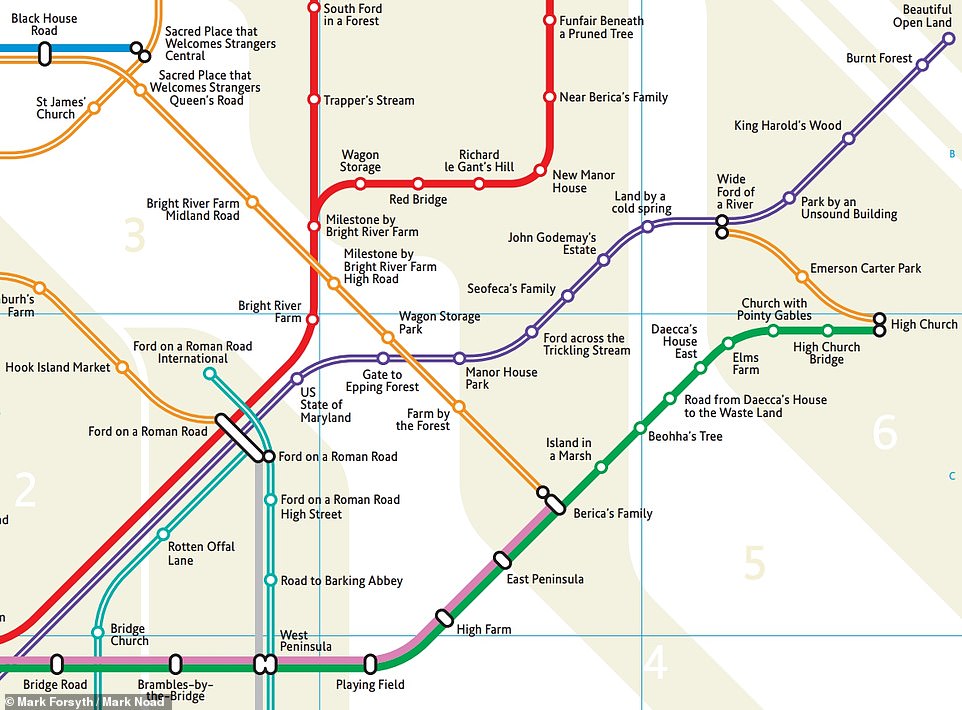 EAST LONDON: The original station meanings include ‘Road from Daecca’s House to the Waste Land’ for Dagenham Heathway 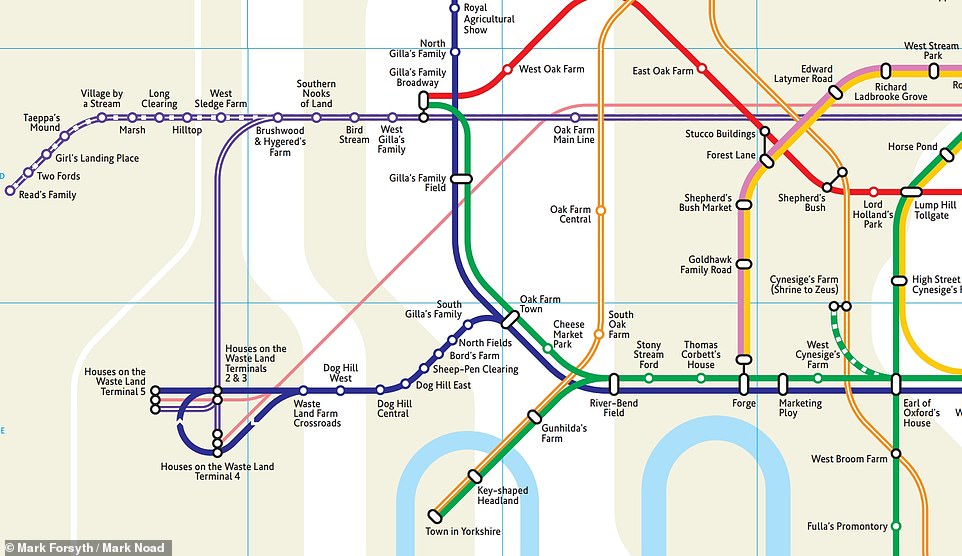 WEST LONDON: There are amusing names on the Piccadilly line, such as ‘Houses on the Waste Land Terminal 4’ for Heathrow

SOUTH LONDON: A boatman named Putta lends his name to the Putney stations on the South West section of the District line

The TfL production is a more diagrammatical version based on the design by Underground electrical draughtsman, Harry Beck in 1933, which was done in the same form as circuit diagrams he drew for his day job.

Mr Forsyth’s map also includes stations on TfL Rail which will eventually be part of Crossrail all the way to Reading – ‘Read’s Family’ – which include ‘Southern Nooks of Land’ for Southall and ‘West Gilla’s Family’ for West Ealing.

There are also some amusing names on the Piccadilly line, such as ‘Houses on the Waste Land Terminal 4’ for Heathrow Terminal 4, ‘Reedy Jumping-Spot Manor’ for Ruislip Manor and ‘Bridge of the Wixan Tribe’ for Uxbridge.

And the meanings of names on Central line stations include ‘Earl of Oxford’s Roundabout’ for Oxford Circus, ‘Ford on a Roman Road’ for Stratford and ‘Thatch Valley of the De Bosco Family’ for Theydon Bois.

‘The Illustrated Etymologicon: A Circular Stroll Through the Hidden Connections of the English Language’ by Mark Forsyth is published by Icon Books and available through Waterstones for £20 by clicking here