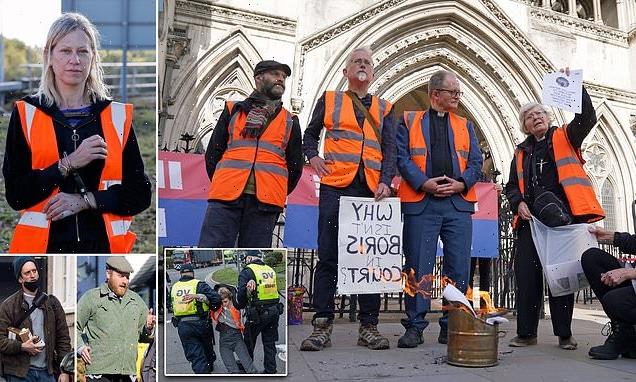 Action is FINALLY taken to jail Insulate Britain eco-zealots: More than a dozen of the ‘usual suspects’ behind motorway chaos will be named in court papers that would see them liable for two-year sentences if they continue protests

More than a dozen Insulate Britain activists will finally face court action – and possible jail – within days, the Mail understands.

Just over a month after the first roadblocks brought chaos to the motorways, officials are set to ask judges to take action against the eco-zealots.

There has been increasing dismay among ministers about the slow pace of action at National Highways, previously known as Highways England, and with police who have made arrests only to release protesters hours later.

But final details are now being added to legal papers which could see Insulate Britain demonstrators taken out of action at last.

The number of activists being targeted is understood to be between 12 and 15. The group are part of the 113 people named in a National Highways junctions which they will be accused of breaching.

A government source said: ‘We’ve identified a considerable number of protesters who have breached at least one of the injunctions we have in place. 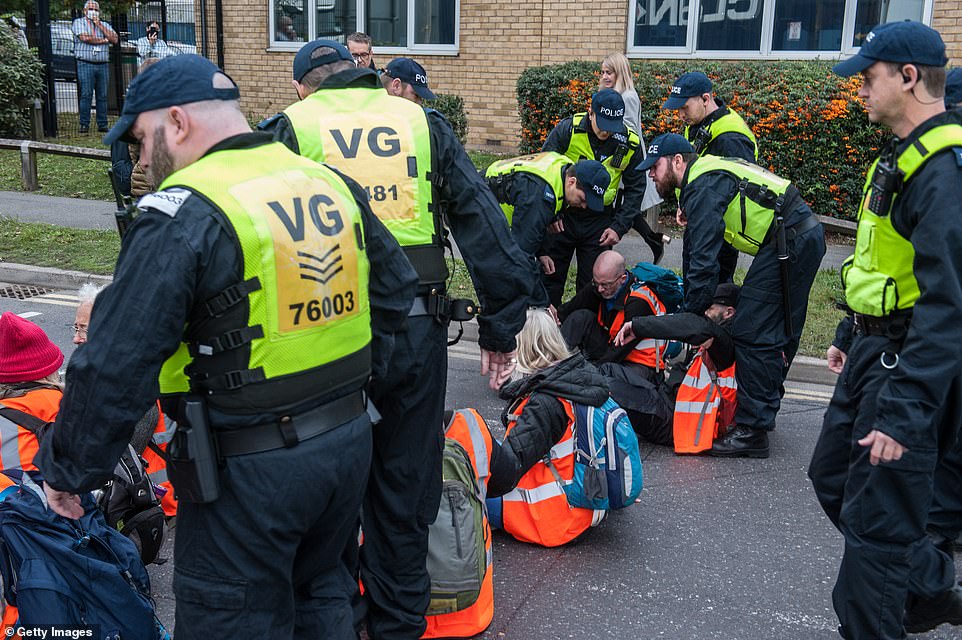 Final details are now being added to legal papers to take a dozen Insulate Britain protestors to court after they were caught breaching National Highways injunctions for blocking motorways and A roads in London. There is no suggestion those photographed are in breach of the injunctions or have committed imprisonable offences 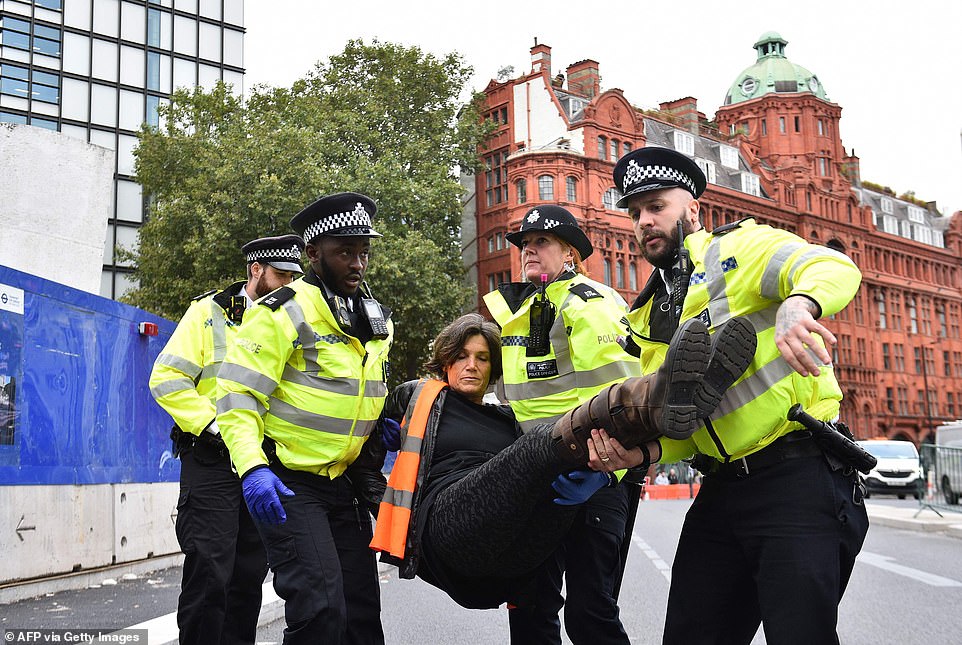 There has been increasing dismay among ministers about the slow pace of action at National Highways, previously known as Highways England, and with police who have made arrests only to release protesters hours later 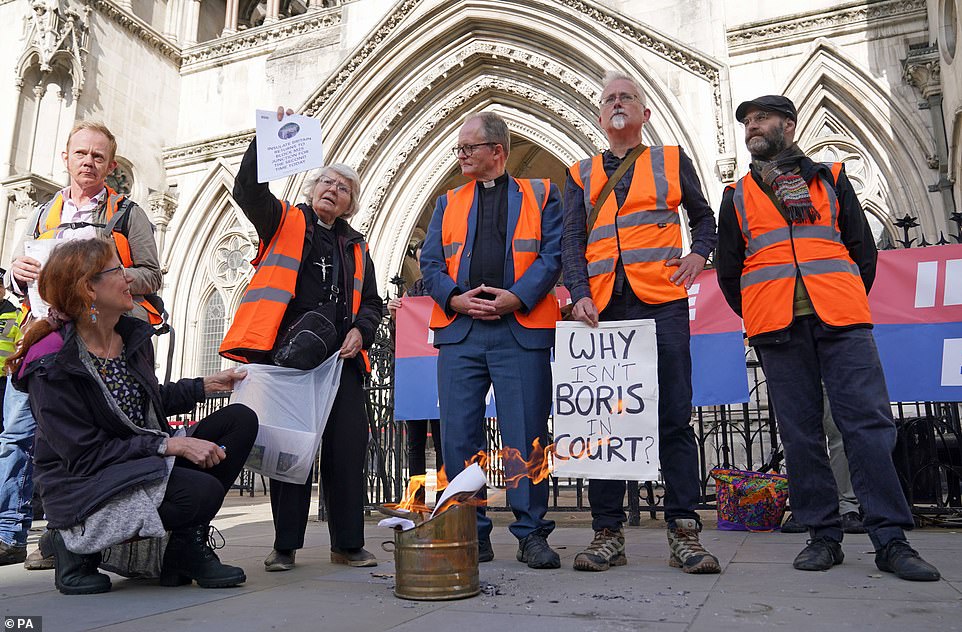 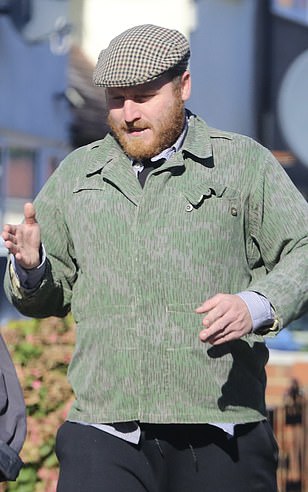 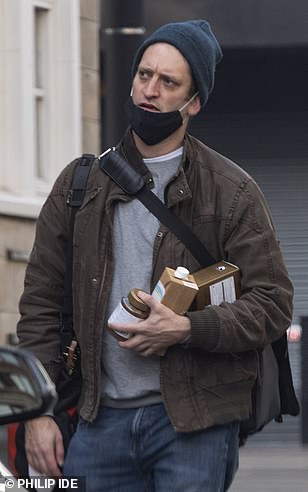 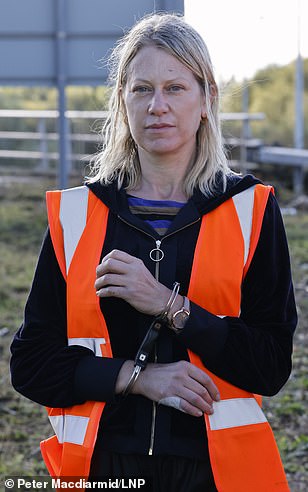 Insulate Britain is run by ringleader Liam Norton, whose own home was found to have no cavity wall insulation. Other leaders in the secretive group include Extinction Rebellion veteran David McKenny and Cathy Eastburn, whose husband was revealed to be Ben Plowden, a Transport for London director. He has stepped down from his £170,000-a-year role. It is not known if any of them are being targeted as part of the injunction breach

‘National Highways lawyers are now working with the police to put together evidence in order to take these people to court.

‘We hope to get this in front of the court either later this week or early next.’

The process is fraught with difficulties, however.

National Highways will have to apply to the High Court for committal proceedings against the activists, paperwork will have to be issued to each activist and a date for a trial will then have to be set.

If activists are found guilty of breaching an injunction they could face up to two years’ imprisonment for contempt of court.

On Tuesday protesters showed their contempt for the law by setting alight copies of the injunction papers outside the Royal Courts of Justice in London.

Members of the group have vowed to continue their disruptive protests, in which they typically glue themselves to the road at busy motorway junctions – despite the risk of unlimited fines and up to two years in jail.

Insulate Britain is run by ringleader Liam Norton, whose own home was found to have no cavity wall insulation.

Other leaders in the secretive group include Extinction Rebellion veteran David McKenny and Cathy Eastburn, whose husband was revealed to be Ben Plowden, a Transport for London director. He has stepped down from his £170,000-a-year role. 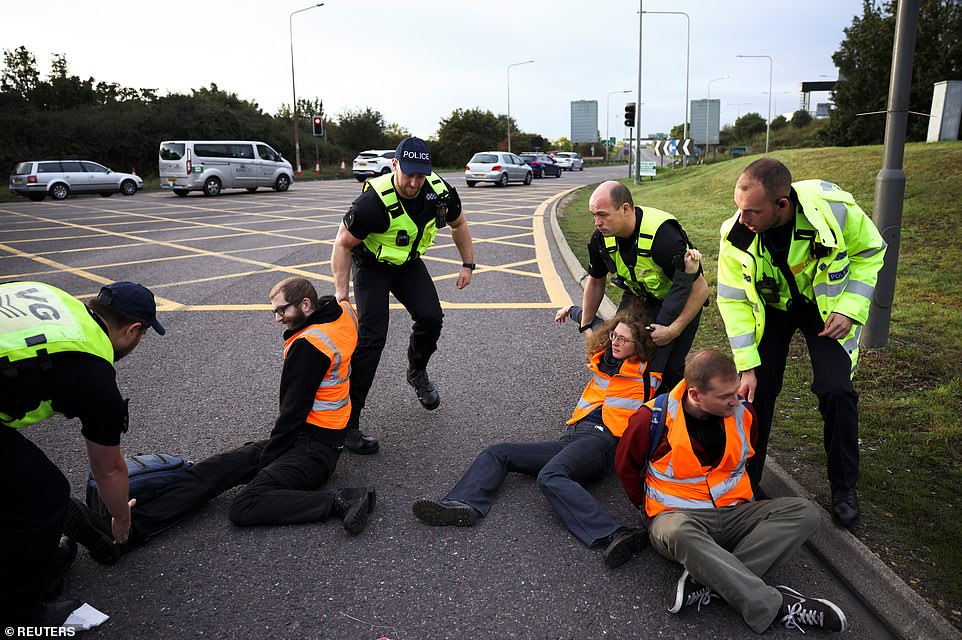 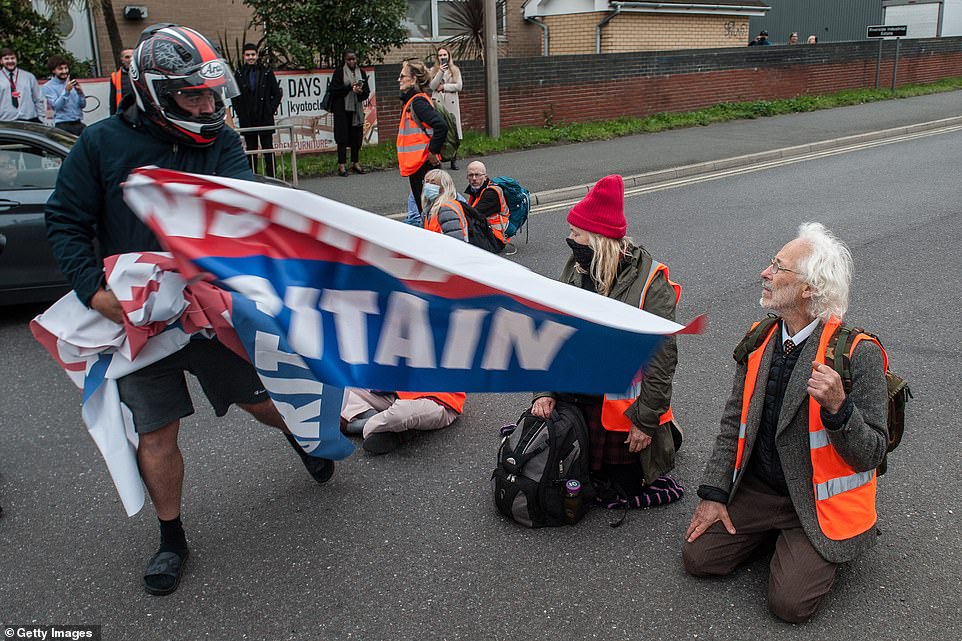 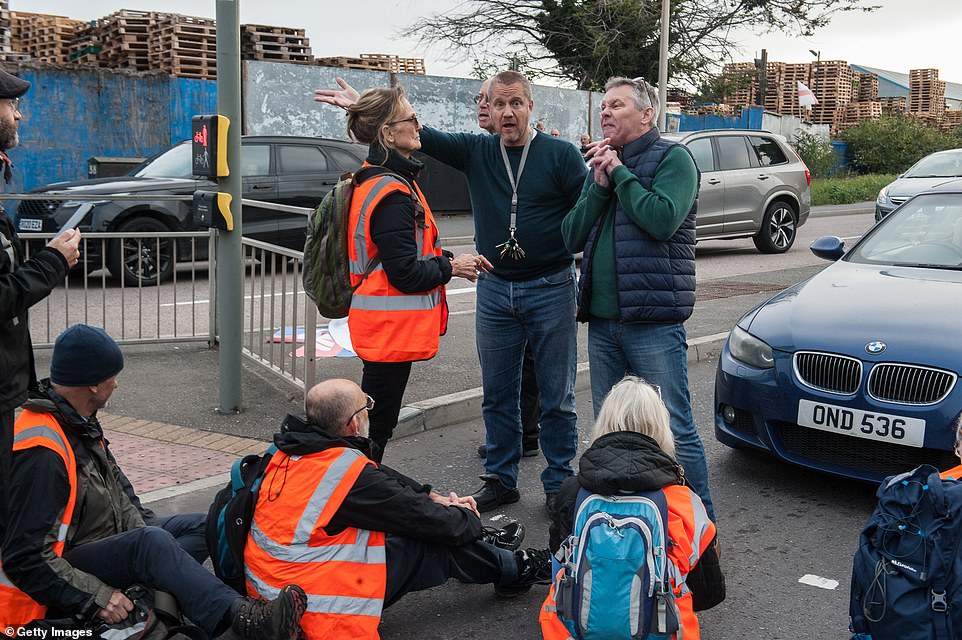 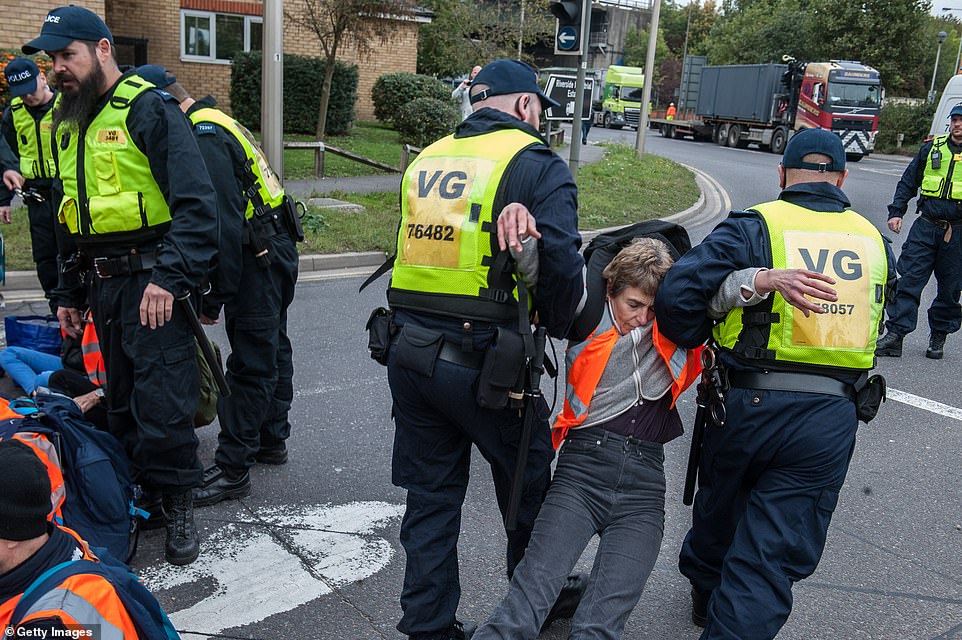 Former Labour leader Ed Miliband last night hit out at Insulate Britain protesters for damaging support for their cause.

He branded the group’s tactics as ‘counterproductive’ and warned they risked ‘alienating’ the public.

The Extinction Rebellion splinter has already outraged motorists across London by blockading several motorways and A roads, leaving ambulances stuck and children late for school.

Speaking at a Green Alliance think-tank event, Mr Miliband told the Mirror: ‘Part of the task of peaceful protest is to win people to your cause, not alienate them.’

‘Some people will have said, “hould they really be off school?”,’ he added.

‘But it pricked people’s consciences, it drew attention to the issue, it superpowered government action, but it didn’t alienate huge swathes of people.’

A High Court hearing was taking place to extend the series of injunctions barring them from the M25, the Port of Dover and major A roads around London.

A further hearing is due to take place next week.

A previously-announced plan to use a catch-all injunction against Insulate Britain is understood to have hit the legal buffers.

Officials had said they planned to obtain a ‘contra mundum injunction’ with far more sweeping terms that would be easier to enforce.

However, lawyers told ministers they would have to list the ‘essential nature’ of each separate motorway and A road in the country in order to secure such an injunction.

In the face of such an administrative nightmare, the idea is now thought to have been ditched.

The Mail reported last month how Insulate Britain is planning to fill Britain’s jails with hundreds of eco-activists in an attempt to create a ‘political crisis’ for PM Boris Johnson.

They believe that significant numbers of activists being jailed could light a powder keg on wider disorder, in the run-up to the Cop26 environment summit in Glasgow next month.

In September, activist Shel MacDonagh said 300 individuals would need to get themselves jailed in order to force the Government to grant concessions to the group.

‘We need this campaign to continue going, and we think we need in the ballpark of 300 people to be able to face prison for us to be able to get a chance for this [a government concession] to happen,’ she said.

Priti Patel, the Home Secretary, has announced plans for a new type of Asbo to tackle the protests.

Criminal Disruption Prevention Orders – dubbed ‘Asbos for crusties’ – are intended to be quicker to enforce than injunctions.

A specific new offence will also be created to deal with protests by Insulate Britain and its parent group Extinction Rebellion.

It will be made a crime to ‘interfere with critical national infrastructure’, including major roads, railways, seaports, power stations and newspaper printing presses.

The new crime will carry up to six months’ imprisonment.

However, both new powers will have to pass through Parliament and are not expected to come into force until spring or summer next year.