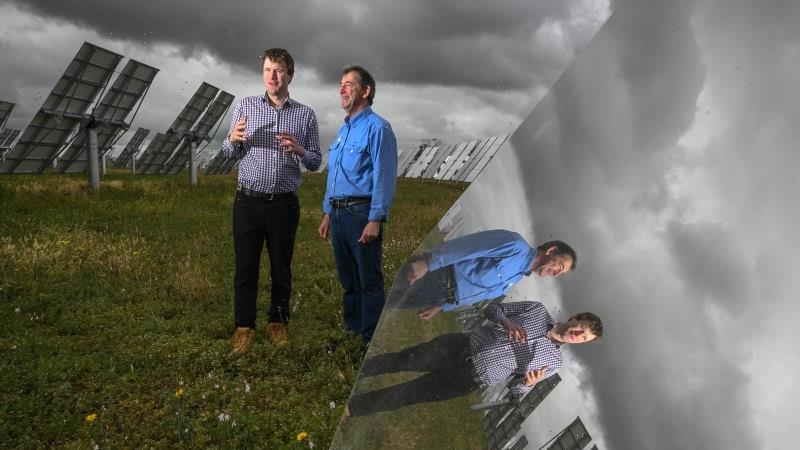 The sunlight shines especially bright in Mildura. This should be the perfect place to build the huge solar farms we need if we’re going to green our electricity grid – but solar farms here have made huge losses, some forced to operate at half-capacity and others unable to run at all, as the ageing and weak grid struggled to handle the new influx of solar power.

Among industry figures, Mildura’s electricity grid has been nicknamed the rhombus of regret, but a little-known Australian company hopes to change that with a world-first solar hydropower plant. 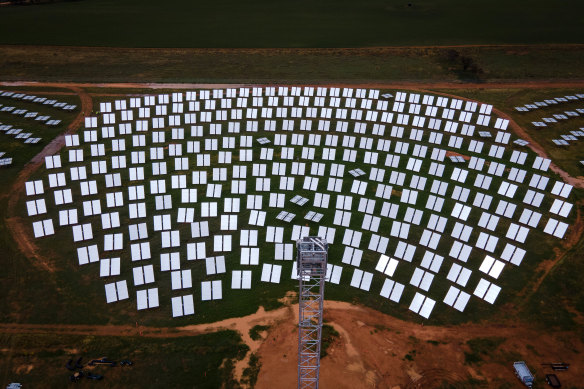 Across a sprawling green paddock outside Mildura RayGen has built 1092 heliostats – mirrors that move to catch the sun.

They focus the sunlight on four towers. When the sun’s shining, the collectors are too bright to safely look at; the combined heat could melt steel.

At the top of the towers are 441 ultra-expensive, ultra-efficient solar modules borrowed from the satellite industry, which turn sunlight into power.

But RayGen’s real trick lies behind the panels: a thick stack of semiconductors, industrial crystals and copper heatsinks, manufactured in Nunawading, that whisk away the enormous heat.

Other solar plants throw that heat away as waste; RayGen uses it to heat water, which is then stored in 17,000-square-metre underground pits. At night, when the sun isn’t shining, the hot water is used to spin a turbine, generating electricity – enough to power 1000 homes for 17 hours. A water battery, turning the sun into a 24-hour power source.

“It’s two-for-one. You make a lot of electricity and a lot of heat,” said John Lasich, RayGen’s founder.

In the last 20 years, we have solved making cheap renewable energy. RayGen’s argument is we remain terrible at building renewable energy grids – and that’s a problem they can solve.

That’s because renewable energy is made in the middle of the day when electricity consumption is highest in early evening. And it’s typically made a long way from the city, forcing the ageing grid to carry it thousands of kilometres. 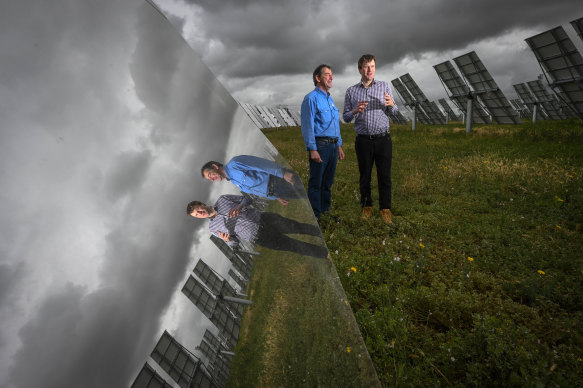 “You’re selling power in the middle of the day when prices are rubbish and the grid is congested,” said Will Mosley, RayGen’s chief commercial officer. “You cannot right now run a grid off green energy. We would see that happening globally if you could.”

The solution is storage; make the power during the day, move and sell it at night. Many have promoted Tesla-style batteries, but RayGen is sceptical. “Batteries are too expensive,” Mosley said. “You can’t buy them right now. The raw material is a massive constraint.”

And they don’t last long enough: only four to six hours of charge.

RayGen’s solution is known as a thermal-hydro battery. Hot water is stored in one tank. Solar electricity is used to chill another tank to zero degrees.

The hot water is fed through an organic rankine cycle turbine, where it heats pressurised ammonia into vapour, spinning the turbine. The cold water then condenses the ammonia, and the cycle starts again.

Cheap storage that can hold power all day and then feed it into the grid at night. “It’s roughly equivalent to a big battery,” said Mosley. “But as you can see, it’s really just a dam filled with agricultural water.”

Will it work? The technology is sound, said Tony Wood, director of the Grattan Institute’s energy program. “The question is the economics.”

Solar panels are really cheap. RayGen’s more-complicated system needs to produce a lot of electricity to be competitive. 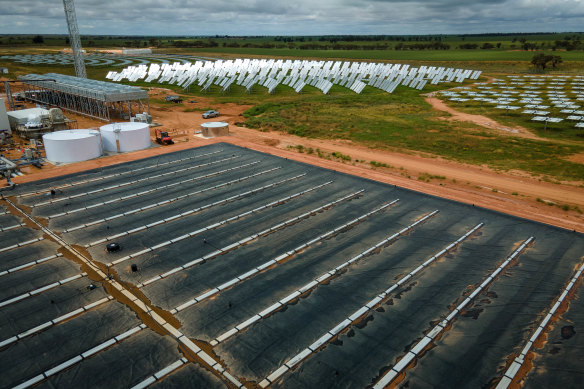 If batteries become better and cheaper, that might blow up RayGen’s business model. Experts are split on if that would happen. “No one really knows. There’s massive innovation,” said Professor Bruce Mountain, director of the Victoria Energy Policy Centre. (RayGen claims its costs should also fall over time.)

But no one really knows what a green grid will look like. It’s possible we’ll need lots of different forms of storage to have energy coming online at different times of the day.

“As we get a system that has more and more solar in it, the case for alternatives that have somewhat different characteristics that can balance out the role of solar becomes stronger,” said Professor John Quiggin, a senior economist at the University of Queensland.

The project is backed by fossil-fuel giants, including Schlumberger, Chevron and AGL, plus $15 million in taxpayer funding from the Australian Renewable Energy Agency. 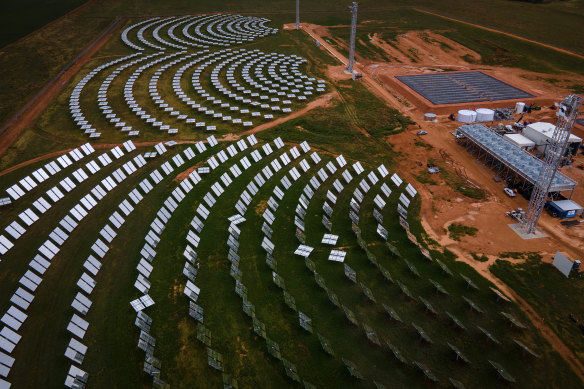 “It’s two-for-one. You make a lot of electricity and a lot of heat”,” says John Lasich, RayGen’s founder.Credit:Eddie Jim

Now the $30 million pilot plant is generating power, they hope to roll it out nationwide; a full-scale 3.6 gigawatt project in South Australia was announced last year. When it’s finished it will be the world’s largest energy storage plant other than pumped hydro.

“It’s fantastic technology, really interesting. Ultimately, it will come down to how scalable it is and how much it costs,” said the Grattan’s Wood. “But you’ve got to try stuff. You’ve got to have a go.”

The Age travelled to RayGen’s Carwarp project as a guest of the company.

Get to the heart of what’s happening with climate change and the environment. Our fortnightly Environment newsletter brings you the news, the issues and the solutions. Sign up here.