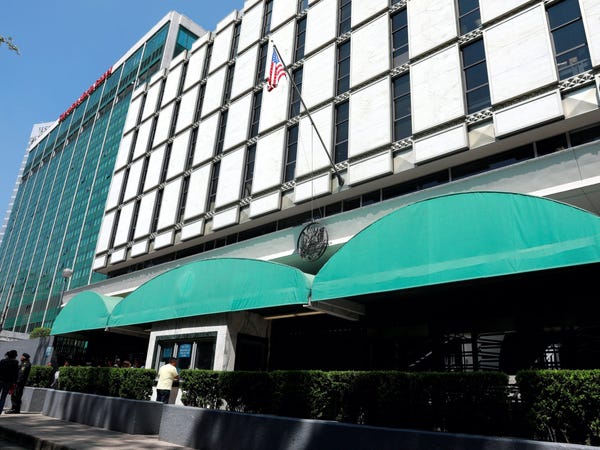 A US embassy employee sexually abused at least 23 women, keeping more than 400 photos and videos of his activities on his iCloud account, according to federal prosecutors.

Brian Jeffrey Raymond, a staffer at the US embassy in Mexico City, Mexico, drugged and sexually assaulted the women over the past decade, according to prosecutors who detailed the scope of his alleged abuse in court filings reviewed by Insider. The Daily Beast first reported on the charges against Raymond.

The FBI began investigating Raymond after Mexico City police responded to calls about "a naked, hysterical woman desperately screaming for help from the defendant's balcony" on May 31, prosecutors say. Mexican authorities escorted the victim to an ambulance and noted she appeared drugged, according to court documents, and contacted US authorities because the incident took place in an apartment leased by the US embassy. Forensic findings showed that Raymond had intercourse with her when she wasn't aware of what was going on, prosecutors say.

The incident set into motion a larger investigation. A forensic analysis of Raymond's phone found that he deleted videos of naked, unconscious women, prosecutors say.

After obtaining a search warrant for his iCloud account, prosecutors said they found approximately 400 videos and photos relevant to the investigation, as well as photos and videos on his laptop in his Mexico City apartment.

The images dated back to at least 2011, and at least nine of the 23 identified victims appeared to have been recorded in the embassy-leased apartment, prosecutors say. A representative for the US State Department declined to comment to Insider.

Even after Raymond, a civil service employee of 23 years, was interviewed by authorities in June, he continued his behavior, prosecutors suggested in a detention memo. One woman, who spent the night with Raymond a week before his arrest, told investigators she remembered only "fragments" of her encounter with him, according to court filings.

Prosecutors called Raymond an "experienced sexual predator" whose activities were "escalating." He was charged with one count of coercion and enticement, related to him inducing one alleged victim to travel so that he could sexually abuse her, according to the court documents. Prosecutors indicated in court filings that more serious charges, for the 23 victims they identified, are forthcoming.

Raymond was arrested on October 9 in San Diego and has been denied bail. Prosecutors said he poses a flight risk, given his two decades in civil service and fluency in multiple languages. An attorney for Raymond hasn't yet entered a plea on his behalf and didn't immediately respond to Insider's request for comment on Tuesday. Court filings show that a hearing for Raymond's case is next set for December 14.

DJ Joel Corry has given fans an insight into his bungalow which boasts his very own music studio and home...