The biopsies and blood tests completed, and Zainab Mughal's rare blood mutation explained, her parents came to grips with the sudden complication in their daughter's cancer fight. In order for the 2-year-old to survive, it would take something they had absolutely no control over: The kindness of strangers.

Zainab, who lives in Florida, was diagnosed in October with a neuroblastoma, an aggressive cancer that usually occurs in children. Doctors said the tumour had been growing inside Zainab's abdomen for nearly half of her life. Fighting it would require two bone marrow transplants and a series of transfusions to replenish her blood supply as chemotherapy shrinks the tumour to nothing, doctors said. 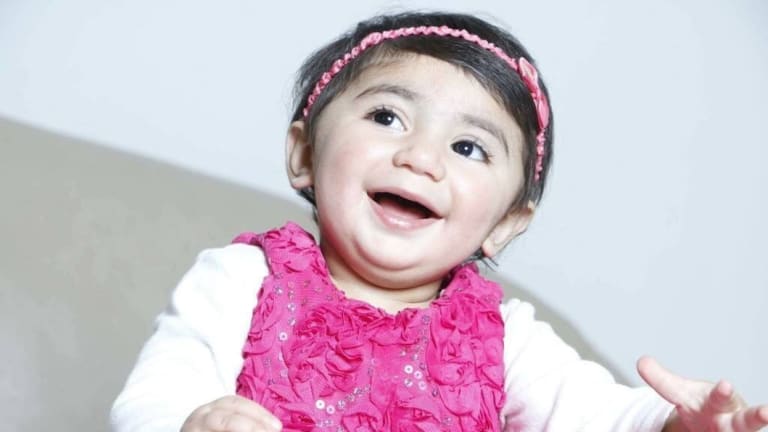 "The results came in and the results were really bad," her father, Raheel Mughal, said in a video. "We were all crying. This was like the worst thing we were expecting."

There was another big complication: Mughal and his wife were tested to see if they were compatible blood donors. They weren't. A parade of family and friends came into the hospital to be pricked by needles. No luck.

"And that's when it became more of an alert," Mughal said.

Now, the toddler is at the centre of a worldwide search to find donors with the same extremely rare blood who can help her, a battle dependent on statistics and probabilities that her parents have become all too familiar with.

Donors must have "A" or "O" type blood and be of Pakistani, Indian or Iranian descent, according to OneBlood, the nonprofit blood centre that is leading the search. But even in those populations, fewer than 4 percent of people have blood that Zainab's body won't reject.

Most people never have to contend with the often-hidden world of rare blood transfusions.

There are some 360 different antigens on the surface of red blood cells, but most people's bodies won't negatively respond to those markers, said Frieda Bright, OneBlood's reference lab manager. For the majority of people, getting the blood type right is all that matters.

But a small percentage of people – including Zainab – produce antibodies in the presence or absence of certain antigens, prompting the body to reject the blood. But those people still get into accidents or come down with diseases like everyone else, so there's a network of blood centres in the US that specialise in rare blood, keeping a database of scarce combinations of antibodies and shuttling it across the country to patients in need.

That's a big part of Bright's job. She's part of a team that works around the clock, 365 days a year, to identify and catalogue units of rare blood and, when possible, fulfil requests. Still, Zainab's case is so rare that Bright – who's worked in the industry for 20 years – had to go to a textbook to learn more about it.

Now OneBlood is working with the American Rare Donor Program, an organisation that connects donors with needy patients across the world. For Zainab, three compatible donors have been found – one lives in London, the other two are in the United States.

That's a promising sign, but it's not enough. Rules limit how frequently donors can give blood. Zainab's doctors would have to line up as many as 10 donors to ensure that whenever Zainab needs a blood transfusion, she can get it.

It is the missing piece of a treatment plan that doctors say is already shrinking Zainab's tumour.

More than 1,000 people of Iranian, Indian or Pakistani descent have donated blood in an attempt to see if they are compatible with Zainab.

But her parents and a team of experts realise it's not over until Zainab walks out of the hospital, cancer free. So they've launched an awareness campaign using the best weapons they have: Zainab's story, and an endless stream of adorable – occasionally toothless – baby photos. One shows the toddler wearing a birthday cap and a polka-dot pink dress, another shows her posing for a photo with a cream-coloured dress and flowers and ribbons in her hair. A third, post-diagnosis, shows huge brown eyes beneath a bald head.

She is still too young to fully grasp the gravity of what she needs or the overwhelming odds stacked against her. But her father hopes to one day explain to her how a group of people they did not know helped save her life.

"It's a humble request, and I request it from my heart," Mughal said in a video produced by OneBlood. "My daughter's life very much depends on the blood.

"What you're doing to save a human life, to save my daughter's life, it's amazing. Once my daughter grows, I'm going to remind her that the effort was made for you to save your life."