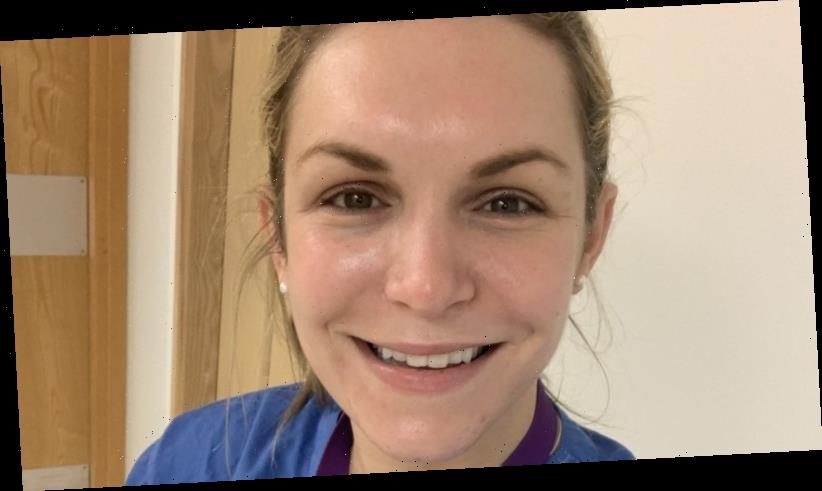 London: When Kerri Doggett felt hotter than usual one evening in April last year she dismissed it as an after-effect of her jog.

But when she lost her taste the next day, she knew that she’d caught coronavirus. It was perhaps inevitable given her job as a radiographer at one of London’s biggest hospitals, which was filled with COVID patients during Britain’s first wave of the pandemic. 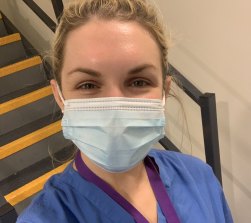 Kerri Doggett, 30, at the London hospital where she has worked for the last three years. She took this selfie just prior to being vaccinated.

Her case was only ever mild and nothing like the 36 hours of “feeling rotten” that she experienced after taking the first dose of the Pfizer/BioNTech vaccine on January 8.

“It came into effect that evening, I started feeling really tired,” the 30-year-old said.

“The next day I had a headache, complete fatigue and lethargy and chills and a bit of a tight chest which all lasted for about 36 hours, that whole weekend I was feeling rotten.”

The speed of the vaccine’s development has, understandably, given rise to what is dubbed “vaccine hesitancy” where people who take other vaccines and are not anti-vaxxers express concern about how rapidly the COVID vaccines are being rolled out.

Originally from Perth, Kerri is also a fitness instructor and wellness coach. She says she was one of those cautious about taking the vaccine, which Britain approved for emergency use in December. 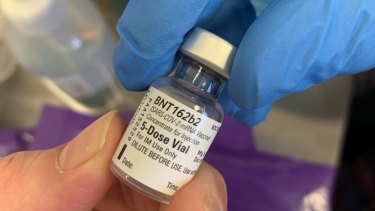 “I’m quite a natural person and I definitely like a vaccine to be out for a few years to know the side effects,” she said.

“So from that aspect, it was a bit nerve-wracking but by the same token I am a healthcare worker, it’s my job and that’s my responsibility and if it means that I can then stop someone else – who is perhaps more vulnerable or not in such a healthy state as I am – from getting it, then to me that’s worth it.”

She also expressed a “mental ease” that came with having had the jab and walking into a hospital crowded with COVID patients every other day.

“I’m not any more flippant with how I deal with patients or my PPE but it puts your mind at ease a little bit because you know that the best scientists of the world have come together to produce this and you expect it will protect you to some degree.

“So I’m grateful that I’ve had the opportunity to have it,” she said, speaking via telephone during her lunch break from another busy shift.

Kerri’s second jab will be March 19 – 10 weeks after her first. Britain, controversially, is extending the number of weeks between the first and second doses as it races to vaccinate enough of the population’s vulnerable and frontline workers before the NHS is overwhelmed, with its death toll having already exceeded 100,000.

She is one of around eight million people who have already had their first jab since the first vaccine was administered anywhere in the world – to the British grandmother Margaret Keenan – on December 8.

If Britain’s first chapter of the pandemic has been an unmitigated horror show, it’s second could be one of redemption; it is poised to become the first Western nation to vaccinate its vulnerable and aims to have offered everyone the jab by September. 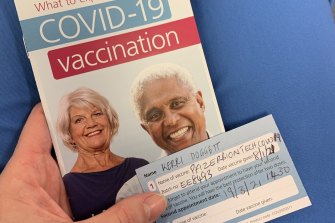 Kerri Doggett has received her first vaccination jab and has an appointment for her second.

On a per head basis, Britain is the world’s third-highest vaccinator. By contrast, Australia is yet to administer a single jab, but because it only needs to vaccinate the equivalent of a third of Britain’s population, the government is confident it will have vaccinated the population by October, one month later.

An added incentive to take the jab is what Kerri believes will soon become a requirement to have the vaccine to ever travel home – although that remains impossible for her right now because Australia’s border closures mean that her partner Tom, a Brit and also a healthcare worker, is not allowed into the country.

“Otherwise that would be definitely something I’d consider because it’s almost been a year since COVID started and I definitely feel like I’ve done as much as I can in terms of my profession – it is getting to the point now where it’s just persistent, it’s constant and people are really sick.”

One vaccine that Australia is unlikely to ever adopt is China’s Sinopharm, which is being rolled out at great speed in the United Arab Emirates.

Newsreader Noni Edwards, originally from Sydney, has had her first dose of that vaccine. 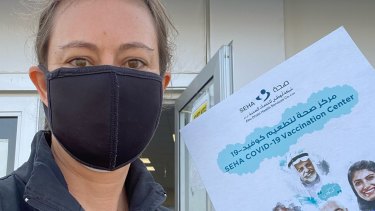 Noni Edwards from Sydney took the Sinopharm vaccine in Dubai, where she lives and works as a newsreader.

“I feel very fortunate to have access to it and I think it would be silly to turn it down,” she said of the Chinese-produced jab.

The 44-year-old qualified for the injection because the UAE has already vaccinated its priority groups. While she originally signed up for the Pfizer vaccine, she always preferred to take Sinopharm’s because it uses different technology to BioNTech’s.

“I kind of thought it would be a safer option even through the efficacy rate is lower,” she says.

“I do feel like as well as protecting myself, I’m protecting the people around me by taking the vaccine and I’m protecting others in the community and it’s not about whether or not I choose to travel to Australia in six months or 12 months’ time.”

Noni took her vaccine at the Dubai Parks and Resorts theme park, which has been converted into a vaccination centre, having served as a field hospital during the country’s most intense lockdown period. 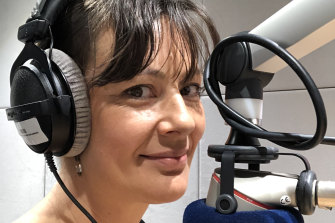 Noni Edwards reads out the UAE’s vaccination rollout on the news every evening.

She says the UAE’s rapid rollout is a huge source of national pride.

“Every evening on the news I read out what the vaccination rate, and it’s a must-run item,” she says. “More than one in four of the population has had a dose, which I think is phenomenal.”

But tiny Israel looks set to win the race of vaccinating its entire population first, partially because Benjamin Netanyahu has staked the March election, which he was poised to lose, on inoculating the population. He also signed one of the first deals with Pfizer, agreeing that the country would share data with Pfizer as part of the deal.

Ittay Flescher, 42 and originally from Melbourne, has already had both Pfizer jabs. He credits Israel’s success with the happy synergy of socialism and capitalism, and a cultural distaste for bureaucracy when jobs need doing.

He took advantage of an early scheme allowing Israelis who were not on the priority lists to line up for any surplus thawed doses that can’t be refrozen.

“In the last half hour someone came out literally with a megaphone and said ‘anyone else who’s still here we’ve got some leftovers come in and we’ll do it for you.’”

“Once you got in it was like a production line, it happens very, very quickly,” he said. “And it’s all automated.

“Literally a minute after I got my first shot I got an SMS to my phone setting my appointment for the second shot.” 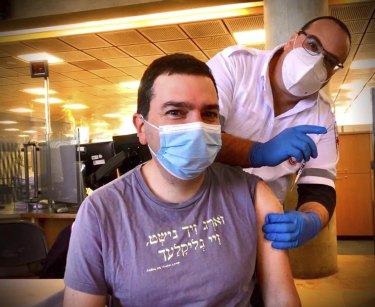 Ittay Flescher, 40, from Melbourne receiving the Pfizer vaccine in Israel.

Ittay’s only side effect was a sore arm for a day or two. “When we got it we were just so happy, it was just like this weight had been lifted off our shoulders, there was this sense of relief and a sense of living in a miracle,” he says.

“This pandemic started nine months ago and I’m one of the first people in the world and I feel very lucky and privileged to get it and hopefully now this is beginning the end.

“I’m not a fan of Netanyahu but sometimes someone does the right thing for the wrong reasons – that’s what’s happening.”

Like in the UAE, Israelis are proud of their inoculation success.

“I think the majority of Israelis do feel very proud that we’ve done this and we’ll probably do it first in the world,” he says.

“But there is also one issue with Palestinians not getting the vaccine and it doesn’t feel right to me that Israel is this wealthy country that has been able to give the vaccine so quickly to its citizens that we haven’t been able to help them in Gaza getting the ball rolling.

“I would hope that if we do end up having a lot of extra vaccines that we can share them with the Palestinians because I think that would make a symbol of peace because corona(virus) doesn’t care about your border and your nationality.”