The preliminary design of the new National Gallery of Victoria Contemporary building, the centrepiece of a $1.7 billion revamp of the Southbank arts and culture precinct, was unveiled on Tuesday.

Creative Industries Minister Danny Pearson described the gallery as Melbourne’s Eiffel Tower, predicting it would attract one million visitors from interstate and overseas annually once it opens to the public in 2028. 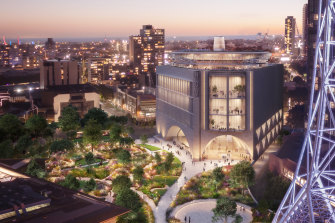 Render of winning concept design for NGV Contemporary by Angelo Candalepas and Associates.

“This is going to be an absolute game-changer, and it’s going to put us on the global stage as being a destination for the finest art in the world,” Mr Pearson said.

“This is going to be an absolute boon for our state, it’s going to be a magnet for tourists and showcase our credentials as the nation’s creative state.”

The gallery has been designed by architecture firm Angelo Candalepas and Associates and will feature arched entries, education spaces, science laboratories for art conservation, and a rooftop terrace with CBD views.

It will be nestled in public gardens larger than the playing surface of the MCG with retail and hospitality offerings, performance spaces and public art.

The government estimates the project will create more than 11,000 jobs during construction and hundreds of ongoing roles when it opens to the public.

Initial plans to build the gallery and redevelop the arts precinct to link the Arts Centre and NGV International on St Kilda Road to Sturt Street were unveiled in 2018.

In November 2020, the state government allocated $491 million towards the design and construction of the precinct.

The announcement followed an earlier funding commitment in 2018 to purchase the gallery site at 77 Southbank Boulevard, behind NGV International and opposite the ABC.

Mr Pearson said the design, which is still yet to be finalised, struck the right balance between creating an iconic building and overshadowing nearby spaces.

“It is breathtaking, and it will really capture, not only our collective imagination, but our imagination and Victoria’s imagination for decades to come,” he said.