Singapore: The first time Chinese textile executive Eric Zhou heard the power was going to be turned off was in mid-September.

Chinese authorities had become alarmed at the level of demand for power as the northern part of the country headed into winter. There was not enough coal to keep the Chinese economy humming. The coal that was coming in was so expensive that the power stations were operating at a loss to keep the lights on. They had to prioritise homes over businesses and infrastructure. 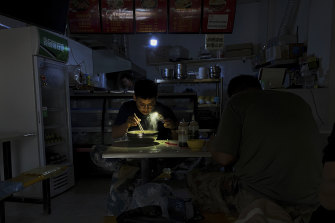 A man uses his smartphone to light up his breakfast during a blackout in Shenyang in north-eastern China.Credit:AP

Across the country, authorities reacted in different ways. In Liaoning province, a factory where the exhaust system suddenly stopped working had to send two dozen workers to hospital as they had suffered carbon monoxide poisoning. In Shenyang, they turned the highway and streetlights off, forcing cars to travel on one side of a busy highway in total darkness. In Shenzhen, the annual National Day light spectacular was called off.

“We were first told that electricity use would be limited from September 22 to 30 and all local factories were asked to stop production,” said Mr Zhou. “Power was actually cut for three days.”

By September 26, the companies in his city of Shaoxing were split into groups from A to D. High tech, low emissions, big taxpaying factories were put into group A were and told they were allowed to operate for eight days and stop for two. Those at the bottom of the pile – the low tech, high emissions, inefficient producers like steel, cement and chemical manufacturers in group D could operate for four days and stop for six.

Jenny Zhang, the director of sustainability for China at the Lantau Group in Shanghai, said the four groups were a sign of things to come. Zhang said while for now they were being used to distribute power, they would soon allow Chinese authorities to force the most inefficient, polluting, low-taxpaying businesses to shut down – by strangling their access to energy.

“They won’t operate any more, it will be force majeure,” she said.

Mr Zhou, whose Dingjia Textile company was not in one of the bottom groups, said the power shortages had forced his company and others in the city to become more energy conscious and turn off unnecessary lights or turning off air-conditioners in the office at night.

“We do have some concern about the future but not yet to the level of panic,” he said.

The power shortage, which has gripped the country for the past week, had been caused by a mix of state intervention, surging coal prices, supply shortages, a lack of renewable dispatchable power and, at the margins, China’s pursuit of a net-zero emissions policy. China’s Electricity Council has called it a “perfect storm” of factors.

Chinese state media has been eager to paint the crisis as a result of the energy regulator punishing provinces that had failed to meet their power consumption and power production efficiency targets.

This suits China’s global narrative as it heads into the UN climate change conference in Glasgow in November, a year after President Xi Jinping committed China to net zero by 2060. But the data reveals it is not emissions reduction that is driving the shutdowns, but emissions intensity.

China’s economy is gobbling up record levels of energy, and it does not have enough coal to power it.

The price of thermal coal futures contracts have grown by more than 135 per cent since the middle of last year. Spot prices at Chinese ports in Guangzhou and Qinhuangdao have reached highs that were unthinkable outside of the extreme cold snaps in the middle of the winter.

A Chinese official at the Bureau of Economic Operations Adjustment told the newsletter Pekinology last week: “Coal is still the main energy source in China at present, and plays an important and foundational role in the guarantee of national energy supply.”

In an attempt at putting a lid on prices, Chinese authorities approved 16 open cut coal mines in July and another 20 in August in the coal regions of Inner Mongolia, Shanxi and Shaanxi. National Bureau of Statistics figures show coal production was up 4 per cent in the first half of 2021, while electricity generations jumped 7.4 per cent. The Huatai Futures Research Institute said the scramble to find more coal had meant higher-quality and more expensive coking coal, usually reserved for making steel, had been diverted to power plants. Bloomberg reported on Friday that China was now also snapping up huge volumes from Indonesia of dirty lignite coal, one of the world’s most polluting and energy-inefficient fuels.

Chinese domestic coal production has failed to keep up with demand, and global shipping has been hit by COVID-19 and weather disruptions, all at the same time as Beijing has cut off its largest source of imports, Australia, over diplomatic and trade disputes.

“It has forced power plants to pay a premium for domestic coal. In a reversal of the usual relationship, domestic prices have since been higher than those in Australia despite domestic coal generally being lower quality.”

The shortage has helped send the price of Australian thermal coal flying from $70 a tonne in August 2020 to $220 a tonne in the other markets it exports to such as Japan and South Korea. China’s trade sanctions have harmed its own importers while delivering a $2 billion windfall to Australian coal exporters this financial year.

Xungpeng Shi and Muyi Yang from the University of Technology in Sydney said at current coal prices, Chinese power generators would not recover their variable costs.

“Accordingly, the economically rational decision is to stop producing [power],” they said.

In Liaoning province, where the factory workers were taken to hospital after a blackout caused carbon monoxide poisoning, the soaring prices have meant coal generators are running at just 50 per cent capacity.

“The grid companies have responded to complaints from customers by saying that they have no power to dispatch because demand is high and supply is tight,” said Ms Zhang and her colleague David Fishman at the Lantau Group in a research note. Supply is tight because coal generators all over the country are refusing to operate their plants at a loss.”

But this time, parts of the country have also started doing something different.

For the first time, some industrial users, particularly in the high-tech hubs of Guangdong and Hunan on China’s east coast, were asked to pay a 10 per cent tariff to keep power flowing to their factories.

“In the past, these higher costs would have been assumed by the generator or grid company, never by the power consumers,” said Ms Zhang, who called it a “watershed moment”.

“This is the first case we know of where power consumers in China were asked to accept higher power costs to keep their lights on.”

It is a blunt formula: Inefficient, high emissions companies are being squeezed out by power cuts, while high-growth companies such as Huawei that can afford to run 24/7 are being asked to pay for it.

Ms Zhang said as hard as the restrictions were for some companies and workers, the measures were the first signs of a structural energy transformation in the Chinese economy. If the Chinese government can see it through, businesses and the public will have to wear short-term pain for long-term gain.

Mr Shi said: “The PRC’s recent power crisis is likely to provide strong incentives for the country to further expedite the uptake of stable-cost clean energies, in order to reduce its exposure to coal price fluctuations as well reduce emissions.”

To get to the other side, China will have to rapidly escalate its investment in renewable energy. At the moment, it does not have enough renewable baseload dispatchable power to keep factories operating. The shortcomings in China’s renewable network were also exposed this year by poor weather conditions.

There was not enough rain this year to drive hydro in Yunnan or wind to turn turbines in Liaoning. In normal conditions, the wind fleet should be able to generate about 10 gigawatts of energy but last week, when it was most needed, it produced but a tiny fraction of that.

In Dunhuang, China’s first “super mirror power plant” is up and running. It uses 12,000 mirrors to concentrate sunlight on to a receiver at the top of a solar tower, which then heats molten salt. The $700 million plant is designed to generate 390 million kWh of power annually.

It is reducing carbon emissions by 350,000 metric tonnes per year, but that is barely a dent in China’s annual output of more than 10 billion tonnes. 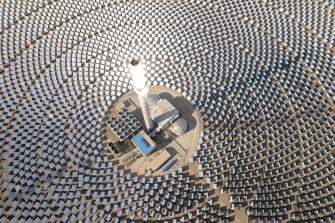 “Rather than building new coal capacity, existing coal capacity should also be better utilised to facilitate large-scale renewable uptake before its phase-out in the coming years. For example, with proper renovations, some of the existing coal-fired power plants can provide fast-responsive capacity to the power system. This is critical for maintaining system reliability while enabling large outputs from variable renewable sources.” 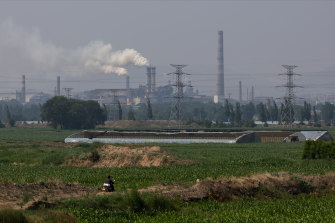 Those bearing the biggest burden of this transition are those in China’s north-eastern provinces. They are home to dozens of coal-fired power plants, but they have also been hardest hit by power restrictions. This is the only region where residential power consumption is also being curbed. They are saving their coal for heating in the winter, where average temperatures hit minus 15 degrees.

The Chinese official told Pekinology: “In the north-east, the weather is cold, the heating season is long. Residents have a high demand for heating, and concerns from society are high.”