Denpasar: Gambling on cockfighting, a brutal contest in which two birds claw each other to death, has been illegal in Indonesia since 1981. 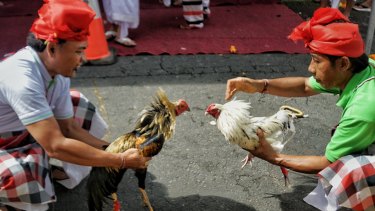 Tabuh Rah at a Hindu ritual at a temple ceremony in Ubud Gianyar, Bali.Credit:Amilia Rosa

For the Balinese, though, cockfighting is part of the ancient Hindu ritual called tabuh rah (the spreading of the blood) and it is still allowed for religious purposes.

Cockfighting has also evolved into a brutal sport on which large sums of money are gambled.

Gusti Ngurah Sudiana, the head of Bali's Hinduism Society, emphasises the religious significance of tabuh rah, which is an animal sacrifice supposed to appease the gods, pacify evil spirits and bring harmony to the world.

"Two roosters are pitted against each other outside the temple grounds armed with a taji [a small metal blade] attached to the bird's spur. [When the fight starts] blood is splattered as an offering on the temple grounds," he says. 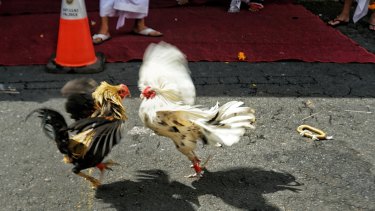 Crucially, when it is part of a religious ceremony, the cockfight stops after the first drop of blood is drawn – unlike in the illegal cockfighting contests that also take place on Bali, where the birds fight until either one is dead, or can no longer stand up.

These ceremonies also help raise money for local temples, Sudiana says, and no one gambles – it's forbidden in Hinduism.

Illegal cockfights are also common in Bali. I imagined a bunch of drunk men in a circle in a secluded empty lot, hidden from public view. 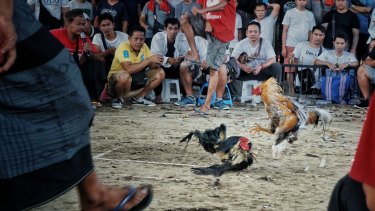 But I wanted to see first hand.

It's easy enough to find these events – one even had a Facebook page. Eventually I chose one of the biggest arenas in Denpasar, located only a few kilometres away from a Denpasar police station.

While technically illegal – these fights were about gambling, not religious ceremonies – the police only occasionally raid these venues, and often turn a blind eye.

The entry fee is $3.50 – another $5 gets you into the VIP area, ring side. It was hot and crowded, with hundreds of men shouting and cheering, but no one was drunk or even drinking alcohol.

I was about to see my first cockfight, and I was intrigued – but I was also bracing myself for the bloody scene.

Nyoman, a tourist guide who sat next to me, explained how it all worked.

The owner of the arena receives a 20 per cent cut from the main bets, which are laid by the owners of the two roosters, and also collects the entrance fees.

Tens of thousands of dollars in side bets are placed by the crowd. No cut is taken, there is no limit on how much is gambled and there are no rules. The side bets are where the really big money is gambled.

"Once you have picked a rooster, you shout the odds and show how much you want to bet with your fingers. Gasal means five against four, my five fingers means $50 or you can simply wave your money [to show how much you are wagering]. Then I look around for someone who will accept my bet," he says.

Like boxing, there is a referee, an MC and a man who bangs a small gong to mark the start and finish.

Finally, the fight begins. Seeing the roosters attack each other, horrified me. If the birds try to break free they are captured and put back in the ring.

The goal was clear: one had to stay down, dead or dying. There's no running away. So long as they are able to stand the fight continues.

It may play out in a sporting arena, but in no way is tajen a sport – unlike the Hindu ritual of tabuh rah, it's just plain animal cruelty, funded and motivated by gambling.

I asked Nyoman if he felt bad for the roosters.

"We don't waste the meat, the meat is for sale after they die, it tastes better, so it sells for double compared to the normal market price. Why would we feel bad?"

It was almost 3pm by the time I left the arena.

I asked Ketut how he was doing. He stared gloomily towards the stage and his friend answered me instead.

So much for his claim for de-stressing, I guess it only works when one wins.

As I concluded my research, I thought of the real losers of the contests, the birds.

Most of the winning roosters end up dead, too, from their injuries.