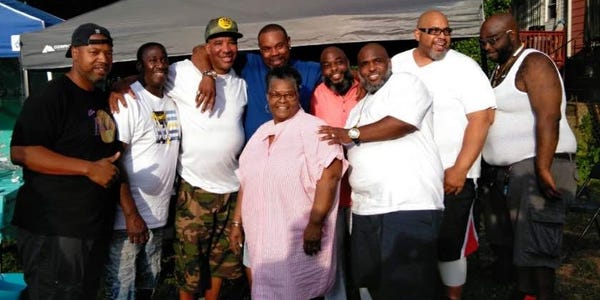 By the time Barbara Harris Griffin received the results from her June 2 coronavirus test, she was already lying in a hospital bed with severe COVID-19 symptoms.

Roughly four weeks had passed since she took the test, and the results were long past the point of being useful.

The 67-year-old Baltimore woman died on July 16. She was a mother of 12 who was best known for her kind-hearted nature and love of children, her daughter Kameka Parker told Insider.

Griffin was widely respected as a mentor and role model for both her own children and others throughout the neighborhood. Her home was "always open to anyone who needed help," her obituary read.

"My mom was our world, and she was the best and [most] loving person anyone could have ever met," Parker told Insider.

As the weeks throughout June and early July passed, Parker grew concerned about her mother's health, and eventually urged her to get checked out at the hospital.

Griffin told her, "I don't want to go, because I already know they're going to end up keeping me."

But Griffin went, nevertheless. That's when her illness took a turn for the worse, Parker said.

First, she wasn't getting enough oxygen. Then, her carbon dioxide took a hit. After that, doctors grew concerned about her kidneys. They placed her on a ventilator.

"It just seemed like every day it was just something going downhill," Parker said.

Several days after Griffin was intubated, her heart stopped.

As a senior citizen and a patient with underlying health conditions, Griffin was already among those in the population most vulnerable to coronavirus complications.

But Parker said the weeks-long delay in getting her initial test results back didn't help her mother's chances.

Perhaps if that initial test had delivered timely results, Griffin would have sought treatment sooner, her daughter said.

Since the early months of the pandemic, coronavirus testing has become much more accessible to Americans across the country. But delays in receiving those test results still persist for many Americans — as they did for Griffin.

One Wisconsin man told Insider he took a COVID-19 test in Milwaukee, but then received three different answers from three different government employees in the two-week period after the test was taken. The debacle resulted in confusion over when he could return to work, and whether his results were even accurate.

For Griffin, the weeks she spent waiting for test results could have been a valuable opportunity to seek treatment, Parker said. Instead, by the time Griffin arrived in the hospital, it may have been too late.

Griffin's hospital experience itself was troubling to Parker, who said it seemed like the hospital didn't have enough personal protective equipment, and that the doctors and staff seemed constantly exhausted and fearful.

"You can hear it in the voices of the people when you talk to them," Parker said. "It just seems like there's a lot of healthcare providers who are just frustrated and afraid themselves."

Parker said ultimately, Griffin's experience with COVID-19 was a nightmare — from the initial delayed test, to the hospital stay, to the medical bills her family will now have to pay out-of pocket.

"It ripped my family into pieces," she said.

Have you had a frustrating or unique experience with getting a COVID-19 test in the US? Contact this reporter at mmark@businessinsider.com.