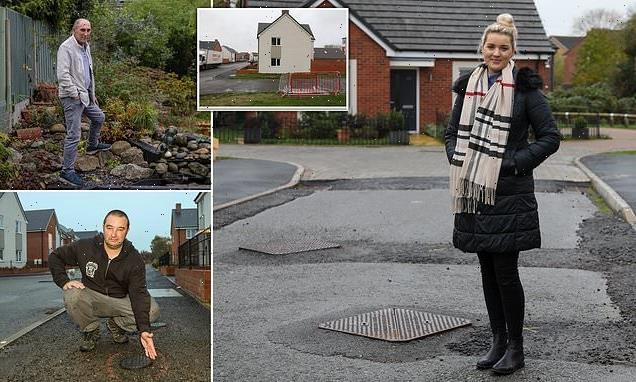 Residents in £450,000 new-build homes are ‘injured by potholes and targeted by thieves’ because street lights have not been switched on in three YEARS on ‘shoddy estate’

Furious residents have blasted developers who have left a multi-million pound new housing estate looking like ‘a pile of rubble’ years after people first moved in.

Homeowners began moving into the 120-home Weogoran Park development in Worcester three years ago, paying up to £450,000 for their brand new properties.

But the estate has been besieged with problems ever since due to uncompleted work which has left people feeling like they are ‘living in the Third World.’

Street lights have still not yet been switched on – leading to a spate of break-ins and locals fearing for their safety.

Unfinished roads and crumbling pavements have also led to trip hazards and people falling over and being badly injured.

Massive potholes also line the streets, while drains overflow whenever it rains due to a ‘shoddy’ sewerage and draining system.

Residents have now spoke of their fury that ‘nightmare’ developers St Modwen Homes have still not finished the work several years after building originally began. 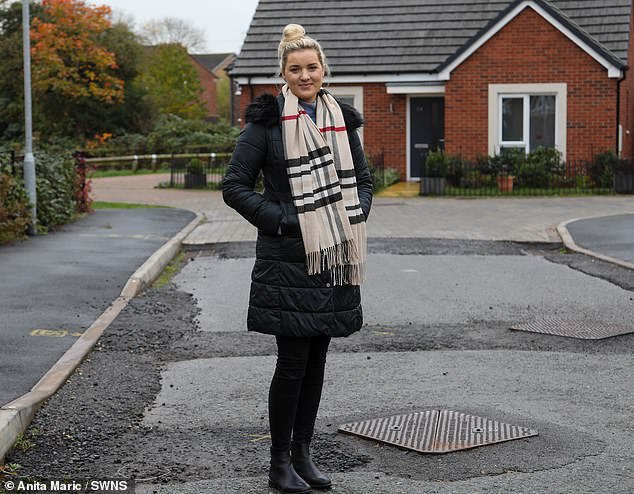 Homeowners began moving into the 120-home Weogoran Park development in Worcester three years ago, paying up to £450,000 for their new-build properties. Pictured: Vidmante Norvaisaite poses next to potholes on the estate

Kelly Spencer, 33, a full-time carer, said: ‘It’s been horrific from the moment we moved in two years ago.

‘The roads are all crumbling, there’s massive holes in the streets, the kerbs are coming away from the pavement and it doesn’t look like a newbuild estate at all.

‘At night, the area outside my house is in complete darkness and its unsafe.. There are cones where street lights should be.

‘I’m extremely close to moving out because it’s dangerous. You can’t see where you are going and then there’s trip hazards everywhere.

‘Then when it rains drains overflow and flood the pavements which become extremely slippery.

‘It is damaging cars and my dad has almost come off his scooter. If they don’t fix it by the winter months then the problem is only going to get worse.

‘The developers St Modwen’s are too busy just building more houses rather than sorting out the problems here.’

Another resident, who did want to be named, added: ‘This is supposed to be a posh new estate and it just looks like we’re living in almost Third World conditions.

‘They have just left the place looking like a pile of rubble. 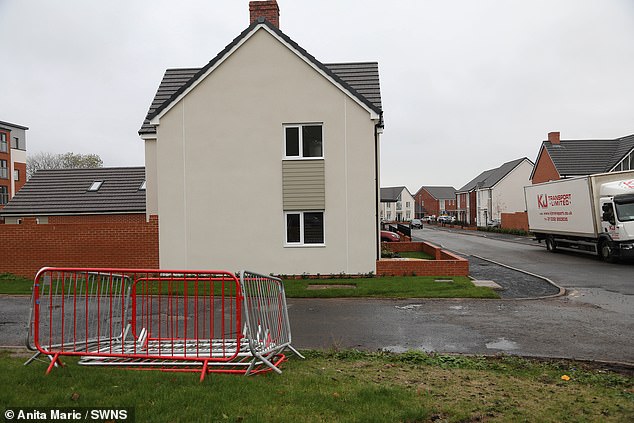 An unfinished pavement at Weogoran Park housing estate in Worcester. Homes sell for upwards of £450,000 here

‘I know some people have signed non disclosure agreements about problems with their own homes as well, so the issue is not confined to outside.

‘Instead we’ve got a shoddy sewerage and drainage system, death-trap roads and pavements and we are living in complete darkness at night.’

Developers St Modwen Homes claim the work has already begun to rectify the problems and could be completed by Christmas.

One man said he successfully sued the developers last year after he fell over a raised drainage cover in the dark and injured his back.

Daniel Deane, 46, a network controller for a logistics company, who paid nearly half a million for his home in 2018, said: ‘I had been walking home with my wife at the time.

‘Because it was completely dark I didn’t see a raised drain cover and went flying about 6ft and injured my back.

‘It could have been £50 for all I cared I just wanted them to know they couldn’t get away with it but yet still nothing has been done in about three years.

‘It could have been a pensioner falling over and even afterwards they just left it without any warning signs.

‘Whenever there is an accident surely they are obliged to put come barriers, cones or signs around it telling people of the trip hazard.

‘As a result of the lack of lights there was a spate of break-ins as well so we bought a Rottweiler just to use as a deterrent as we didn’t feel safe here.

‘We will never buy a newbuild house ever again.’ 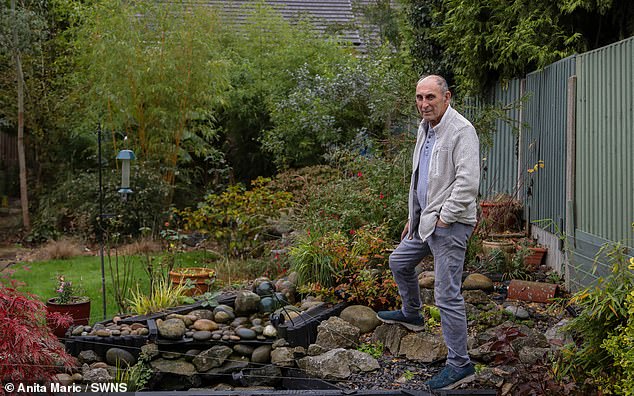 Father-of-one Rana Fakhar, 30, a doctor, said he had also experienced issues inside his house as well as the roads and pavements outside.

He added: ‘The houses are not cheap and I don’t feel like we have got what we paid for at all.

‘We have a one-and-a-half year old toddler who simply cannot walk outside because the pavements are so dangerous.

‘At night the area is in pitch blackness and I also had some issues with inside with the carpets and water gathering around the sink.

‘The estate is just not up to standard at all and they keep saying they will sort the problem and then they simply don’t do it.’ 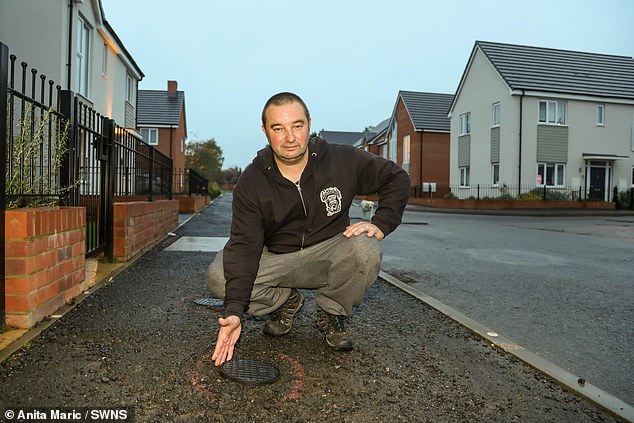 Daniel Deane, 46, resident of Weogoran Park standing next to a manhole on an un-finished pavment at Weogoran Park housing estate in Worcester

Retired councillor Keith Burton, 79, whose house backs onto the development, added: ‘There’s been problems with this development from the start.

‘When it was built they put the boundary right next to my back fence but I didn’t have the money to fight them in court.

‘I’m a member of the Local Residents Association and heard of nothing but problems to do with the roads and sewerage.

‘The sewerage backed up and overflowed into one person’s garden at the beginning and I still don’t think that’s been put right.

‘They have been the developers from hell. It has just been a nightmare for two years.’

Another resident said: ‘Every time it rains the water flows down the road and gathers at the bottom.

‘We have lived here 18 months, there have been broken promises when it will be finished. You just end up getting used to, but it isn’t right.

‘The footpaths outside mine were done 18 months ago. I thought finally they would then tarmac the road, but they didn’t.

‘It is disgusting it has been left in that state.’

A spokesperson for St Modwen Homes said: ‘We have already been in dialogue with residents regarding completion of the road works at the first phase of Weogoran Park in order to give notice that said works were commencing, and have commenced, on 9th November 2021.

‘The scope of works was agreed with Worcestershire County Council in October following the completion of the neighbouring care facility in August.

‘The works will be completed over a 12-week period. Works include kerb replacements and footpath tarmac repairs, final road surfacing, street signage and lighting.’