LOS ANGELES — California is nowhere near done with the recent string of storms that have killed at least 17 people since last month, driven thousands from their homes and submerged roads and communities under flood waters.

After a brief Tuesday night respite, the next storm is expected to arrive Wednesday in Northern California and also impact the Pacific Northwest. Another system is projected to hit Saturday and Sunday.

4 more atmospheric rivers are on their way to California over the next 10 days.

“The endless stream of atmospheric river events will re-focus on Wednesday across northern California,” the National Weather Service said. “Once again, heavy to excessive rain on already saturated ground may produce more flooding.”

“We expect these storms to continue at least through the 18th of this month,” Newsom said. “The magnitude of this is not isolated in smaller communities. It is scaled across the largest state in our union.”

►The pedestrian passageway in Los Angeles’ Union Station flooded because of the downpours of the last two days, prompting workers to shuttle some of the passengers on golf carts.

►Wind gusts approaching 70 mph forced flight delays at San Francisco International Airport. Storm debris on the tracks delayed commuter trains, and fallen trees and branches snarled traffic around the city. Many residents were jolted from their sleep around 2 a.m. by a raucous electrical storm.

►Rescue workers were trying to evacuate more than 15 residents of a neighborhood in Studio City, 12 miles northwest of downtown Los Angeles, where flooding and a mudslide submerged about 10 cars in water and debris.

►In Montecito, Ellen DeGeneres posted video on Instagram of flooding near her home. She said she and her wife, actress Portia de Rossi, were told to shelter in place because they are on high ground. “This is crazy,” said DeGeneres, who was wearing a hoodie and raincoat. Evacuation orders issued Monday were lifted Tuesday.

ARE CALIFORNIA STORMS NORMAL?: Are California’s storms normal, or is climate change making them worse? What experts say. 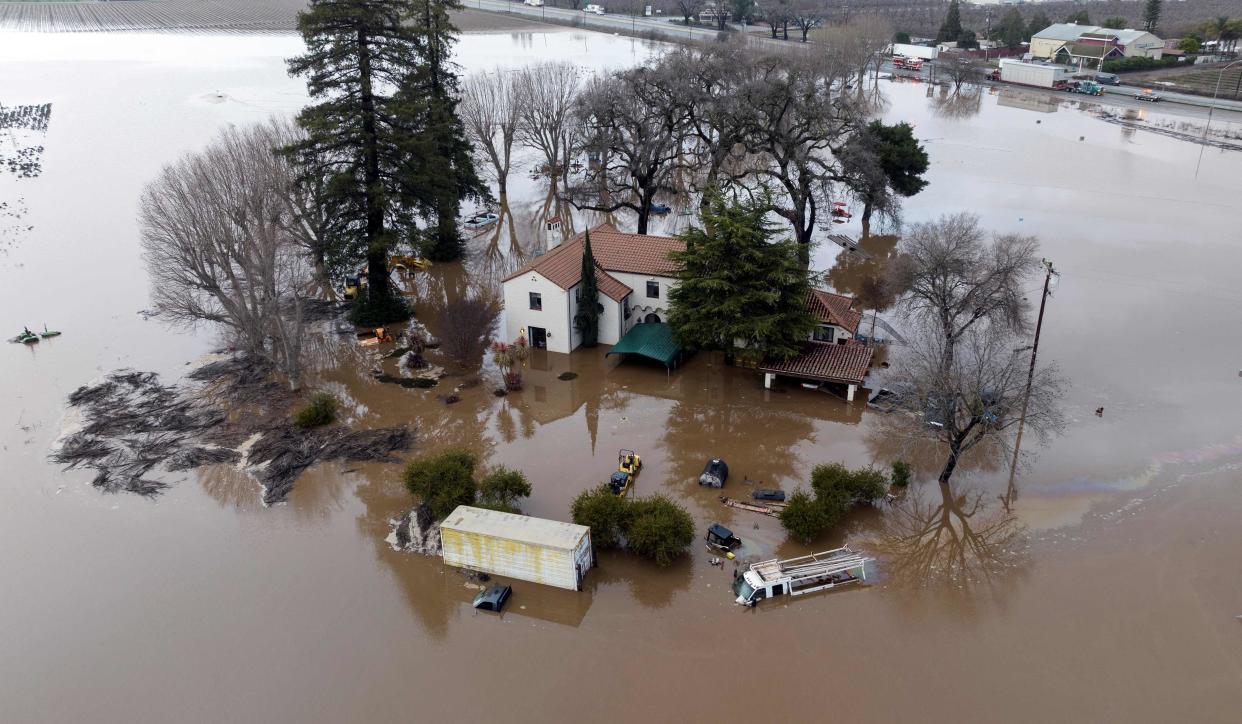 Raging waters overflowed the banks of Bear Creek, flooding parts of the city of Merced and neighboring flooding Planada, a small agricultural community along a highway that leads to Yosemite National Park.

The community of Planada, a town of more than 4,000 people, was evacuated Tuesday morning after water kept rising Monday night causing streets to flood and submerge vehicles.

Sandbags had been placed in areas prone to flooding to hold water back by city crews, according to Merced County Sheriff Vern Warnke. In an update Tuesday, Warnke emphasized the seriousness of the situation and urged residents to evacuate.

“If you see that I’ve asked for an evacuation, please do so,” Warnke said.

While a bulk of the heavy rain exited the Los Angeles region by Tuesday afternoon, according to the weather service, several inches of rain were reported in most areas.

Over higher terrain in the Ventura and Santa Barbara counties, upwards of 18 inches of rain was recorded, the weather service said Tuesday. The relentless heavy rain swamped roads with mud, debris, and floodwaters.

Sinkholes swallowed up two cars on a Los Angeles street, trapping two motorists who were rescued, and damaged 15 homes in the rural Santa Barbara County community of Orcutt, authorities said.

Multiple roadways were also closed because of flooding, rock slides, and debris flows.

In Studio City, a neighborhood in Los Angeles County, the fire department had to evacuate 17 residents who were sheltering in place on Tuesday. According to the Los Angeles Fire Department, 3 to 5 feet of mud had piled in the area.

In San Francisco, the ground ‘can’t take any more rain’

In San Francisco, more than 1,000 trees have fallen since New Year’s Eve, including at least 15 since Monday night, said Rachel Gordon, spokeswoman for the Department of Public Works.

A fully grown black acacia tree fell in the wind early Tuesday in the Lower Pacific Heights neighborhood, crushing a Subaru parked nearby. Crews on the scene began cutting the tree and feeding it into a chipper later in the day.

“The ground is just saturated. It can’t take any more rain,’’ public works arborist Drew Landers said. “The slightest breeze can knock these trees down. This one was just so heavy and wet, it fell over.’’ 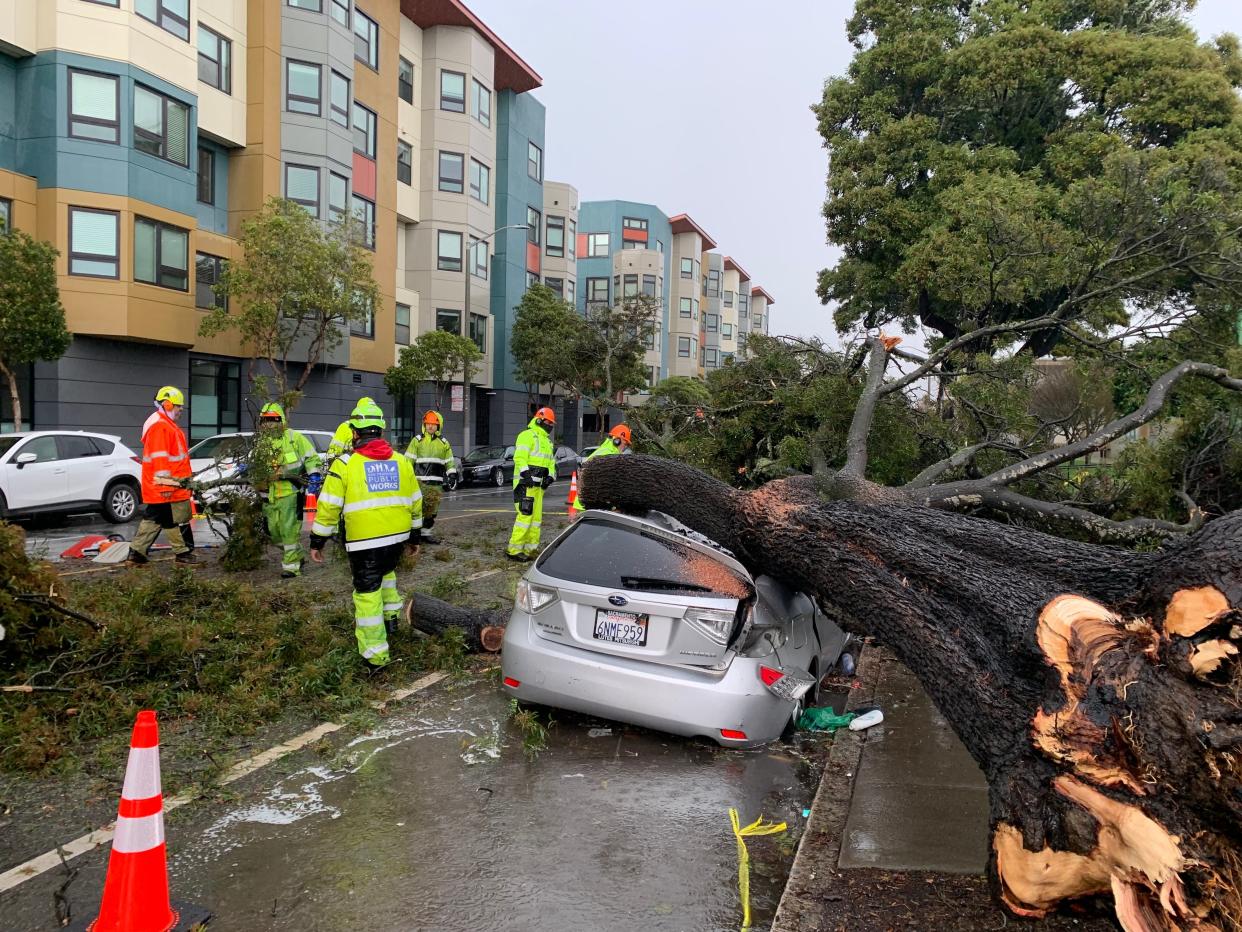 Two more storms were expected to pound California in the next several days, increasing concerns about mudslides, flooding and falling trees on saturated terrain. Then there are the mounting piles of snow.

The National Weather Service predicted 10 to 20 inches of snow for the greater Lake Tahoe area through Tuesday evening, and the numbers would rise to 18 to 36 inches above 7,000 feet. The service warned against traveling in the area, telling motorists, “You could be stuck in your vehicle for many hours.”

Miles of Sierra Nevada highways were subject to chain requirements and closures because of whiteout conditions. The Eastern Sierra’s Mammoth Mountain ski resort reported 4½ to 5½ feet of snow, and more was expected.

Rain turns into snow at higher elevations, and in normal times its accumulation in the mountains serves as natural water storage for the state. Rivers and creeks are nourished by the melting of snow in the spring, and this snow season was projected to be significant after years of underwhelming totals.

The flip side, however, is huge amounts of snow create hazards that include fallen branches and trees and blocked roads. Accuweather warned that “the fluctuation of rain and snow could bring an increased avalanche danger as well.”

The “one good aspect” of the heavy rains has been relief from the persistent drought that has been plaguing a wide swath of the West, the weather service said. Nearly all of California has seen rainfall totals 4 to 6 times above average over the past several weeks. And much of California into the Great Basin has seen one to two “drought class” improvements over the past month.

Reservoir levels across California are responding – reservoirs are now above their historical average levels, and water levels are increasing rapidly, the weather service said.

But it’s far from a perfect storm, the National Drought Mitigation Center noted in a tweet: “The wild weather in California this week reflects one of the biggest barriers to #drought recovery. If soils are saturated, water can’t soak in properly to replenish groundwater supplies. On the flip side, if soils are too dry, they can’t efficiently absorb water either.”

Flood watches, mudslide concerns for San Francisco and beyond

The weather service issued a flood watch for the entire San Francisco Bay Area, the Sacramento Valley and Monterey Bay. Areas hit by wildfires in recent years faced the possibility of mud and debris sliding off denuded hillsides that have yet to fully recover their protective layer of vegetation. The storm was expected to bring enough rain to exacerbate flooding and heighten the risk of mudslides, forecasters said.

Some residents fled, and many sheltered in place.

“Check on friends and family who may need assistance … especially the elderly, homebound, or neighbors with disabilities,” the San Francisco Department of Emergency Management urged. 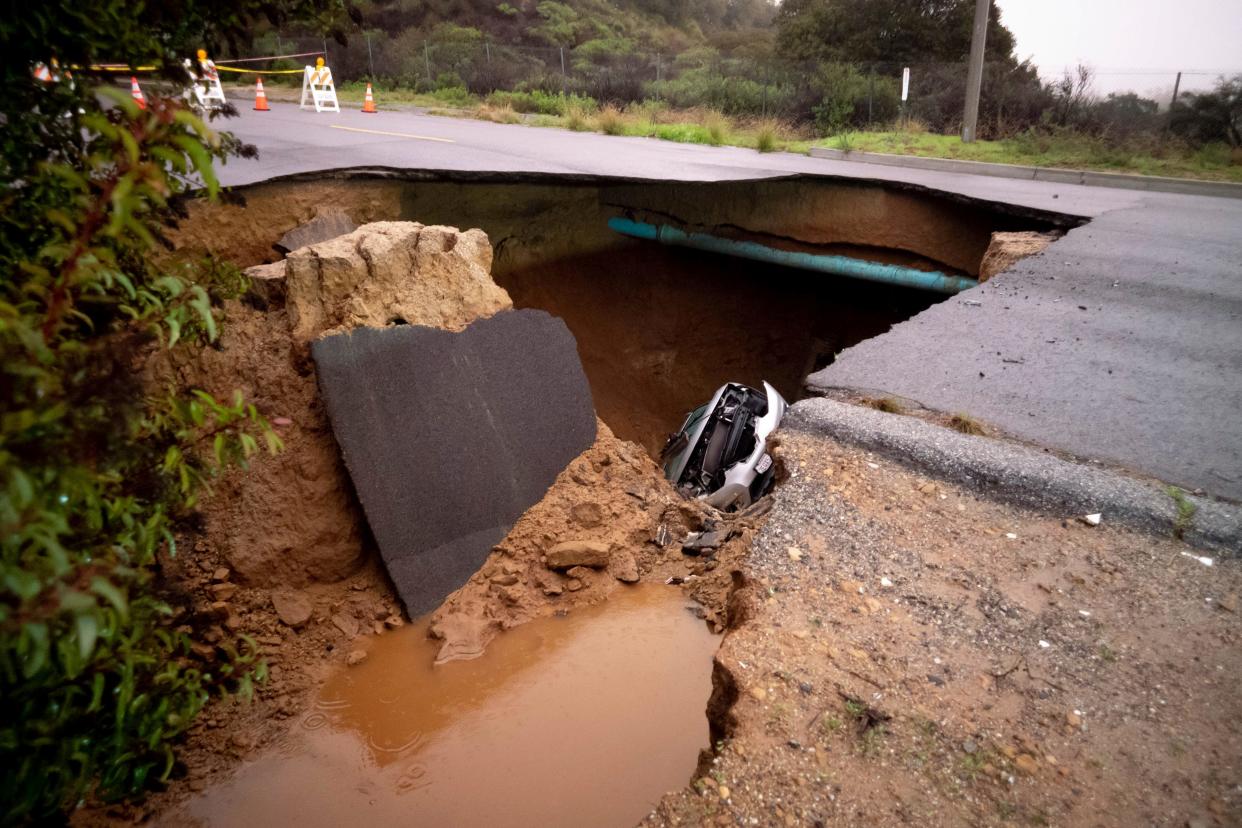 Vehicles were seen submerged in water in some parts of Los Angeles. And a sinkhole swallowed two vehicles in the Chatsworth area in northeast Los Angeles late Monday. Authorities said two people escaped on their own, and firefighters used ropes and an aerial ladder to rescue two others who had minor injuries.

#Chatsworth; Two cars into a sinkhole with one on top of the other. @LAFD rescued two people trapped. pic.twitter.com/K8c4UGS6Ro

California storms: Climate change or something else?

California could face a “parade of storms” over the next several weeks, on top of recent deluges that have killed at least 14 people, triggered flooding, knocked out power and forced evacuations and school closures up and down the coast. Although wet winters and dry summers are a natural part of California’s weather patterns going back millennia, the question arises: Are this year’s storms something out of the ordinary?

Weather patterns over hundreds of years show periods of severe drought and periods of extreme wetness in the state. The last few years have been severe drought. The wetness over the last two weeks has been extreme.

“We have in recent years become accustomed to quite dry conditions and a lot of winters that didn’t feel much like winter in a lot of California past decade or so,” said Daniel Swain, a climate scientist at the University of California, Los Angeles. “And that is both unusual, but also typical in the longer context.” Read more here.