The question of who should cough up the cash for the 45 per cent increase in the tunnel's price tag has not been resolved in a three-way dispute between the Andrews government, Transurban and the project’s joint building venture John Holland and CPB Contractors. 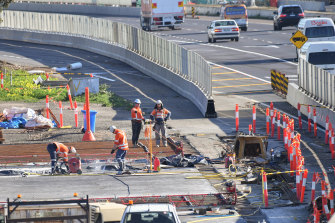 West Gate Tunnel works: over budget and behind scheduleCredit:Joe Armao

This is the second significant surge in the cost of this flagship toll road, which was first announced in 2015 with an initial price of $5.5 billion, and promoted as the best way to relieve congestion on the West Gate Bridge.

But Treasury’s advice to cabinet suggests the project's costs could increase even further, as Transurban makes an additional claim in the wake of the COVID-19 pandemic on the toll road linking the West Gate Freeway in Spotswood and CityLink at Docklands.

Tunnelling on the project was supposed to start in September last year, but Transurban and its subcontractors are locked in a legal dispute over blowouts of more than $2 billion caused by an impasse over contaminated soil disposal and about $1 billion linked to the challenges of relocating pipes for major utilities. The project faces a 10-month delay, the internal documents warn.

Gas, water, sewerage pipes and electricity cables must be moved to make way for major projects within 30 days, under the state’s Major Transport Projects Facilitation Act.

But The Age understands the utility companies were not complying with the West Gate Tunnel builders' relocation requests, as they had not been formally notified about the project’s special status under the act. The government was required to do this under the terms of the project's contract, which then triggers a negotiation period.

This error led to months-long delays and cost overruns which the builders are now pursuing in arbitration with Transurban, which is trying to pass on the cost to the taxpayer.

This follows more than $2 billion in cost blowouts linked to the discovery and relocation of soil contaminated with PFAS, which cabinet documents predict will push out the construction timeline by nearly a year.

There is no landfill space in Victoria for the project's 3 million tonnes of contaminated soil — a problem the project's builders discovered midway through 2019, after contracts were signed.

The builder’s lawyers accused Transurban of “misleading or deceptive conduct” in documents lodged in the Supreme Court, saying they would not have signed the $5 billion construction contract had they been properly informed about the contamination.

Chambers Westgarth lawyer Andrew Stephenson cited reports prepared by Transurban’s consultants Golder Associates in 2016, which predicted that 85 per cent of the project’s soil was not contaminated.

This was backed by the project’s Environmental Effects Statement, which also concluded there was sufficient landfill capacity for the waste.

In June 2019 after contracts were signed, the builders' own modelling found low levels of PFAS in most of the project’s soil.

On July 23 last year, the EPA refused to provide soil classifications, saying the waste was not 'clean fill' and there was no landfill space to dump it.

All of the soil required testing before sending it to landfill and this could not be done in the 48-hour period available at the existing storage facility at Whitehall Street, Yarraville.

By the end of July, the builders tried to rip up the contract, saying they faced a force majeure event as tunnelling could not start until a landfill site would be licensed to take the soil.

A government spokesman said no claims have been accepted by the state and the government would hold Transurban to the terms of their fixed price contract.

"The best thing that CPB, John Holland and Transurban can do to avoid losing money on this job is to resolve their disputes and start tunnelling as soon as possible."

A Transurban spokeswoman said it was not also not accepting any of the builder's claims.

"Like on any major project, there are ways the builder can put forward claims on disputed matters."

A West Gate Tunnel Project spokeswoman said it was "not unusual for contractors to put forward claims to advance their commercial position".

She said work on the project were happening "around the clock with a major stage of widening the West Gate Freeway from 8 to 12 lanes almost complete".