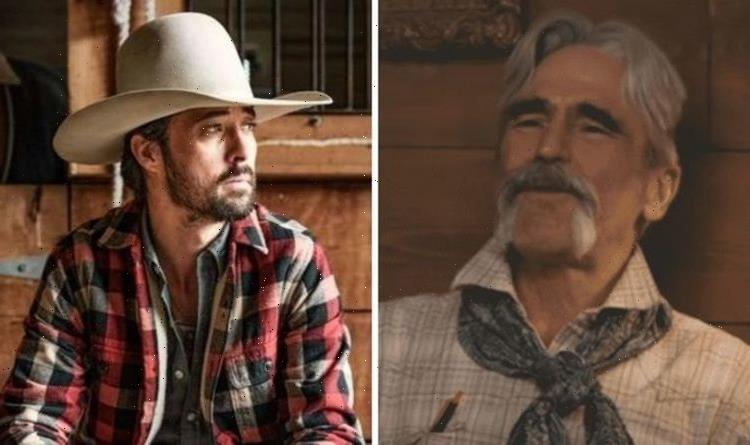 This month saw the highly-anticipated return of Yellowstone as its fourth instalment premiered on Paramount Network. As well as the drama’s with the Dutton family, viewers watched tensions rise between Lloyd (played by Forrie J Smith) and Walker (Ryan Bingham). Away from the screens, Lloyd star opened up on why he struggles to fight Walker during their huge fight.

During the episode titled ‘Winning or Learning,’ fans watched in shock as weeks of tension eventually resulted in a fistfight.

As the oldest ranch hand, Lloyd was left beaten up at the hands of Walker after frustrations got intense and a fight broke out at the ranch.

In a behind the scenes interview, actor Forrie discussed the fight scene and explained why it was hard for him to take part.

He revealed: “I really had no anger towards Ryan Bingham, I love the guy and there were times I had to envision him as something else, to be able to put that anger towards him.

In the episode, it all kicked off when Lloyd, Walker and the other ranch hands were herding the cattle for doctoring.

Although the herd had pink eye, which risked the health of the other animals of the Ranch, Lloyd insisted on taking the animal to the arena to make doctoring easier.

Walker publicly disagreed, suggested they should do it where they were to avoid putting the other animals at risk.

After telling him and those who agreed with him to “shut up,” Walked asked: “Who made you boss, when boss is gone?”

Although they were able to do their job, it kicked off at night when all the ranch hands were at the bunkhouse.

This caused Lloyd to launch at Walker with a kick to the stomach which resulted in the two fighting each other while the group attempted to separate them.

Much to everyone’s surprise, the brawl got so brutal Walker was even flung across the table.

Lloyd suddenly kicked Walker in the stomach as the two started throwing punches at each other with the group trying to stop them.

The argument got quite out of hand with Walker being flung across the table. Rip (Cole Hauser) who heard the commotion comes in and stops the brawl punching Lloyd in the gut.

He warns him saying if he wants to fight someone, fight him. Reminding Lloyd of the rule of no fighting on the ranch, Rip leaves the group as the men look on in anger.

However, viewers know the root of their feud began with the arrival of Laramie (Hassie Harrison) at the ranch.

In the interview, Jake Ream who played Jake even laughed as he said: “You put one girl in a bunkhouse there’s going to be a fight.”

Essentially both Lloyd and Walker were in a love triangle with Laramie as they battled for her affection.

As their rivalry finally came to a head, many fans wondered if this would be the reason for Lloyd’s exit from Yellowstone.

Even though he is a vital member of the Ranch family and has worked for the Dutton family for many years Lloyd was also the oldest.

One fan even suggested the punch he received from Rip could potentially cause some internal damage, which could be the reason for his potential departure.