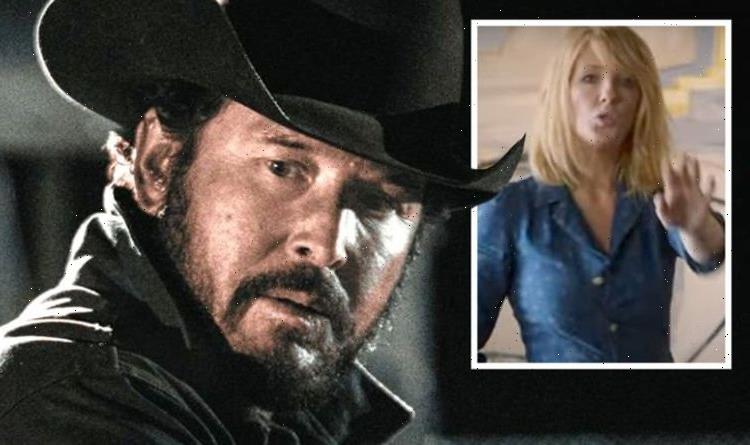 Yellowstone season four will be airing on The Paramount Network this weekend and viewers are in desperate need of answers. The season three finale left the Dutton family’s lives in the air after they were targeted by anonymous killers. Cole Hauser, who plays Rip Wheeler in the series, has issued a stark warning suggesting Beth (played by Kelly Reilly) could be dead.

Yellowstone season four is expected to be the most explosive series yet as it attempts to uncover the anonymous assassins.

Beth Dutton was caught up in a bomb attack at her office and many fans were certain she would not pull through.

Since the season three finale, questions have been raised as to whether she will make an appearance in season four.

Her love interest Rip has already warned people will face his wrath in the upcoming instalments, which is a worrying sign.

But a new video, including a short interview with actor Hauser, has seemingly confirmed Beth’s ultimate fate.

Jamie Dutton actor Wes Bentley says: “Where we pick up is right where we left off. The action of the scene is in real-time.

“They have amassed quite a list of enemies. It could be one involved in Broken Rock, it could be big money players…or it could be someone right in their own living room.”

One of the show’s creators, Taylor Sheridan, adds: “It was a devastating attack against the family. So we have got to figure out who is left to look into it, and that’s my goal.”

Fans instantly turn to Rip Wheeler as it has been suggested he will be the one to hunt down the Dutton killers.

Hauser is finally heard confirming: “Everybody is gonna get f****d up.”

With this in mind, it is believed Beth may die either at the start or part way through the fourth season.

Viewers believe she will need to die in order for Rip’s journey of vengeance to begin.

Taking to the comments on the official Yellowstone Instagram account, janettemillerjohnson said: “Rop will take the whole town to the train station.”

Teri_tlc added: “No storytelling or teasers from Rip. He’s just direct and just tells it like it is.”

Jahna.lewis said: “I have a feeling Beth isn’t coming back.”

In the video, John Dutton (Kevin Costner) is heard talking about how hard it can be losing someone you love.

Some fans believe this is foreshadowing Beth’s demise in the upcoming season.

Imtmw said: “That voice over about finding someone you love and then losing them made me think that Beth isn’t coming back.

“But that may be to obvious and they just want us to think that. Can’t wait for season 4.” [Sic]

There are still viewers who believe Beth will not be killed off as she is one of the fan-favourite characters of the series.

Bonniesimmons3 said: “They can’t get rid of a character like Beth. She is a true bad a**!

“I just think she will have a memory loss and not remember Rip.” The most recent post on the Instagram account is of John and Beth together.

The caption reads: “Will Beth and John survive the attacks against them?” Some fans have gone as far as threatening to boycott the series if Beth dies.

Lifeoncrosscutway answered: “Yes bc there is no Yellowstone without them.” [Sic] Meanwhile cl_1938 said: “If Beth is out, I’m out!”

Neutralno2 concluded: “John will survive. Beth will probably be in critical condition, which will have Rip unleash on whoever’s responsible like a freight train.”

Yellowstone season 4 airs on The Paramount Network on November 7.