Do we need another Sherlock Holmes? The most filmed character in cinema history, beginning with a minute-long biograph in 1900 and ending – at least until now – with Benedict Cumberbatch's modernised Sherlock with Martin Freeman as his troublesome offsider Dr Watson, has been through so many permutations, adaptations and spin-offs that he might reasonably considered ripe for a return to the Reichenbach Falls.

But no: Sherlock Holmes, with his eccentricities, louche drug habit and inscrutable friendship with Dr Watson is seemingly inexhaustible. 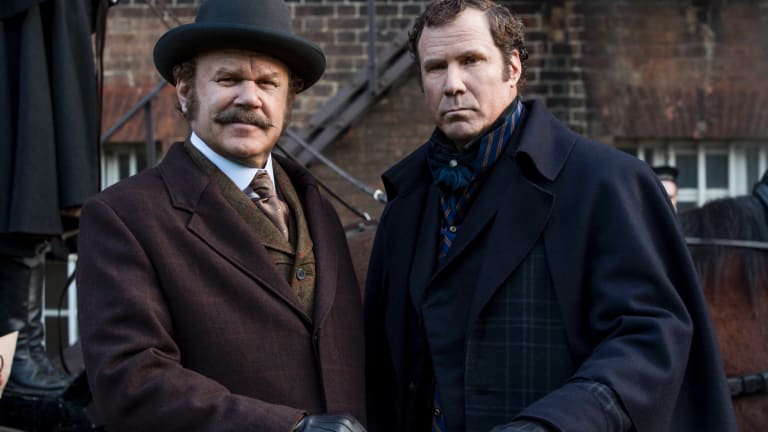 It will be the first of many, thanks to the machinations of the evil Professor Moriarty who is played, almost inevitably, by Ralph Fiennes. Hampton Court's magnificent garden is the setting for an Anglo-American exhibition where, it is hinted, the so-called "special relationship" will be disrupted by some sort of nefarious crime. In the way of set visits, we are not allowed to know what that is.

In fact, we still don't. Nearly two years after that garden party and two weeks before the film's Boxing Day release, the press still hasn't seen it. Online trailers feature plenty of prat-falls, a shoot-out with a swarm of killer bees and Queen Victoria (Pam Ferris) getting knocked out by a camera the size of an armchair: it's a spoof, they say, along the lines of Young Frankenstein. With any luck, the final film will also include plenty of the banter that make Ferrell and Reilly fun to be around, on and off screen. 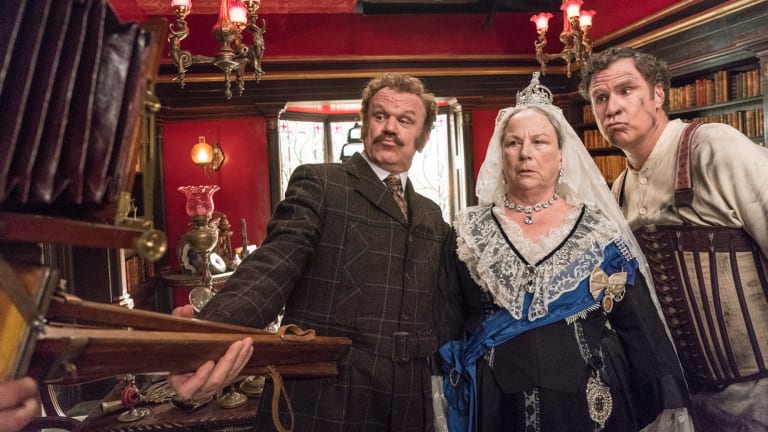 The film has been a long time coming. On set, director Etan Cohen – whose credits include Tropic Thunder – says the producers had started work before the Guy Ritchie film came out, then pulled back to allow the Holmes brand time to recover some energy. Then there was a sequel, so they pulled back again.

"We read the books counter-intuitively, trying to keep the film feeling true to Conan Doyle in the way he looks at chaos and logic," he says. "No one might think that about Step Brothers 2 but that's what we're doing. The buddy relationship is in the books; the way Holmes abuses Watson is only one notch away from the comedy of the film." 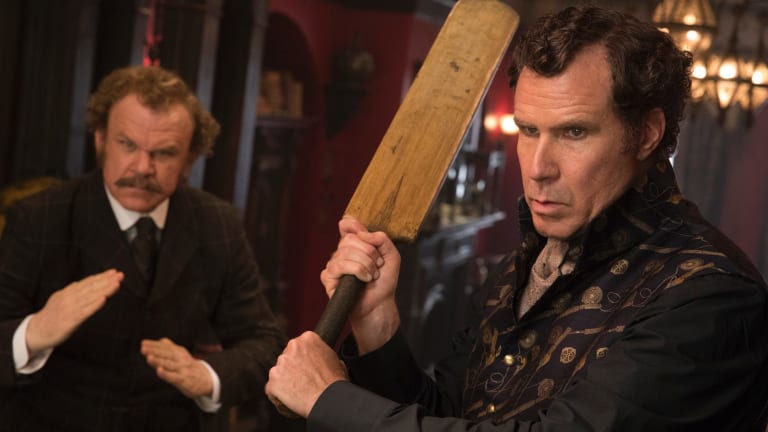 The two buddies come inside briefly for a chat during a break in filming. When this all began, says Ferrell, there was a suggestion that Holmes could turn out to be an idiot underneath the deerstalker, an idea that was quickly scotched. "We tried to figure out whether we wanted him to be Inspector Clouseau, figuring things out despite himself, but we decided no, we wanted him to be as smart as he's always been."

The lasting fascination of Sherlock Holmes, he thinks, lies in his magical mastery of logical deduction, "that he is able to take one element and figure out eight things". They won't be messing with that. "But he is not very good on the human side; that's where he's klutzy."

Producer Chris Henchy thinks the recent succession of hit Sherlocks is a boost for this one. "Sherlock is now more ripe for ridicule than ever. What's great is that people are familiar with the story, so it's time to make a comedy of it. Etan and Jimmy Miller went off and did a script that was really funny, so it was just a question of when would be the right time." There is a lot of improvisation on set, he says. "As long as we cover the script we're open to anything. We'll end up having a really long movie at first cut." 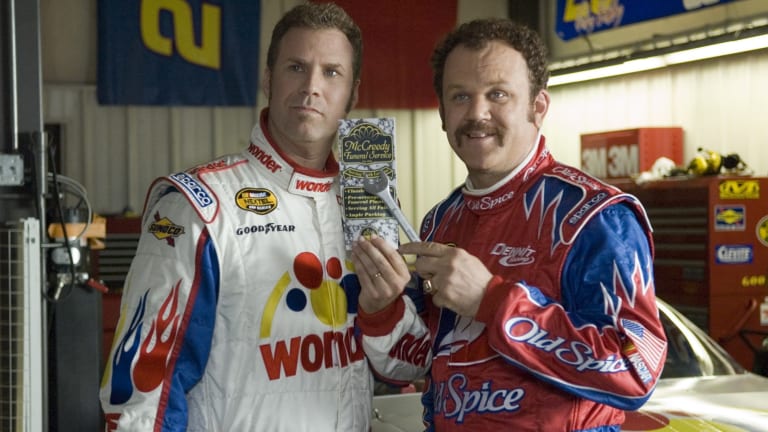 Will Ferrell and John C Reilly in a scene from Talladega Nights: The Ballad of Rickey Bobby.

Being English is a comedy bonus. Ferrell and Reilly exaggerate their pantomime English accents, which are one part Peter Cushing to two parts nobody ever, without tipping into ridicule; they sound like what they are, Americans trying terribly hard to get it right.

"I think we're doing all right," says Reilly. "Look, we're two American comedic actors taking on two of the most beloved characters in English literature. That is already pretty absurd. Do you think there is no one in England qualified to do this?

"We have someone working with us to make sure are in the right spot, but without stepping on us being funny with it, too. I have gone over the top with the overly posh accent. There is something inherently funny about it – to Americans, anyway."

Along with the fluting vowels come the usual ideas about Englishness. Victorian manners, the stiff upper lip, cricket: those old tropes never get tired. 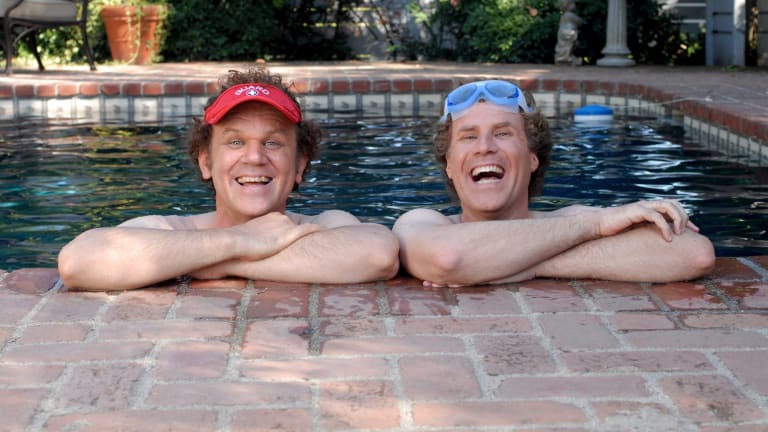 Will Ferrell and John C. Reilly ham it up in

"This is something that used to happen a lot in the late 19th century," explains production designer James Hambridge. "Buffalo Bill would come over to do shows. We're saying it's a trade exhibition being presented by the Queen, using the restored garden and using the palace as a backdrop. It's a bit twee, like a fete in a backyard – trying to be huge but not being, because it's a fete, so it's quite funny. That said, there are 200 people milling around here."

Reilly says they try to entertain the extras, who have been stamping gamely through mud for two days. "I try to say something to make them laugh so they are coming off a giggle as we start. It carbonates the air, gives it a lift." 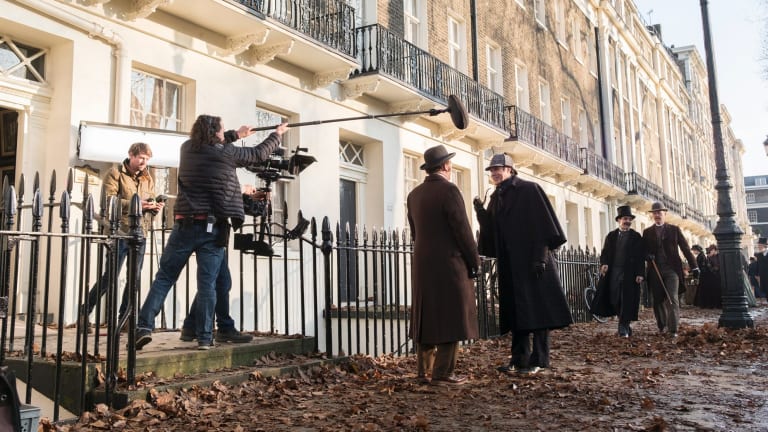 Behind the scenes on the set of Holmes and Watson with John C. Reilly and Will Ferrell.Credit:Giles Keyte

So will there be out-takes at the end of the film, as there were in Step Brothers? "Unfortunately, most out-takes are of me saying 'c—' between takes," he says. "I only say it because it makes the crew laugh so hard. We are not really allowed to say that word in America, whereas here it is a joyous thing. People love talking about it!"

Or a crew does, interjects Ferrell, at the end of a long day.

One blushes to think what Queen Victoria might have had to say about that. A second look around the fair also turns up quite a few exhibits that would have surprised her subjects. One tent features "food of the future": slices of pizza and hot dogs. A waxworks includes a Damien Hirst shark. "The future of exercise" is represented by steampunk exercise machines that look like giant treadle sewing machines. A garlanded gazebo displays "souvenirs" including models of Big Ben, the Statue of Liberty and a bison covered in autumn leaves.

"Putting comedy into sets is hard to do," says Hambridge. "The props are the funny bits but, in the end, it is a backdrop and if there is too much going on, it's distracting." At least he has a free pass to flout historical accuracy. The Titanic gets a guernsey, despite the fact Victoria had been dead for 11 years when it set off for New York. Even Albert Einstein has a walk-on part. "The director said 'how do you feel about how I'm cheating?'," says Hambridge. "But it's just fun, really. Comedy has different design values. My job is to keep the historic details as accurate as possible, but with a twist."

What is so good about doing a piece with a back story already in place, says Ferrell, is that you can easily step out of it. "It's a great leaping off point." 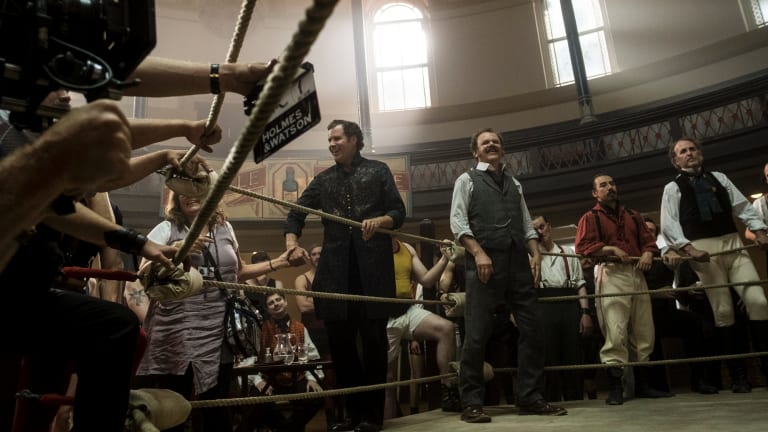 Will Ferrell and John C. Reilly on the set of Credit:Giles Keyte

As we are about to see: the cameras are rolling. Hall walks through the gates of the fair with Reilly's Dr Watson. "I could never live in a country with an unelected leader like the Queen." Her accent is gently Americanised, but she still sounds like head girl. "We elect the president, ensuring the finest and most qualified person will lead the country, not some wealthy tyrant who cares only for himself."

All anyone talks about here is politics, we're told; if President Trump is impeached before the film is released, as Hall fervently hopes he will be, she supposes they will just have to cut the lines. There is some more banter: does this president have to reveal his taxes? We're waved away; the day is over. This set, Cohen has told us wearily, took three days to build and is about to be destroyed. Mayhem is around the corner, but we will have to buy a cinema ticket to see that.

Holmes and Watson is released on December 26.