We here at Cosmopolitan are absolutely obsessed with movies, but we get that you’re a busy person, and it’s hard to see all the films that are going to be “important” in any given year. In this series, Low-key Highbrow, we’re giving you the basic gist on every one of those pictures you probably should have seen, but never got around to. When your friend inevitably throws that Oscars watch party, we’re here to help you scam your way into sounding like the smartest person in the room.

If you’re looking for a movie that has some of the best actors on the planet working alongside some of the brightest upcoming talent, Once Upon a Time in Hollywood is the film for you. Director Quentin Tarantino’s ninth movie is an absolute trip. It follows Rick Dalton (Leonardo DiCaprio), an aging actor, and his stuntman, Cliff Booth (Brad Pitt), as they navigate a Hollywood that isn’t nearly as welcoming to them as it used to be. Throw in a Charles Manson run-in and Sharon Tate (Margot Robbie) as Rick’s neighbor, and things get pretty interesting.

Tarantino is one of those directors that will generate awards buzz regardless of what the project is, because he just has that reputation in Hollywood. The film premiered at Cannes in May, and the reviews were mostly positive, but it did come with some controversy, which we’ll get to later. It’s made almost $400 million at the box office. The first time I saw this movie, I left my screening and Googled every possible thing I could about it for the next week. It’s so fun to watch. Brad and Leo act their asses off, and the ending is truly bonkers. It’s one of the only Best Picture nominees I’ve gone out of my way to see twice.

The film has been nominated for a bunch of awards this season. Brad has won essentially every supporting actor trophy possible, and the movie won Best Motion Picture – Musical or Comedy at the Golden Globes. Tarantino also took home the Best Screenplay prize.

Now, OUATIH is one of the nine films in the running for Best Picture. If it wins, there might be some blowback. Here are both sides of the argument.

Why people would be pumped if it won: 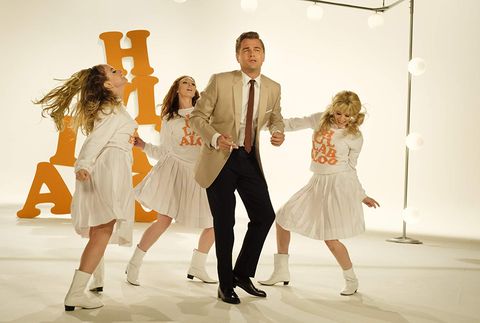 Why people would be pissed if it won: