This local comedy ends its premiere season with a double episode. The title character (Stephen Curry) continues his campaign to sabotage the relationship between his journalist daughter, Angela (Sophie Wright), and advertising copywriter Fin (Nick Russell). Curry has a fine time playing the crafty codger and almost gets away with being too young for the role. Here, he tries setting Fin up with a beautiful portrait artist (Andrea Demetriades). But, before that, the beleagured ad man gets a shock blast from the past. Created by Adam Zwar (Lowdown, Squinters), Mr Black reflects many of its creator's favoured sources for comedy: the use and misuse of language; the operations of the media; and the workings of relationships. Here a defiantly old-fashioned bloke conspires to subvert a metrosexual male. 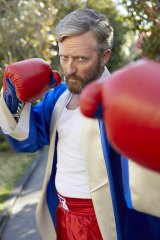 A typically brisk 21 minute-episode sees Sheldon (Jim Parsons) and Amy (Mayim Bialik) wrestling with an ethical dilemma involving their potential Nobel Prize contention and the shady tactics of two of their colleagues. Meanwhile Wolowitz (Simon Helberg) is tickled to learn that a waitress at the Cheesecake Factory once fancied him. It's thin material on which to build an episode, but this internationally successful sitcom, now into its 12th season, is nothing if not confident of its comedy and its characters and their capacity to carry it.