In “Vox Lux,” Natalie Portman gives the kind of aggressively big performance that teeters precariously, and at times excitingly, on the edge of vulgar indulgence. She plays Celeste, a drug-snorting, booze-chugging pop star, a banal narcissist who’s having a bad run personally and professionally, partly because she has sacrificed one for the other. Intimacy challenged, Celeste also has serious family problems, and her love life is scandalous fodder for professional gossips. She has a new album, though, and seems on the verge of a career rebirth, one that will affirm her place as a god in a profane world.

“Vox Lux” is an audacious story about a survivor who becomes a star, and a deeply satisfying, narratively ambitious jolt of a movie. Written and directed by Brady Corbet, it uses Celeste — an ordinary American girl who through a mass murder becomes extraordinary — as a means to explore contemporary spectacle. Corbet is especially interested in celebrity and terrorism, which he positions (without much of a stretch) as powerful, reciprocal forces in the flux of life. Here, a terrorist attack in another country becomes a sound bite at an American pop star’s news conference and, like clockwork, fuels a scandal, a bleakly familiar transformation of news into a show.

The story proper opens with off-putting violence in 1999. The scene is a Staten Island high school class on the first day after a break, with a teacher (Maria Dizzia) welcoming her students. A heavily armed student in black, his eyes darkly made up, enters. The teenage Celeste (Raffey Cassidy) tries to reason with the intruder, who guns down students, leaving a sickening, too-artful arrangement of the dead and wounded. Celeste survives, a bullet lodged in her neck and writes a eulogistic song with her sister (Stacy Martin) that becomes a sensation, transforming her into a star. She grows up to become a celebrity cliché that Portman, as the adult Celeste, takes on with outlandish verve.

The story unfolds in a series of discrete parts, some with self-conscious section titles that could seem merely pretentious if you miss the simmering, deep irony. Despite its spasms of violence, “Vox Lux” can be coolly funny, though you may be the only one laughing. Its overarching tone is calibrated sardonicism, an approach that is most evident in the serene, once-upon-a-time narration from an offscreen Willem Dafoe. First heard over images resembling home movies of Celeste and her family, the voice-over — which introduces Celeste by placing her on the “losing side of Reaganomics” and refers to her “predetermined destination” — also tips that she isn’t the only creator of her story.

The dry grandiloquence of the narration puts Celeste at a remove, making her seem more distant than she might be in a movie more interested in milking the viewer’s empathy and tears. She becomes a figure of pathos because she’s a victim, but also because of Cassidy’s subtle, physically inward performance. The actress’s coltish thinness, accentuated by some of the costumes, here reads as delicacy. At times it also conveys worrisome fragility, particularly in the scenes in which Celeste undergoes physical therapy and, later, awkwardly tries out some choreographed dance moves. You’re drawn to Celeste, yet her ambition suggests there’s more to her, a greediness. 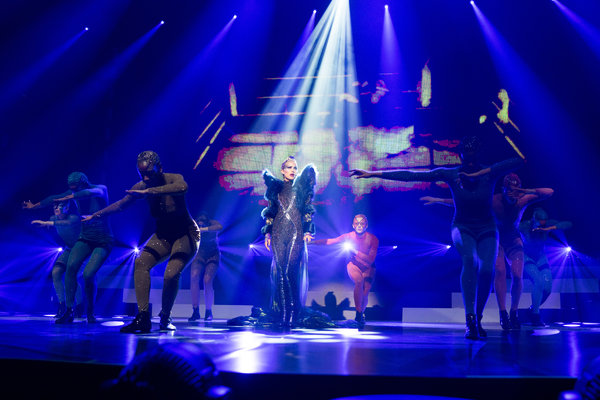 Portman enters in the second half and stays for the remainder. With her belted jeans and leather jacket, she brings to mind the mid-1980s Madonna (Lady Gaga, too), whose motorcycle babe in turn summoned up Monroe and Brando, a dizzying chain of pop-culture signification. By this point in the story, Celeste has it all, has done it all, a lot of it questionably. Hovered over by her longtime manager (a perfect Jude Law), she has betrayed intimates, indulged in the usual vices and become a tabloid mainstay. Her luminescence has disappeared, leaving in its place a hard, shiny 21st-century brand.

This is only Corbet’s second feature as a director, after his portrait of fascism, “The Childhood of a Leader.” Like that movie, this one has a fantastic score by Scott Walker that provides the familiar narrative assistance and editorializing, at times helping shift the tone from the intimate to the monumental, from the relaxed to the menacing. In a brief, bravura sequence that bridges crucial moments in the young Celeste’s life, the music — its swirling, urgent strings and resonant, heavily punctuating drums — accompanies low-angle images of New York buildings. The music and upward-looking shots suggest the point of view of someone small but also looming, ominous power.

Portman’s performance puts an exclamation point on Celeste’s every gesture, word and saunter. Everything about the character is outsized, extreme, including an accent that sounds like it’s been lifted from a New York cabby in an old Hollywood comedy. Celeste is by turns opaque and transparent; with her hair pulled off her face, her eyes darkly made-up (in an echo of the school shooter), she looks as if she has become her own mask. Much about her is different from when she was young, but when a second mass murder casts a shadow over Celeste’s life — and she quips about it — Corbet seems to be hewing to Marx’s dictum that history happens first as tragedy and then as farce.

In time, Corbet effectively hands the movie over to Celeste, who’s at once a casualty of her time and its apotheosis, a blank canvas, a force. This could be a nihilistic shrug on Corbet’s part, a surrender to the spectacle, except that Celeste — with her robot moves and blandness — brings her fans pleasure, meaning. She’s also fun, which may be enough. (Her songs, which Portman sings, are by Sia.) At times, including in the bloody opener, Corbet seems to be following the lead of the art-film auteur Michael Haneke, whose explorations of mediated violence can skew sadistic. By the time “Vox Lux” ends, it’s clear that Corbet has his own ideas; he’s still finding his way but, at 30, he is already a dynamic filmmaker.