FULL SPOILERS ahead for Jordan Peele’s Us!

For even more, check out our review of Us. Or get the details on the film’s huge box office opening. Learn about the horror movie homework Jordan Peele gave his cast to watch while making the movie. Or check out Peele giving the cast of Us the Ultimate Horror Quiz!

Us is a twisty, turny nightmare that advertised itself as a home invasion movie featuring some dastardly dopplegangers, but as we’re quickly learning when it comes to Jordan Peele movies, it ended up being a lot more than that.

We’re going to dig into the movie’s ending, and some of the symbolism throughout that can help us decipher it, but of course, to do that, we’re going into FULL SPOILERS.

What Are the Tethers?

Before we get to the meaning of Us’ final scene, let’s talk about the movie’s antagonists, the Tethers. Red, Adelaide’s tether, explains that the dopplegangers were an abandoned experiment commissioned by some unknown group (maybe the government) as a way to see if the population above ground could be controlled by puppets below. But things didn’t go as planned – big surprise for such an outlandish plan. You see, it ended up being the Tethers who were susceptible to being puppeted by their natural-born counterparts. The only exception to this dynamic that we know of, are Adelaide and Red.

Red is seen by her fellow tethers as a Messiah of sorts because she’s able to exert free will, and delivers on that by being the one to lead the tethers to the surface. And how was she able to do that? Because Red is the real Adelaide, the one that went into the funhouse back in 1986, when the movie opens. The Adelaide we spend most of the movie with was born a Tether and trapped her counterpart in the tunnels beneath the boardwalk when the opportunity arose. And after she gets to the surface, Adelaide thrives. We see a great example of this in the dance flashback, where Adelaide is able to dance as expertly as Red. Adelaide went on to have a full and happy life (well, until the events of the movie) – seeming to prove one of this movie’s central arguments – that forgotten and marginalized members of a community can succeed if they’re only given the opportunity. 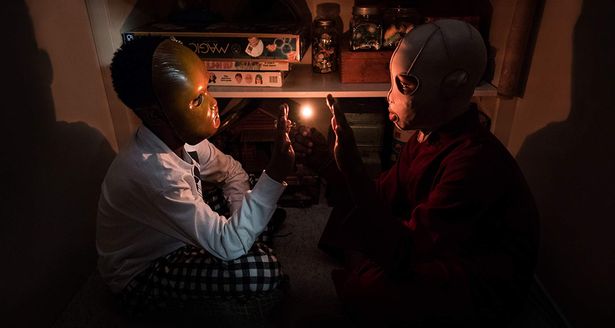 Reddit commenters have pointed out the holes in this theory, such as the timing involved. Was Jason abducted as a baby or closer to his current age? And if it’s the latter then how did he learn to speak when it would have taken so much time for a Tethered to learn to as well as to adapt to the surface world? (It took “Adelaide” years to.) There’s more to it all than that so feel free to fall down that rabbit hole in the comments below. Oh, and speaking of rabbits …

What’s Up (Doc) With Those Rabbits?

The opening credits play out over the imagery of rabbits in cages. Rabbits are also later seen throughout the tunnels occupied by the Tethered. These bunnies serve as a (raw) food source for the Tethered. Just as Doritos’ slogan was once “crunch all you want, we’ll make more,” the same is basically true of rabbits, animals known for multiplying like … rabbits.

But the inclusion of the rabbits here could be simply because Us director Jordan Peele is afraid of the cuddly-looking creatures. As Peele revealed to Rotten Tomatoes: “They’re supposed to be cute. On paper, they’re adorable, loving animals. Have you ever gotten close to rabbits? … Rabbits, you can tell in their eyes, they have the brain of like a sociopath. If you put a rabbit brain in a human body, you have Michael Myers, the killer. They’re no empathy.”

What questions did Us leave you with? Sound off in the comments below!

And for more on Us, check out our rave review, watch Jordan Peele and his cast take our horror quiz  listen to Peele on the IGN UK podcast, and learn what films they watched to prepare for Us.