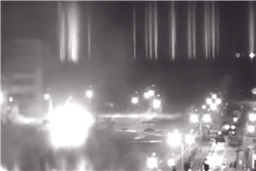 “You are looking at live pictures of a fire that has broken out at a Ukrainian nuclear power plant in the town of Enerhodar after an attack by Russian troops,” said CNN’s Erin Burnett tonight in what could literally be the most explosive story out of Vladimir Putin’s invasion of the Eastern European nation so far

“Firefighters are unable to reach the power plant, according to the Mayor,” added the anchor as the shelling and gunfire went on. You can see the unfolding situation at the Zaporizhzhia nuclear plant in real time on the livestream below:

Located in south central Ukraine, the Enerhohr plant is the largest in the country and the largest in all of Europe. Containing six reactors, with one under repair before today’s fighting, the plant provides around 25% of the country’s power source. As the bombardment intensified, Ukraine’s Foreign Minister took to social media to put the stakes in deadly perspective:

Not longer after, the Vienna-based International Atomic Energy Agency offered their own POV:

While CNN picked up on the breaking news out of Enerhohr at around 4:30 PM PT, Fox News Channel wasn’t that far behind. “Explosions & Gunfire Reported Outside Ukraine’s Largest Nuclear Power Plant” read one lower third on the Rupert Murdoch-owned outlet as host Jesse Watters interviewed correspondents on what was happening. Taking over at the top of the top of the hour like CNN’s Anderson Cooper, FNC’s Tucker Carlson leaped right into what he called “potentially a disaster.”

Back on CNN, described “Nuclear Policy Expert” Graham Allison compared today’s battle in Enerhohar to one of the horrors of the Cold War. “We should remember that Chernobyl in ’86 was a meltdown that spewed radioactive material all over Western Europe,’ Allison told a Kyiv located Cooper. “So it is conceivable that one could have another version of that. I hope not, I pray not.”

Though not heard on cable news, others online cautioned such Chernobyl comparisons:

Initially, MSNBC made no reference to the potentially disastrous state of affairs in Enerhohr. Instead, the Comcast-owned outlet stayed with Joy Reid focusing on U.S. domestic politics and divisions. It wasn’t until Chris Hayes took over at 5 PM ET that the channel even mentioned what was occurring in Enerhohar. Even then, MSNBC reverted to Beltway topics and themes fairly fast.

Just over a week ago, Putin ordered an invasion of neighboring Ukraine, a burgeoning democracy. The bunker-located ex-KGB agent issued the order under the pretext that Russian-speaking residents of Ukraine were under threat from purported “Nazi” forces there. The country he invaded with over 150,000 troops is led by a Russian speaker of Jewish heritage named Volodymyr Zelensky, whose relatives were killed in the Holocaust.

After surrounding Ukraine with 200,000 troops, Putin’s force was expected to quickly overwhelm the country and install a puppet government. Instead. More than a week later, as U.S. and its allies slapped severe economic sanctions on the increasingly isolated Russia, Putin’s troops have met stiff resistance from Ukraine’s military standing shoulder-to-shoulder with citizen volunteers. There is some expectation that, given the complications, Putin is ratcheting up the brutality of the attack.

As news broke of the battle at the Enerhohar plant, American politicians began to chime in, as expected: