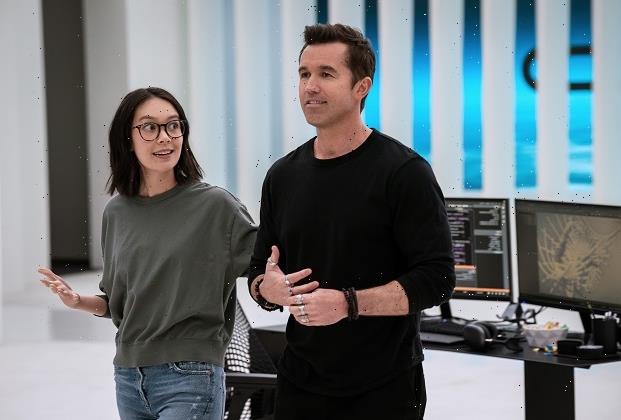 Joe Manganiello in Mythic Quest the movie? That’s David’s hope in a newly released trailer for the Apple TV+ comedy’s third season, which premieres with its first two episodes on Friday, Nov. 11, followed by one new installment weekly through January 6, 2023.

In the upcoming season, “as Ian and Poppy navigate the gaming world and their partnership at the newly formed GrimPop Studios, Dana is forced to play mediator to her bosses’ incessant bickering,” per the official synopsis. “Back at Mythic Quest, David settles into his new role as the boss where he truly finds himself in charge for the first time with Jo returning as his assistant — more loyal and militant than ever; and Carol attempts to figure out where she fits in after a new promotion. At Berkeley, Rachel struggles to balance her morals with capitalism, while a post-prison Brad tries to return to society as a reformed man.”

Press PLAY above to get a sneak peek at guest star Manganiello and more of Season 3’s storylines.

* Peacock is developing a TV series based on the 1996 movie Fear, which starred Reese Witherspoon and Mark Wahlberg, our sister site Variety reports. The project will be written by Jessica Goldberg (The Path) and the logline reads as follows: “This modern series reinvention finds two young lovers in a psychological game of cat and mouse — but who’s the cat, and who’s the mouse? When David and Nicole first meet in Seattle, it feels like an epic, once-in-a-lifetime romance — but soon it becomes clear that the seemingly perfect couple is anything but. Told from conflicting points of view, the series wrestles with personal demons, hidden agendas and reframes the ‘he said she said’ convention into a twist-filled suspense story about toxic relationships.”

* The documentary film Idina Menzel: Which Way to the Stage?, which follows the singer’s path to realizing her lifelong dream of headlining a concert at Madison Square Garden, will debut Friday, Dec. 9 on Disney+.

* Former Law & Order cast member Elisabeth Röhm will direct an episode of Law & Order this season. The episode, titled “Only the Lonely,” follows the investigation and trial in the murder of a high-level crisis consultant, who made many enemies in her career. Röhm starred as ADA Serena Southerlyn in Seasons 12-15 of L&O opposite Sam Waterston.

* Prime Video has released a teaser trailer for the drama Riches, an Amazon Studios and ITV co-production premiering with all six episodes on Friday, Dec. 2: