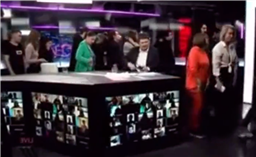 TV Rain, a youth-focused Russian TV station often critical of the Kremlin, was shut down by state authorities on Thursday, but its staff got in one last full newscast that ended in a symbolic protest.

At the end of the night’s report, the staff gathered around the news desk. The anchors were overhead saying “no war” as everyone walked off together. The broadcast image of the empty studio was replaced by the TV station’s logo and a message asking for donations before the telecast cut to old footage from a performance of Tchaikovsky’s ballet Swan Lake.

The Swan Lake bit was an inspired, highly-evocative gesture, especially for Russians who could recall the coup of August 1991 when, unable to actually report the news, stations simply played footage of the ballet for three days nonstop.

Russian telecommunications regulator Roskomnadzor, announced this week it was banning TV Rain, accusing it of inciting protests and disrupting the public, according to the New York Times.

TV Rain was excised from cable bundles in 2014. The channel had persevered online and on YouTube as an independent voice often critical of the Kremlin.

The Times also reported that Echo of Moscow, the independent-leaning radio station “founded by Soviet dissidents in 1990 and that symbolized Russia’s new freedoms,” was recently shut down by its board. Ironically, given its origins, the station was owned by Gasprom, Russia’s government-owned energy behemoth.

RT America To Halt Production & Lay Off Most Staff After Being Dropped By Major U.S. Distributors