Though you could enter this story from any number of angles, “Trigonometry” starts with Ray (Ariane Labed), a world-class synchronized swimmer who decides to change her life after a jarring accident. Moving out of her parents’ home and journeying to London, she finds a room in a flat, leasing from partners Gemma (Thalissa Teixeira) and Kieran (Gary Carr).

With Ray taking other jobs in the city, Kieran working as a paramedic, and Gemma trying to keep her humble cafe afloat, these three each have their own swirling lives distinct from each other. But as Gemma and Kieran start to consider the possibility of spending their lives together, they both find themselves drawn to the woman living in the next room.

So “Trigonometry” evolves in stages as these three start to navigate their feelings toward each other. Each chapter in this eight episode season (which originally aired on BBC Two earlier this year) represents a new step on their way to understanding how they can best share that love among themselves. Putting a convenient label on the series as “a show about ____” feels just as inadequate as labeling any of the three people at the show’s center. In the more-than-capable hands of writers/creators Duncan Macmillan and Effie Woods, the people of “Trigonometry” find themselves in circumstances they don’t completely understand, but they all find solace in human connection, however that may manifest.

For this core triad, “Trigonometry” finds itself in a delicate balancing act, outlining three individual relationships that have to be cohesive and distinct at the same time. Much of the work for Gemma and Kieran is done through their shared history, regardless of what state their relationship is in when Ray arrives. The show captures the gradual progression from each being taken with Ray on arrival and then finding the emotional bedrock to match that initial magnetic attraction. 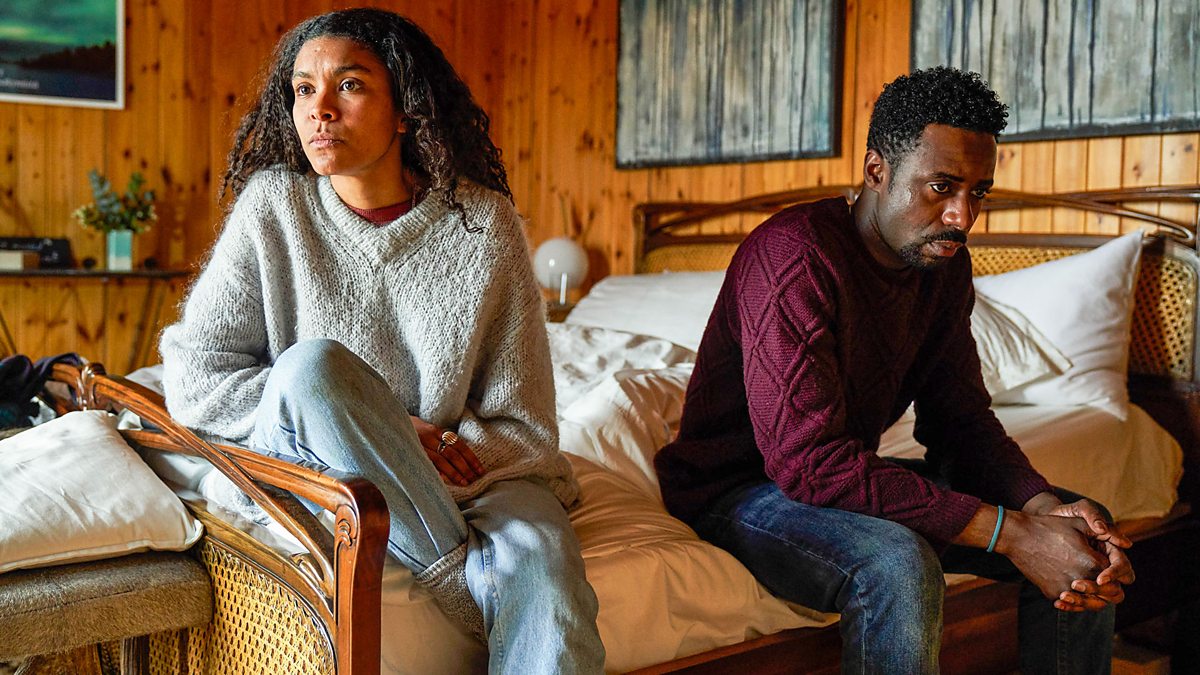 That process is helped along by a patient, observant mode of visual storytelling that’s a perfect fit for Macmillan and Woods’ writing. Athina Rachel Tsangari, director of “Attenberg” and “Chevalier,” brings to the first five installments of the season a keen eye for the character-based grace notes that shade in the world around Gemma, Kieran, and Ray. Working with DP Sean Price Williams, this core creative team (including Stella Corradi, who directs the last three episodes) understands the way that all of these pieces fit together and how not to mistake prioritizing one over the other. There’s a particular rhythm to the way that “Trigonometry” floats around its characters as they’re trying to triangulate their own feelings.

It’s a kind of harmony that comes through in the trio of central performances, too. Drawing on both warmth and frustration whenever each is called for, Teixeira, Carr, and Labed do eventually grow together as a unit. In the scenes where dialogue falls away and all that’s left is two or three people looking for something unspoken in each others’ faces, these are three performers more than capable of filling in those spaces with all the jumbled feelings that new and renewed love can bring.

Gemma, Kieran, and Ray have the kind of dynamic that sings on screen even when they’re trying to suppress it (either to themselves or to each other.) So “Trigonometry” also recognizes that those people in the circles around them would notice it, too. The cafe employees, Kieran’s EMT mates, and Ray’s friends from her swimming days all track the subtle and not-so-subtle shifts in their day-to-day attitudes. There’s a sharp focus on the changes happening inside the flat, but the ripple effects from those incremental differences extend out far beyond how they pass by each other in the hallway.

The best example of that is the way that “Trigonometry” shows each character’s respective family life. As Kieran, Gemma, and Ray face milestones and unexpected occurrences alike, the ways that their parents arrive — and their preferred ways of choosing to help each situation — are reflections of how their children respond in times of uncertainty. That “Trigonometry” has enough room to tell their stories too is a tribute to the economy of storytelling happening in every interaction. 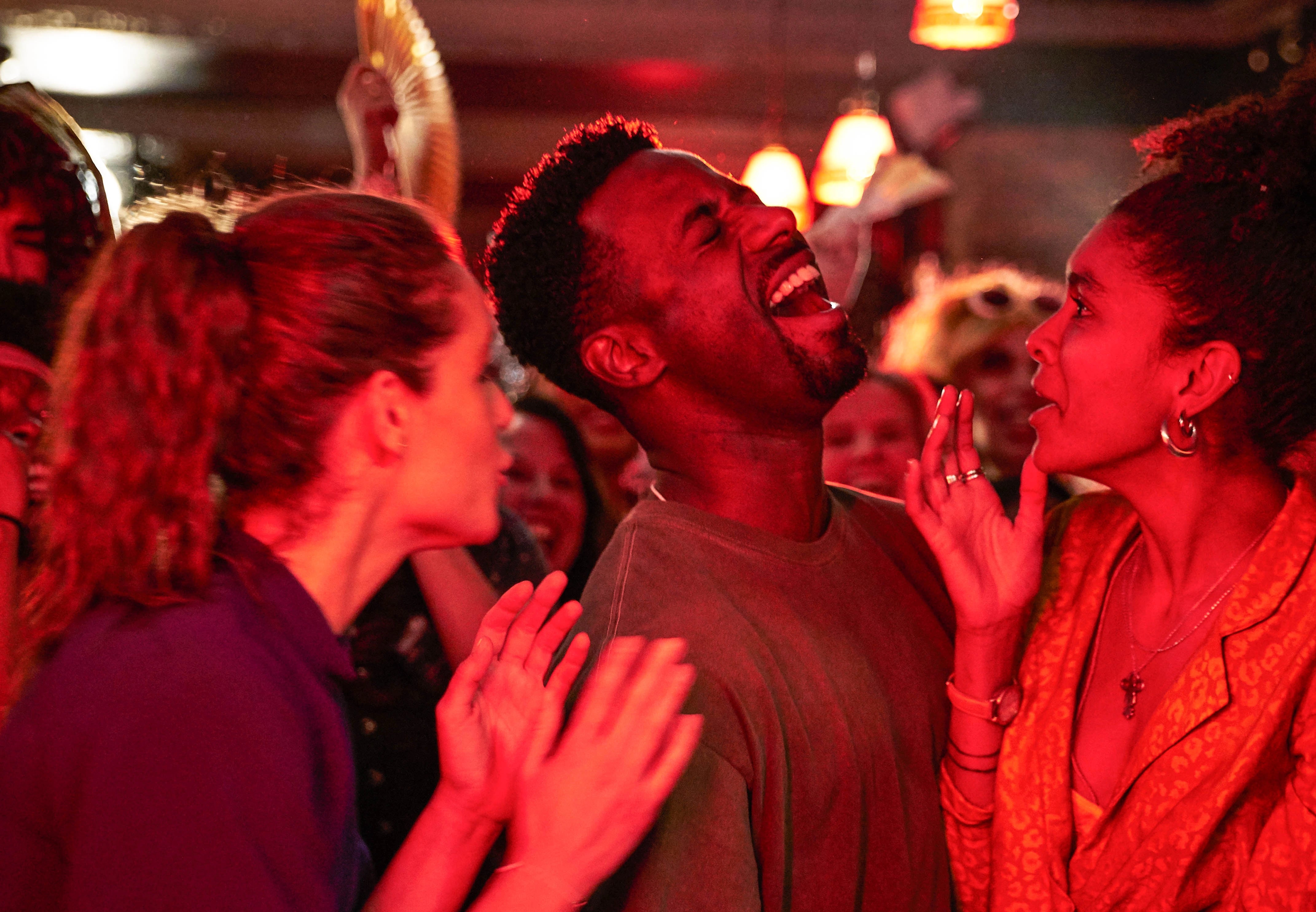 Given Macmillan and Woods’ respective backgrounds as playwrights, it’s no surprise that “Trigonometry” has an acute spatial awareness. There’s an incredible amount of character brought out through distance and the way that Gemma, Kieran, and Ray occupy the physical area around each other. From the moment that Ray and Gemma first meet, the camera tracks how these three move through each other’s worlds. The resulting warmth and vitality that comes from sharing more and more becomes one of the main ways that “Trigonometry” gets propelled forward.

By the end of the season, there’s a strength in the bond between these three that’s forged because they embrace their uncertainty, not in spite of it. There are plenty of stretches where feelings of jealousy and regret and anger are unspoken — the points when Macmillan and Woods allow those to bubble into actual words are consistently surprising and done in different ways. Spontaneous outpourings of affection, thought-out written expressions of feelings, and frank discussions of boundaries — they all combine in this carefully constructed evolution of love that always manages to feel organic, even when the inexplicable happens.

So even as some within Gemma, Kieran, and Ray’s orbits may see this as something radical, “Trigonometry” isn’t necessarily a reinvention or an unconventional approach. It takes all the messiness of affection and heartache and loss and instead of affording it to a central couple dealing with someone on the outside, it treats these three characters as partners each worthy of attention in their own way. Like any good relationship, it’s hard work. But there’s enough communication between characters (and between the storyteller and audience) to build something special.

“Trigonometry” is now available to stream on HBO Max.