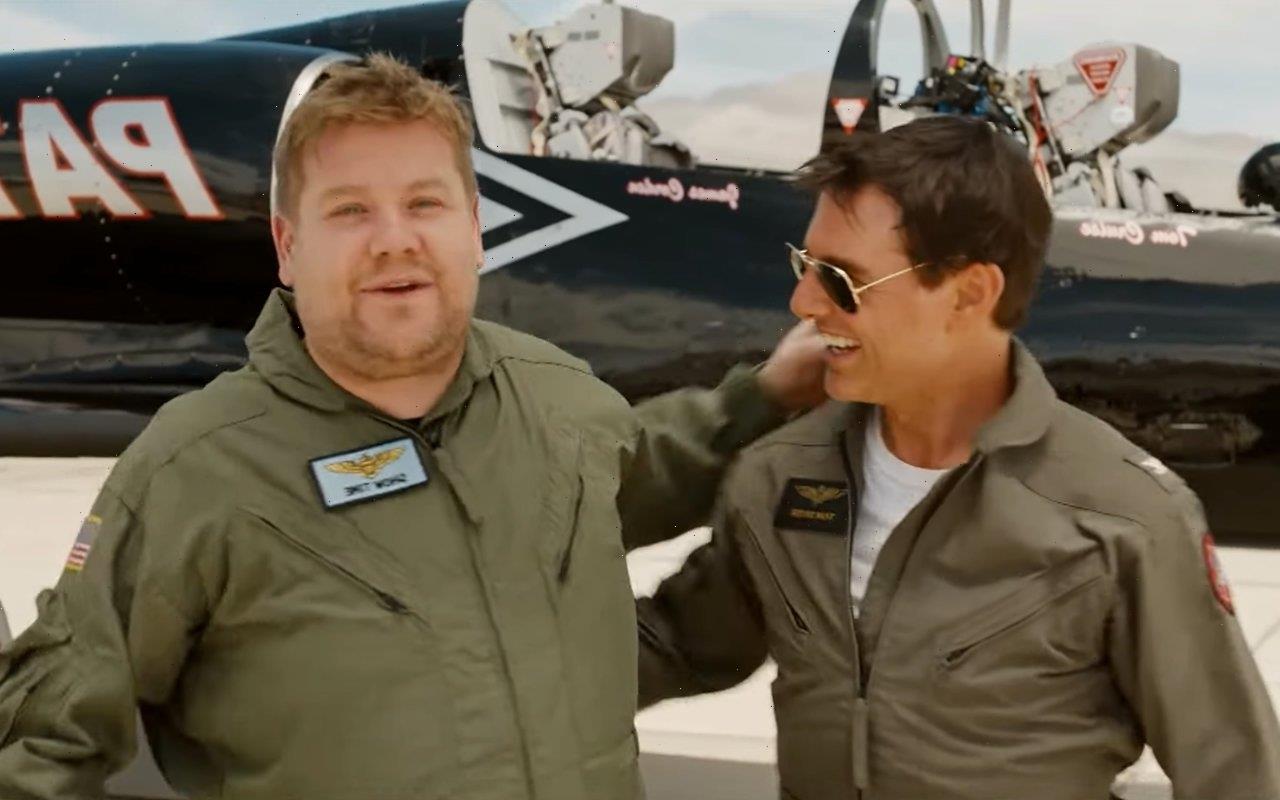 The Capt. Pete ‘Maverick’ Mitchell depicter scares the TV presenter by taking him to the danger zone with a pair of frightening flights in ‘Top Gun: Maverick’ fighter jet.

“It is 4:56 A.M. I’m in Burbank Airport and I’m here because Tom Cruise has asked me to meet him here at 5 A.M.,” the TV host explained in the Tuesday, May 24 episode of the “Late Late Show”. He added, “When Tom Cruise calls, you sort of have to say yes.”

Tom, who’s known for engaging in a number of public sky activities, was then seen arriving. The 59-year-old actor said to the camera, “I’m very excited that James is doing this. Was he the first late-night show that I asked? Hell no. He was just the first one, the only one, to say yes.”

After Tom and James arrived in the desert, Tom told James, “Last time, we jumped out of an airplane. Today, we’re gonna go flying.” James immediately protested though he finally agreed to fly with Tom.

Later, things got serious when a dueling plane popped up to challenge them. “We’re in a dog fight,” Tom said, as James screamed, “I don’t give a s**t.” After they successfully landed, Tom assured James, “You did good,” before the comedian teased, “The fact that this is your idea of a fun day out tells me how different we are as human beings.”

Just when James thought he’d survived, Tom informed him that they would be going up again, this time in a jet fit for modern aerial warfare. In an attempt to convince James, Tom said, “You are my Goose,” a reference to his “Top Gun” character’s best friend in the original 1986 movie.

“When you said I’m your Goose it makes me feel excited and then I realize that Goose dies in the film,” James explained in response. “You’re the first half of the film Goose,” Tom insisted, “That ‘You’ve Lost that Loving Feeling’ Goose.” James quipped, “That’s the Goose I want to be. I want to be in a bar, singing.”

As Tom and James suited up for the fight, James said, “You look like a fighter pilot, I look like a hamster.” When Tom took James to the danger zone and started stunting, even flipping the plane upside down, James got scared. “Oh my God,” he screamed, “This is absolutely ludicrous. This is the craziest thing… this is the stupidest thing I have ever done.”

“You absolute bastard,” James told Tom, who enjoyed their flight, “I’ve got an idea, why don’t we fly straight for a bit?” Tom then responded, “Okay, we’ll fly straight,” before casually flipping them over again.

Back on the ground, Tom praised James for how he handled it all. “You can be my wingman anytime,” he said. In response, James told the “Mission: Impossible ‑ Fallout” actor, “You know what, I think I’m good.”

“Top Gun: Maverick” is out in theaters on Friday, May 27. The long-awaited sequel sees Tom making his triumphant return as Capt. Maverick, this time returning as an instructor for the elite fliers three decades after he graduated from the TOPGUN Naval aviation program.