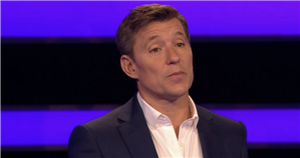 Tipping Point fans were left in hysterics when one contestant accidentally let slip a rude answer to one of the questions.

Good Morning Britain presenter Ben Shephard returned as the host of the arcade-themed show with the latest bunch of quiz heads who were battling it out to take home the hefty cash prize.

Jenny, Jason, Shilpa and Steve were at the podiums in a bid to push over as many counters as they could in order to collect a cash prize to take home.

But they certainly weren’t prepared for Shilpa’s cheeky answer to one of the questions.

Ben read out the question: “In the novel ‘Moby-Dick’, what is the name of the one-legged sea captain?”

Shilpa replied that she had heard of the book but didn’t know the character.

Deciding to hazard a guess, she said: “I think I’ll probably just guess at Captain Seamen.”

Ben immediately burst out laughing and pulled a face at the answer.

Viewers at home had the same reaction and took to Twitter to voice their amusement.

“How did Ben not piss himself at captain seamen, I’d of still been laughing,” asked one fan.

“Did she just guess Captain Semen? Ben thought so me thinks.” laughed another.

Someone else wrote: “Captain Seamen! I’m dying here” followed by a string of laughing emojis.

A fourth tweeted: “Captain Seamen we seen that one COMING,”

Despite the wrong answer Shilpa managed to get herself all the way to the final round, beating out Jason by just one counter.

However, she failed to get the jackpot counter to drop after a string of wrong answers.

She did manage to take home a decent £2150 which she said she would spend on presents for her son.

Get the latest updates on all the things TV and showbiz by signing up to the Daily Star showbiz newsletter .