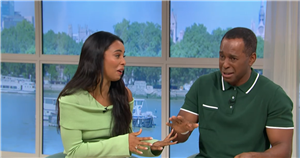 This Morning fans have called Andi Peters "unprofessional" for laughing at a guest on the latest show.

Tuesday's episode (August 16) of the ITV programme saw Andi and his co-presenter Rochelle Humes interview Patrick the Pony and his owner Kirk Petrakis.

Earlier this year, the shetland pony was elected as the ceremonial Mayor of Cockington – with the animal recently banned from a local pub.

At the end of the interview, Kirk asked Rochelle and Andi if he could sing a song about Patrick and the presenters agreed.

Following Kirk's rendition of the song, Andi burst into tears of laughter – with viewers on Twitter deeming his behaviour "unprofessional".

Another said: "Nope, that isn’t cool laughing at this man singing. He has a good heart, totally unprofessional."

Meanwhile, a fourth said: "Loved Patrick the mayor pony and the song his owner sang. Shame the presenters were laughing."

"Yes I know quite funny but highly disrespectful laughing at him," another viewer concluded.

As Andi and Rochelle ended the interview with giggles, they tried to explain what had made them laugh so much.

Andi explained: "No one mentioned the song."

Rochelle added: "Sorry, we had no idea that was going on.

"It was lovely, it was a really nice song, but I just didn't know where he was going to go with it."