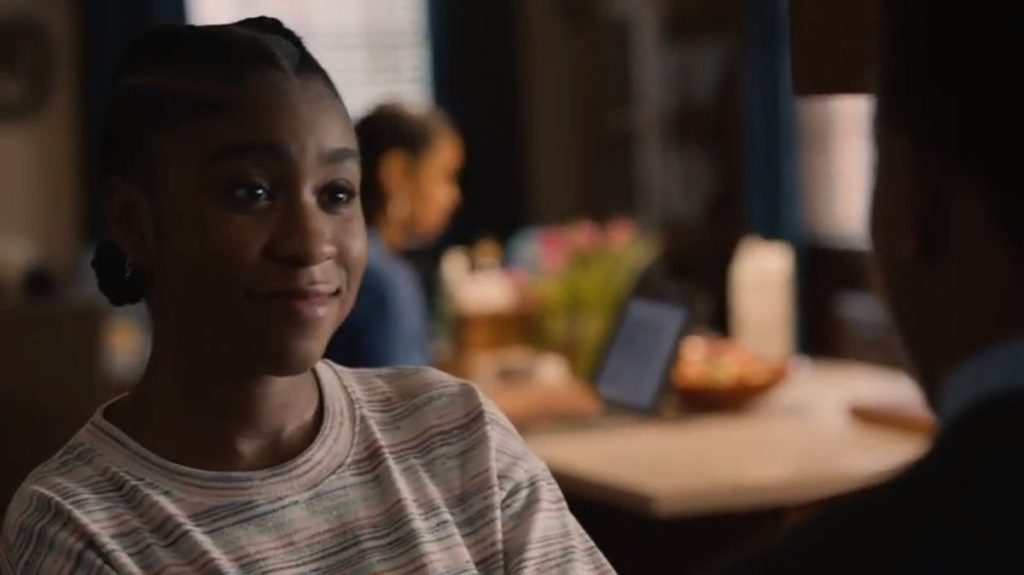 The scene opens in this Pearson family’s dining area near the front door hallway, an area of their house often seen on the hit NBC show. Breakfasts at Randall’s house in Philly mean everyone gathers there early in the morning for one reason or another.

Beth (Susan Kelechi Watson) has served the girls and the youngest Pearson sister asks her mom if she can go to the salon because her hair is “a fright.”

The preteen borrowed this antiquated expression from the classic novel Little Women. Because of this reference and apparently others said in the past, Tess (Eris Baker) wants Beth to stop Annie (Faithe Herman) from continuously reading the same book.

Randall gets ready for work on This Is Us

He’s wondering whether or not to wear a striped shirt. His other choice is to stick with a solid colored shirt instead.

The councilman says that solid means he “stands by his convictions.” Stripes mean he “represents his entire community.”

Randall gets goofy while bragging to Deja (Lyric Ross) about Malik’s choice of a person to shadow. However, she reminds her dad this is simply happening due to a civics class assignment. And besides, Malik is in a quarantine pod with Deja’s entire family.

After Deja says Randall is enjoying the idea of Malik spending the day with him “far too much” she tells him, “Something is wrong with you.”

Malik arrives to accompany Randall to work on This Is Us

Cue the doorbell as Malik enters wearing a very smart suit. He is also wearing a striped shirt and of course, Randall approves.

Before the pair leave for work, Deja takes Malik aside to give her boyfriend strict orders.

Then, as she backs away, she tells him “good luck over there, OK?”

Although this is a cute scene, the content doesn’t really betray any This Is Us secrets.

Fans are still waiting to hear more about Randall’s birth mother after the shocking realization in the premiere episode that she happens to be alive.

The new parent apparently survived a heroin overdose after giving birth to Randall who was taken away by his father.

Not knowing what to do, William (Ron Cephas Jones) dropped the newborn off at a fire station — and the rest is Pearson family history.

This Is Us airs Tuesdays at 9/8c on NBC.