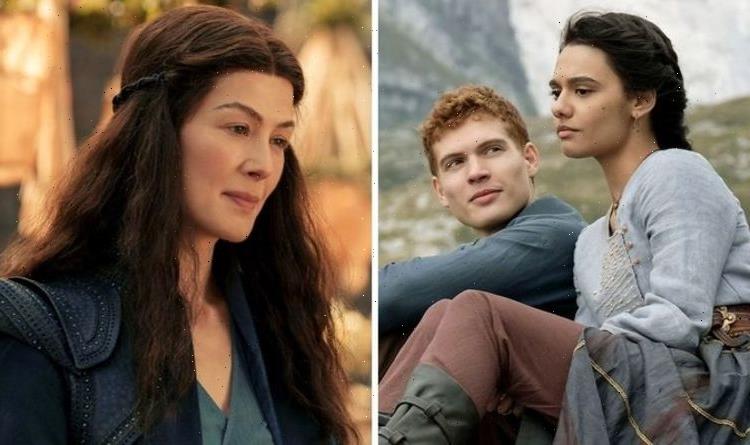 The Wheel of Time: Trailer for new show based on book series

Amazon Prime Video’s highly anticipated fantasy series begins on Friday 19 November and ahead of its premiere, Wheel of Time writer Amanda Shuman detailed the difficult process of bringing Robert Jordan’s work of epic high fantasy to life. She also admitted fans of the novels may spot some necessary departures from the original story.

The star-studded adaptation features Rosamund Pike as Moiraine, a member of a powerful group of women known as the Aes Sedai.

Author Robert Jordan’s series began back in 1990 with The Eye of the World, and fantasy fans have been itching for a live-action adaptation ever since.

However, writer Amanda confirmed to Express.co.uk the long-awaited TV series had to condense some parts of the writer’s lengthy tomes.

“It was a lot of pressure because like I think for me, it was always two things,” she explained.

“We wanted to make the fans happy because they love these books so completely.

“But we also wanted to make a TV show that people like me when I started having not read the books could understand and enjoy just as much.”

Jordan’s ambitious series of 14 novels, finished by Brandon Sanderson after his death in 2007, is set in an unnamed world which appears to be both Earth’s distant past and far-flung future.

In the first season of the new series, the Aes Sedai Moiraine sets five people on a journey around the world, believing one of them could be a figure known as the Dragon who has been prophesied to save the world; or destroy it.

The mind-boggling premise of the novels proved a daunting challenge for Amanda and showrunner Rafe Judkins when it came to bringing the Wheel of Time to screens.

She continued: “So it was always a tricky balance of figuring out what to condense, what to not put on screen.

When asked if there were any specific moments left out of the series, Amanda confirmed there were some storylines in the book which required a necessary pruning.

She said: “The thing that I always tease about is that the books, if you’ve read them, there are a lot of characters that walk to a lot of ends and there’s sort of a lot of space that we can easily trim out.”

Given most of Jordan’s books are upwards of 700 pages, it may take some time for new fans to the series to find out what has and hasn’t made the cut.

Even so, the Wheel of Time series has regularly topped the New York Time Best Seller List, so there are plenty of readers out there who’ll be able to spot the changes.

In the meantime, Prime Video’s bold new adaptation is poised to become a major TV hit, and could even knock fellow fantasy drama Game of Thrones off its podium.

A second season has yet to be officially confirmed, but Amanda was candid about her hopes for the future during the premiere.

She confirmed: “Indefinitely, I think we would love to completely tell the whole story through the entire books, if we are so lucky, I’d be eternally grateful.”

The new streaming series will need at least 14 seasons to complete the saga, so fantasy enthusiasts will be keeping their fingers crossed for a successful first instalment.

The Wheel of Time premieres on Friday, November 19 on Prime Video.