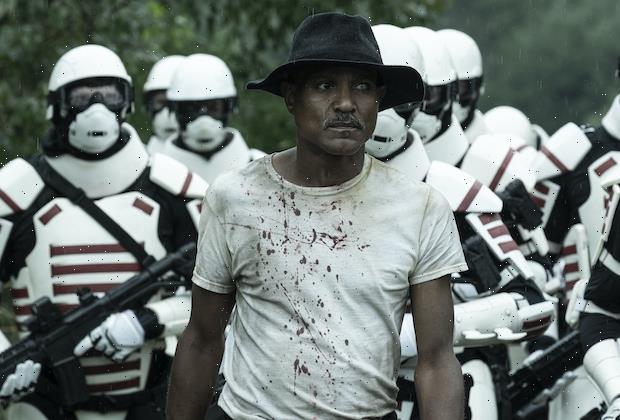 In Sunday’s episode of The Walking Dead, Lance all but sighed, “Good help is so hard to find.” But by the end of the hour, he’d managed to put out a job offer to a potential recruit who promised to be a living nightmare for Daryl, Maggie & Co. Who? Read on…

‘WE SAVED YOU A BULLET’ | As “Trust” began, Lance, Daryl and a bunch of troopers had arrived at the site of Carlson’s last stand. Gabriel and Aaron swore that, cross their hearts and hope to live, the apartment dwellers had killed everyone but them and then fled. Though skeptical as hell, and understandably so, Lance didn’t push them off the roof right then and there but continued his search for the killers and his missing weapons. Stop No. 1: Hilltop, where Daryl had to intervene to keep Lance from shooting his way in when Maggie refused to throw open the gate. Once inside, Lance went so far as to attempt to scare a confession out of Hershel, whose cap he’d found at the apartment complex. It did not go well for Lance. Elijah immediately leapt to the boy’s defense, and soon, Maggie and her peeps were in a standoff with the troopers that was one itchy trigger finger away from becoming a massacre. Things got so tense, in fact, that Daryl was moved to threaten Hornsby. (His quarterly review is gonna be terrible!) But in the end, the villain ordered his men to stand down and moved on. And that very night, they discovered a tent in the woods, near it, their missing guns. As quickly as the troopers discovered that the tent was empty, shots rang out, and Lance began yelling that its occupant had really inconvenienced him and owed him at very least a talk. Since this is a TV show, his ploy worked, and out of the shadows came Leah (despite knowing the woods were full of troopers — d’oh!). “I’m here,” Lance told her, “to offer you a job.” If it involves eliminating his new archenemy Maggie — who you’ll recall killed Leah’s Reaper pals in cold blood — I have a feeling she’ll be filling out a W-9 by next week. 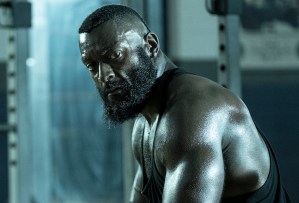 ‘I AM JUST A SOLDIER’ | In other developments, Princess, these days waking up in Mercer’s bed, pushed her boo to open up about what was troubling him. In response, he shut down and shut her out. At the same time, Eugene and Rosita were filling in Connie and Kelly on Sebastian’s sick “moneymaking” scheme. It was a great story, but Connie couldn’t report on it without inside access and stolen documents. Unfortunately, Eugene soon discovered that Max was terrified to be his mole. She might not have been swayed at all, had she not learned that her brother had been present and in danger thanks to Sebastian’s “fundraising.” Making a beeline for Mercer, she challenged him to upset the status quo and help make the Commonwealth better than it was. By going after Sebastian? “What if I disappear?” he asked. “Who keeps this place running?” Valid questions. He was still turning them over in his head when he apologized to Princess for clamming up on her and confessed not only that he’d shot two of his men but would do it again. Elsewhere, Max agreed to do Eugene’s bidding. She’d hoped things would go back to normal but had realized that “there is no back to normal. We know what we know. Because of that, things have to change.” Whatever came their way, Eugene promised, she wouldn’t have to face it alone. He even sealed his vow with a kiss. 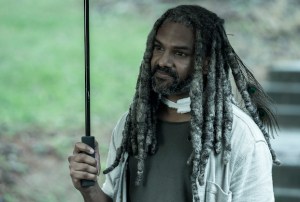 ‘THE LEAST I CAN DO IS SAY THANK YOU’ | When Ezekiel bumped into Carol, he reported that he was recovering nicely and had a good prognosis. He also owed her a thank-you, given his initial reaction to her intervention on his behalf. Could he show her what he’d been doing with the extra time that she’d bought him? Not today, she said. She was busy with her “new job.” From there, Ezekiel convinced Tomi to come with him to perform an appendectomy on a friend who needed the operation but didn’t want to put her family in debt. (Sound familiar?) Alas, they hadn’t even made it so far as the hospital exit before they were busted by a trooper… who then called in Carol, who got them out of hot water. Turned out, Ezekiel and Nurse Leo had started a free clinic in the veterinary treatment area of the stables. While Tomi tended to the patient, Ezekiel told his ex that “it was important to me that my friend know just how much I appreciate her.” Noting how troubled she seemed, he tried to point out how much light she brought into the world. Uh-huh. “You know we’re not getting back together, right?” she quipped. Even though they totally should. Oh, and if you were wondering, despite the fact that the patient’s appendix ruptured, and Ezekiel and Carol were pressed into service as nurses, the operation appeared to be a success.

So, what did you think? Hit the comments with your reviews and riddle us this: Which Lance is scarier/creepier — Lance all smiley and pretending to be nice… or Lance with the dead face and eyes burning with bloodlust?