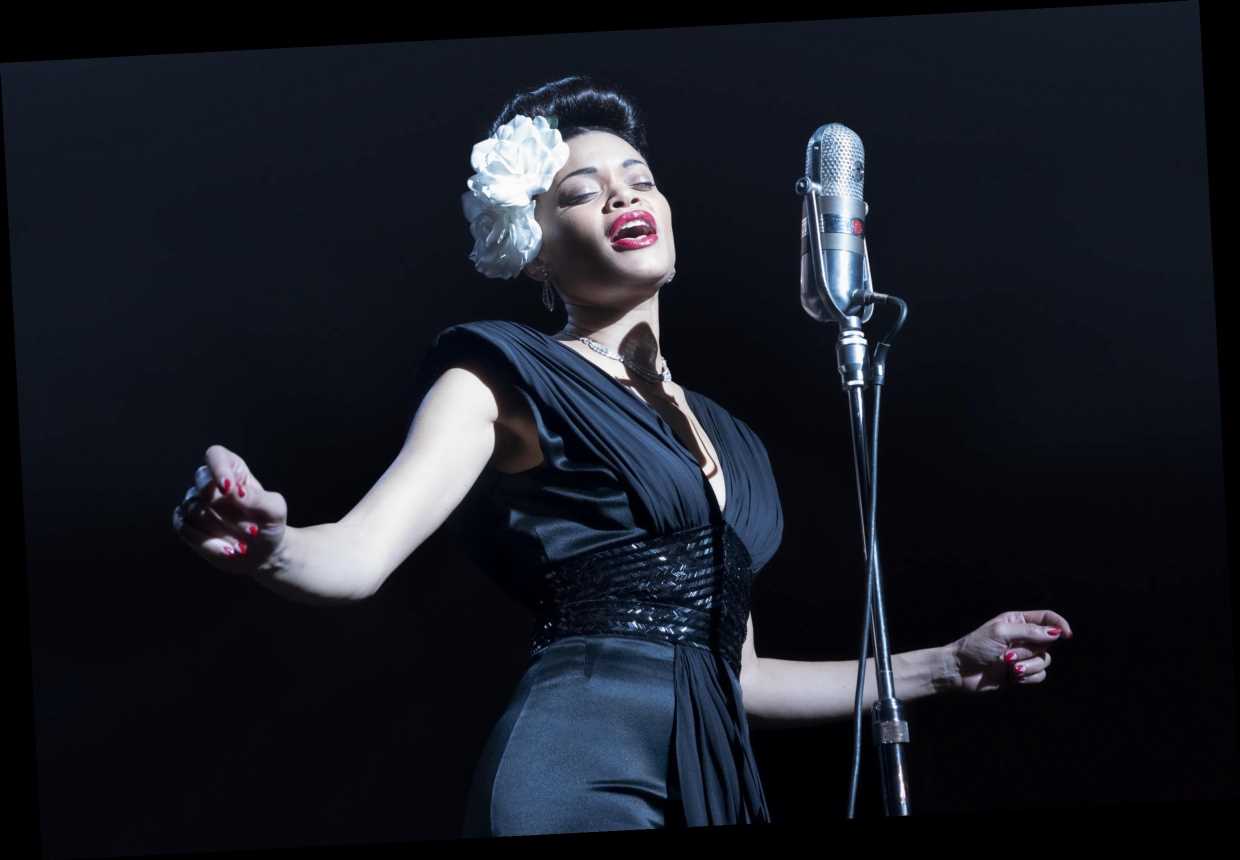 A feverish and fitfully compelling biopic that spreads over the last decade of Lady Day’s life, Lee Daniels’ “The United States vs. Billie Holiday” frames the government’s war on the smoky-voiced jazz singer as a portrait of two bad romances told in parallel: one, a forbidden spark between an African-American icon and the undercover fed who may have fallen for her, and the other an unrequited love story between them both (and the country that refuses to love either of them back). In a way that won’t surprise anyone familiar with the director’s ever-florid work, the acute geometry of that premise is expressed through — and often betrayed by — the general shapelessness of a hot-house melodrama that embraces its namesake’s “all or nothing at all” ethos to a fault.

Much like “Precious” and the Daniels-produced “Monster’s Ball” before it, “The United States vs. Billie Holiday” is somehow overbaked and raw as a bone at the same time, at all times. And much like those previous films, this one swirls around an astonishingly real performance that centers everything around it like the eye of a storm — one that can see naked truths about the continued subjugation of Black people in America through a flop sweat haze of hoary tropes and handsome window dressing.

To a certain extent, Daniels is a perfect fit for this material. Holiday’s life offers an intoxicating cocktail of high camp and historical urgency, and you can feel the director’s love for “Lady Day Sings the Blues” even as he takes a velvet wrecking ball to the 1972 biopic’s sweet candied shell. Operating in a different political climate that’s (somewhat) ready reckon with the systemic evils of social injustice, Daniels is empowered to honor the ill-fated chanteuse by showing how cornered she always was.

“The United States vs. Billie Holiday” was adapted from a chapter of Johann Hari’s “Chasing the Scream: The First and Last Days of the War on Drugs” and maintains a hint of that book’s journalistic fervor, even as Suzan Lori-Parks’ screenplay fudges so many of the key facts. However, it has one key strength in Daniels’ decision to strip away his subject’s iconography and recontextualize her as a kind of self-destructive civil rights hero; as a heroin-addicted hot mess who got high enough to see the government’s war on her for what it was, and recognize just how far her into the future a certain song would echo so long as she refused to stop singing it.

In other words, Daniels’ Lady Day never seems to recognize that she’s in a typically overstuffed Hollywood biopic, which is a small miracle — and a strong testament to how deep behind the music Andra Day is able to go in her big-screen debut — considering that “The United States vs. Billie Holiday” somehow drapes its star in more genre clichés than it does column dresses and silk bathrobes (costume designer Paolo Nieddu milks the film’s Prada collaboration for all its worth, and makes good on the script’s description of Holiday as someone who “looks like a million bucks but feels like nothing”). Introducing Holiday in the shadow of 1937’s failed anti-lynching bill and her subsequent determination to keep performing “Strange Fruit” at all costs, the movie begins with the worst kind of framing device: One it doesn’t need.

It’s May 1957, and a down-and-out Holiday is sitting for a paid interview with a gasbag journalist named Reginald Lord Devine (played, of course, by Leslie Jordan) who asks questions like “What’s it like to be a colored woman?,” feeds on the film’s nuance like an insatiable house boiler, and generally embodies the pernicious novelty with which even the most “gracious” elements of mid-century white America tended to view their Black compatriots. But for Harry Anslinger (Garrett Hedlund in a thankless part), the newly appointed head of the Federal Bureau of Narcotics, desegregated spaces were an affront even if they were shared for the sake of white entertainment.

“Drugs and n—rs are a contamination to our great American civilization” is how he puts it here, as the film pulverizes Anslinger into a cheap proto-Hoover despite affording him plenty of screen time to become his own kind of villain. There are only so many shades to such virulent racists, but Lori-Parks’ script eschews the sharp lyricism of Hari’s writing (“Jazz was the opposite of everything Harry Anslinger believed in”) and its layers of helpful backstory in favor of focusing Anslinger on the task at hand. Anslinger is still a puppet-master who’s determined to weaponize drugs into a war on Black people, but Lori-Parks tweaks one key detail in order to convey how Holiday’s life became a full theater of that war unto itself.

It’s true that Anslinger assigned a Judas-like Black agent named Jimmy Fletcher — played with beautiful immediacy and self-conflicted Trevante Rhodes, whose abs have more depth to them than some entire music biopics — to go undercover in Holiday’s entourage and report on her dope habit, and it’s true that Holiday stripped naked when Fletcher showed up to arrest her. (Why Daniels, of all directors, omits that Holiday also pissed on the floor in protest is a mystery.) It might even be true that Fletcher fell in love with his mark when she went to jail, though a throwaway line in Hari’s book doesn’t quite square with Daniels’ googly-eyed montage of Fletcher listening to Holiday’s records and letting his inner fan take the wheel.

Everything that happens between them in the second and third acts of this movie, however, is the stuff of fiction, though it occasionally borders on the ecstatic truth. Fletcher was not assigned to follow Holiday’s cross-country tour, he never showed up at her deathbed, and if he ever slept with her, he kept it a secret in the interviews he gave before his death.

Yet, in broad strokes, Lori-Parks’ inventions are justified by the kaleidoscopic view they provide of Holiday’s power and weaknesses, what her voice meant to other Black people, and how wounded she was by the ones who’d been convinced to betray her. Fletcher’s role in this version of the story grows cloudier as the film melts towards its complete dissolution (to the point where the part would almost make more sense if he were a figment of Holiday’s imagination), but its wrenching to watch his pride at being one of the first Black federal agents curdle into the realization that Anslinger is using him. Most of all, Fletcher’s tenuous presence in Holiday’s life — he’s accepted into her inner circle even though everyone knows he’s “undercover” — reflects the singer’s remarkable clarity about her plight.

There isn’t a false note in Day’s transformative performance, which borders on possession during the small handful of live-recorded scenes when the movie slows down long enough for her to sing Holiday back to life. But Day gives this movie so much more than just the sweet husk of her voice. Baring her teeth even as she backs Holiday into an endless series of corners, Day sells us on the mottled strength of a woman who’s surrendered every part of herself except for her greatest power; a woman who’s suffered through the ravages of addiction, resigned herself to a string of abusive partners, and found that even fame wouldn’t spare her the indignity of riding the freight elevator at her hotel after selling out Carnegie Hall, and yet still refuses to shut up and dribble when they tell her not to sing “Strange Fruit.”

Day embodies Holiday as a portrait of courage in spite of everything else. She’s a mess and a motherfucker (to borrow her favorite word) and she’s literally willing to ditch her friends on the side of the road if it means getting the world off her shoulders for a minute. But she’d sooner die in the War on Drugs than pretend that it isn’t really a war on her.

Day manages to convey all of this through the febrile haze of Daniels’ storytelling. “The United States vs Billie Holiday” covers so much ground on so few sets that five different newspaper headlines are needed to make sense of every scene, and all but a small handful of Holiday’s biggest hits are flattened into the background like wallpaper. Daniels seems caught between his instinct for impressionism and the more journalistic bent of the source material, as abstract sequences — like the time-bending heroin montage that bleeds Holiday’s formative days as a brothel cleaner into the aftermath of a lynching she happens across while looking for a place to pee on tour — are so clumsily threaded into the film’s biopic structure that the whole movie smudges into an overlong blur of stuff, with Day in the middle, fighting to be heard. “Billie paid her debt to society,” Hari’s book quotes one of Holiday’s friends. “But society never paid its debt to her.” One way or another, that’s never been clearer than it is by the end of Daniels’ film.

“The United States vs. Billie Holiday” will be available to stream on Hulu starting Friday, February 26.